“I'm not upset that you lied to me, I'm upset that from now on I can't believe you.” - Friedrich Nietzsche

For those who have been in the message for long, to question the honesty of William Branham appears almost blasphemous. But the Bible says that we are to discern all things and, in particular, those that claim to be prophets are to be judged (1 Cor 2:15, 1 Cor 14:29) and those in leadership in the church are held to a high standard (Titus 1:6-8, 1 Tim. 3:2-9).

“If you tell the truth, you don't have to remember anything.” ― Mark Twain

A person making things up tries to make himself look good. But someone trying to honor the one who sent him sticks to the facts and doesn’t tamper with reality.[1]

If William Branham told lies, that would make him a false witness, according to the Bible.

And unto the angel of the church of the Laodiceans write; These things saith the Amen, the faithful and true witness, the beginning of the creation of God...[3]

Could William Branham be the messenger to the Laodicean church if he was not honest? If he was a false witness?

Was William Branham honest? If he can be shown to have distorted the truth or if his stories are constantly changing over time such that they vary significantly from their first telling, this would cast doubt on virtually everything that he said. The following list contains issues that raise questions regarding his honesty and truthfulness. Some of these concerns have only recently come to light but they are now sufficient in number that they should raise genuine concern on the part of anyone who is a follower of William Branham.

Initially William Branham's retelling of the story of Congressman Upshaw's healing was in basic agreement with the story as told by the Congressman himself. However, it changed over time to become something that bore absolutely no resemblance to what actually happened. How many other stories that William Branham told were also wildly embellished?

There is a heartbreaking story that is familiar to all followers of William Branham. Bro. Branham first encountered Pentecostal people at a convention in Mishawaka, Indiana. While he was drawn to them and was invited to speak in their churches, he refused to join with them because he listened to his mother-in-law instead of God. And, as a result, his wife and daughter died as a direct result of his disobedience to God. 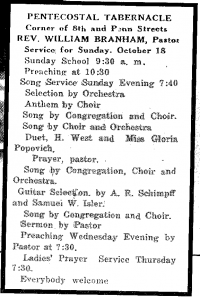 But, is this the truth?

According to Roy Davis and Douglas Weaver, William Branham attended a Pentecostal church pastored by Roy Davis prior to 1933 when he started his own church. Roy Davis himself says that William Branham received the baptism of the Holy Spirit in his home. This all precedes the death of Hope and Sharon Rose Branham in July 1937.

The original name of Branham Tabernacle was the Pentecostal Tabernacle.

This makes the story of William Branham's story that his wife and daughter died because he rejected the Pentecostal people to be highly suspect.

Why did William Branham state that the cloud was directly above him while he was hunting, when it actually appeared 8 days earlier 200 miles away? Why did he say that Life Magazine said the cloud appeared at the same place that he was hunting when it clearly didn't? Why does William Branham state that the pictures in Life Magazine were taken on the day that he heard the blast when they were actually taken over a week earlier?

Plagiarism is the act of taking someone else's work or ideas and passing them off as one's own. Are you aware that William Branham stole multiple messages, doctrines and concepts from other ministers but never properly gave them credit for them. Are you aware that some of these stolen ideas he said came directly from God or the Angel?

Why would he do this when God speaks against this practice in Jeremiah 23:30 - So I, the LORD, affirm that I am opposed to those prophets who steal messages from one another that they claim are from me. (NET)

On December 23, 1962, William Branham relates a vision in which he sees five angels in a constellation. One week later, he changed the number to seven. Why?

In the big lie there is always a certain force of credibility; because the broad masses of a nation are always more easily corrupted in the deeper strata of their emotional nature than consciously or voluntarily; and thus in the primitive simplicity of their minds they more readily fall victims to the big lie than the small lie, since they themselves often tell small lies in little matters but would be ashamed to resort to large-scale falsehoods.

It would never come into their heads to fabricate colossal untruths, and they would not believe that others could have the impudence to distort the truth so infamously. Even though the facts which prove this to be so may be brought clearly to their minds, they will still doubt and waver and will continue to think that there may be some other explanation. For the grossly impudent lie always leaves traces behind it, even after it has been nailed down, a fact which is known to all expert liars in this world and to all who conspire together in the art of lying. These people know only too well how to use falsehood for the basest purposes."[4]