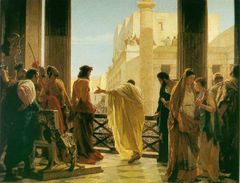 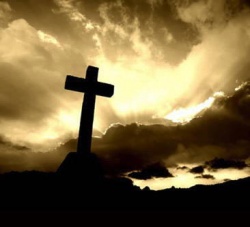 This article is one in a series of studies on Jesus Christ - you are currently on the topic that is in bold:

Jesus is the son of God. Around 7 BC, an angel told a virgin named Mary that she would give birth to a son, and call his name Jesus. On the night of his birth, angels announced his arrival to shepherds near Bethlehem. Shortly after that, an aged man named Simeon and a prophetess named Anna prophecied over the infant child Jesus. A brilliant star also appeared, and led wise men from the east to travel and worship Jesus. As a result of the wise men's story, King Herod had all the children in Bethlehem 2 years and under slaughtered. Joseph (who married the virgin Mary after the birth of Jesus) had been warned by an angel in a dream to leave Bethlehem and go to Egypt with Mary and the young child Jesus, and escaped Herod's slaughter.

King Herod died in 4 BC, which places the birth of Jesus before that time - possibly in 6 BC.

Joseph, Mary, and Jesus later returned to Nazareth, a city 25km west of the Sea of Galilee, where Jesus remained until he was about 30 years old. Jesus' ministry started with his baptism in the Jordan River by John the Baptist, who was declaring the coming of the Messiah. Jesus was then tempted of the Devil 40 days in the wilderness, which he overcame by remembering the holy scriptures. Coming out of the wilderness, Jesus returned to a synagogue in Nazareth, where he stood to read the following scripture from the Prophet Isaiah:

While Isaiah's prophecy of the Messiah continued, Jesus closed the book, and said This day is this scripture fulfilled in your ears. Jesus continued to perform miracles and raise the dead as he travelled around the land. But it was his teaching that frustrated the religious leaders, who asked Jesus for a miraculous sign. Jesus replied to them, saying

It was these teachings that turned the religious leaders against Jesus, who was falsely accused, humiliated, beaten, and finally crucified. Jesus was crucified on a Friday (the Jewish feast of Passover being celebrated on the preceding night) and his body was set in a tomb with soldiers placed in front to guard the tomb from his followers. On Sunday morning, the Angel of the Lord descended from Heaven in the sight of the guards, and rolled back the stone from the tomb. At that moment, Jesus of Nazareth proved that he was the Son of God when he raised from the dead.

Pilate, the Roman Prefect of Judea who presided over part of Jesus' trial, came to power in 26 AD, which places the crucifixion after that time - possibly in 27 AD.

After his resurrection, Jesus continued to instruct his disciples for about 40 days. The only difference was that Jesus now moved like the wind - appearing and disappearing at will. One day while Jesus was speaking to about 500 followers, he began to ascend into heaven, until he disappeared into the clouds. As the crowd stared at the heavens, not knowing what to do, two angels appeared in white garments and said: "why are you standing here staring into heaven? Jesus has been taken from you into heaven, but someday he will return from heaven in the same way you saw him go!”" (Acts 1:11 NLT)

The full life story and teachings of Jesus can be found in the Bible in the books of Matthew, Mark, Luke, and John.

The following are Bible studies that are relevant to these issues: