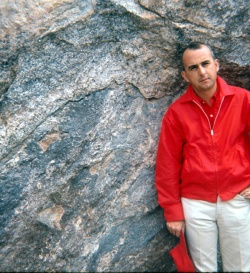 Billy Paul Branham was born in 1935 to William and Hope Branham. Billy Paul's mother and his younger sister Sharon died in 1937, and his attachment and unique relationship with his father formed in the lonely years that followed. Billy Paul Branham said that he met the Angel of the Lord that spoke with his father, and thousands of miracles as he accompanied him through campaigns across the United States, Canada, Africa, and India.

In a book written by Pearry Green called "The Acts of the Prophet", William Branham prophesied that Billy Paul "wouldn't be an old man until sharks will swim right where we are standing", which was in front of the May Company in downtown Los Angeles. Billy Paul is now almost 80, but Los Angeles is still standing.

Billy Paul Branham still travels, speaking of the great things that he witnessed, and is the vice-president of Voice of God Recordings in Jeffersonville, Indiana, whose goal is to distribute the recorded sermons of William Branham. The assets of this corporation at the end of 2012 were in excess of $100 Million USD.

The following testimonies are excerpts (some condensed) from Billy Paul Branham's testimony in 1989 in Surrey, BC. 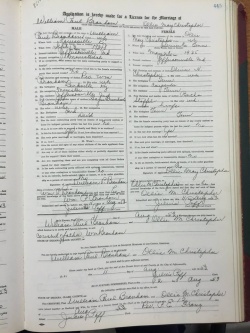 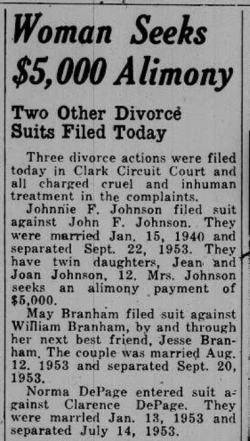 Newspaper article re divorce proceedings between May and Billy Paul Branham 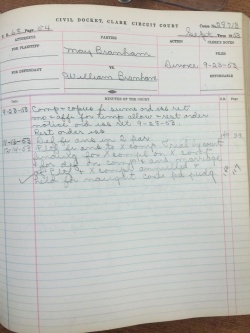 Court docket for divorce proceedings between May and Billy Paul Branham

Billy Paul Branham was married on August 11, 1953 to Ollie May Christopher. The marriage license indicates that William Branham, Billy Paul's father, consented to the wedding. The wedding was officiated by Rev. P.E. Franz. The license was also signed by Julius Poff, an officer of the court.

William Branham stated that Billy Paul had "run off with some little kid still in common school and got married". He also stated that the marriage had been annulled by himself and the girl's father after they found out about it.

But the truth is that May Branham, Billy Paul's first wife, filed for divorce from her husband a mere 43 days after they were married. Additionally, a restraining order was issued and the marriage was annulled as a result of the divorce proceedings.

Why did William Branham find it necessary to lie with respect to his son's first marriage that the marriage was not conducted by "magistrate" but by an ordained minister?

Did William Branham also lie about whether he had consented to the marriage (according to the legal documents he had). If Billy Paul was the one who lied on the marriage license, why did both the court officer and the minister who married them believe the lie?

Additionally, if the date of Billy Paul's birth is correct on the marriage license, then this is evidence that William Branham and Hope Brumbach were married while she was pregnant. Was Billy Paul conceived out of wedlock?

The following letter was sent to Billy Paul Branham on January 28, 2017:

I left the message in 2012 after a 5 year search for answers which never came. The only responses I got from everyone I communicated with, including Joseph Branham, was robotic in nature. In other words, I had to ignore what I saw, and accept the evident discrepancies in the words and/or message as truth by faith, because Brother Branham said so.

You are probably in the most favorable position to answer this question which bother me in no uncertain terms. I heard you tell the story of how you and your dad were standing in front of May's department store in downtown Los Angeles. You dad wanted to know from you where you were standing, and you replied, "Downtown LA", to which he replied, "be more specific". You said, "in front of May's Department Store", to which he replied, "Billy, I may be gone, but before you are an old man, sharks will swim where you stand."

Brother Billy, you are over 80 and definitely not a young man any longer. Do you still feel it will happen as you told us all those years? Or.....is it a story you invented to keep us loyal and expecting?

It is important for us to know because if it is the truth you told....it would mean Brother Branham gave a false prophecy. If it was not the truth, you have a responsibility to set the record straight.

I trust that you will get this letter, and that we shall see a response from you personally to put this prophecy/story to rest.

Thank you in advance for your favorable response.

Your brother in Christ,

The response to the above letter came to Curtis Walling via Facebook on January 29, 2017 as follows:

I stand on exactly on what Brother Branham said, and it was not a story I made up and shame on you for thinking such a thing so I doubt you would believe me or not but I will witness to you just the same it is exactly what he said and I'm not an old man as yet, and won't be until that happens.

The question was asked the other day, "Was a annulment—annulment—an annulment the same as a divorce?" See? When you ask me those questions, friend, you don't know what that does to me. I've got many friends setting here that's married two or three times. Did you realize I'm talking to my own son, Billy Paul? Would I spare Billy Paul? No, indeedy.

Billy Paul got married to some little girl, and come up, and said, "Daddy, I'm going to get married." I was washing my car; I said, "Butt your head against the wall," just kept on washing my car like that.

He said, "I'm going to get married." I said, "Oh, go on," just kept on like that. He goes around and tells his mother, and his mother laughed at him. You know what he done? Run off with some little kid still in common school and got married.

He said, "Daddy will you marry me?" I said, "By no means." That's my own son. You think that don't cut me to the core when I packed him in my arms and done everything I could do, and I've been both father and mother to him? You think that don't kill me to say that? But it's the truth. Certainly. My boy setting here listening at… My daughter-in-law and my little grandson setting right here now… But I tell him it's wrong (See?), because I've got to. I'm duty bound to that Word.

And I say, you got married by a magistrate? You should've been married by the church, by the minister. That's the decent thing to do for a Christian. But being that you have already made that promise, and vow, and been married twenty-one years ago, I think it's all right. You say, "Well I…" The question might be, "Should I come and be married again?" If you wish to. Don't have nothing in your mind that bothers your faith, 'cause if anything's there, you can't go no further than right there; you stop right there. When that question mark come, that's where you end, right there. But I, for me it would be all right.[1]