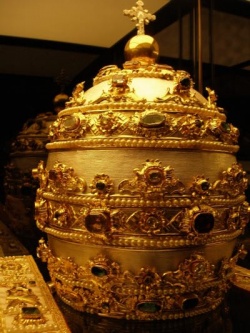 An example of a papal tiara. Contrary to William Branham's claims, no tiara has ever been inscribed with the phrase Vicarius Filii Dei.

William Branham stated that he had been to the Vatican in Rome and had seen the following inscription above the throne of the Pope - VICARIVS FILII DEI.

William Branham was not being honest when he stated that "I been right there and seen it myself".

Here are the facts:

The phrase "VICARIVS FILII DEI" is first mentioned in "The Donation of Constantine", a forged Roman imperial decree by which the emperor Constantine the Great supposedly transferred authority over Rome and the western part of the Roman Empire to the Pope in the 4th century. It was probably composed in the 8th century and was used in the 13th century to support claims of political authority by the papacy. It contained the following Latin statement:

The earliest record of a Protestant writer addressing the phrase "Vicarius Filii Dei" is Andreas Helwig in 1612. In his work Antichristus Romanus he took 15 titles in Hebrew, Greek, and Latin and computed their numerical equivalents in those languages, arriving at the number 666 mentioned in the Book of Revelation. Out of all these titles, he preferred to single out Vicarius Filii Dei, used in the Donation of Constantine.[2]

Some later Protestant figures claimed that Vicarius Filii Dei was an official title of the Pope, with some saying that this title appeared on the papal tiara and/or a mitre.

In 1875, Uriah Smith wrote the following, which we must assume is where William Branham got his information:

The most plausible name we have ever seen suggested as containing the number of the beast, is the blasphemous title which the pope applies to himself, and wears in jeweled letters upon his miter or pontifical crown. That title is this: Vicarius filii Dei: “Vicegerent of the Son of God.” Taking the letters out of this title which the Latins use as numerals, and giving them their numerical value, we have just 666. Thuse we have V, 5; I, 1; C, 100; (a and r not used as numerals;) I, 1; U (formerly the same as V), 5; (s and f not used as numerals;) I, 1; L, 50; I, 1; I, 1; D, 500; (e not used as a numeral;) I, 1. Adding these numbers together, we have just 666.

The following extract on this point is from a work entitled “The Reformation,” bearing the date of 1832:—

“Mrs. A., said Miss Emmons, I saw a very curious fact the other day; I have dwelt upon it much and will mention it. A person, lately, was witnessing a ceremony of the Romish church. As the Pope passed him in the procession, splendidly dressed in his pontifical robes, the gentleman’s eye rested on these full, blazing letters in front of his miter: “VICARIUS FILII DEI,” The Vicar of the Son of God.” His thoughts with the rapidity of lightning, reverted to Rev. 13:18. Will you turn to it? said Mrs. A. Alice opened the New Testament and read: ‘Let him that hath understanding count the number of the beast; for it is the number of a man; and his number is six hundred threescore and six.” She paused, and Miss Emmons said, He took out his pencil, and marking the numerical letters of the inscription on his tablet, it stood 666.”[3]

William Branham admitted that he read the works of Uriah Smith, a Seventh Day Adventist author:

And, here, I’d go in there and pick up the notes. I’d pick up books of Dr. Smith, Uriah Smith, and, oh, all the—the writers and everything, and read in, read down in their books.[4]

Catholics have responded to these Protestant claims by noting that "Vicarius Filii Dei" has never been an official Papal title. They also answer the claims that "Vicarius Filii Dei" is written on the Papal Tiara by stating that a simple inspection of the more than 20 papal tiaras still in existence—including those in use in 1866 during the reign of Pope Pius IX when Uriah Smith made his claim—shows that none have this inscription, nor is there any evidence that any of the earlier papal tiaras destroyed by invading French troops in 1798 had it.[5]

In November 1948, "The Ministry", the official publication of the Ministerial Association of Seventh-day Adventists, published an article by LeRoy Edwin Froom, its editor, entitled, "Dubious Pictures of the Tiara" which stated:

Each pope, like any other sovereign, has his own tiara, which is the papal crown. There is, therefore, no one tiara that is worn by the full succession of papal pontiffs. Moreover, personal examination of these various tiaras, by different men back through the years, and a scrutiny of the pictures of many more, have failed to disclose one engraved with the inscription Vicarius Filii Dei. There is none such definitely known to exist. As heralds of truth, we are to proclaim the truth truthfully. No fabrication should ever becloud our presentation of truth. ...Recourse to any unreliable and fraudulent evidence discounts the very message that we are commissined of heaven to give to men, and reflects upon the honesty of the messenger.

...Truth does not need fabrication to aid or support it. Its very nature precludes any manipulation or duplicity. We cannot affford to be party to any fraud. ...We must honor the truth, and meticulously observe the principle of honesty in the handling of evidence under all circumstances.

Well, it isn’t over…the Latin—the Latin words isn’t over the Vatican City; it’s over the throne of the pope, where he sits on his throne. It’s wrote up there, “VICARIVS FILII DEI.” If you wish to, in the morning, I’ll bring it wrote out, everything, and put it on a piece of paper. And if you want it, why, I’ll bring it to you in the morning. Where you can spell it out in Roman letters, VICARIVS FILII DEI, the word means “Instead of the Son of God”; he is the successor to the Son of God.

Now, I got the Facts Of Our Faith, it’s called, in the Catholic church, ’cause my people were Irish Catholic. So I know what I’m speaking of. See?

And it absolutely is the truth, that’s right, that there… And the Bible said that “He’ll be sitting in a church, or a—a place, or a church that sets on seven hills in Rome, and his power will go to all the world. And he is called the antichrist.”[6]

I stood right there in the Vatican City and verified it with the Bible. The pope wearing a triple crown, Vicarivs Filii Dei, all those things which I’ve heard and so forth, it’s absolutely the truth; a religious group that governs every nation under the Heaven, and it does. There it is, it’s so.[7]

Now, go on over here in Revelations 13, and show you that this man sets on a city…in a city, and the city sets on—on seven hills. And the numbers of the beast is six hundred and sixty-six, wrote out in the—in the Latin…Roman alphabet, is six hundred and sixty-six, is VICARIVS FILII DEI, which is, “In stead of the Son of God,” on a pope’s throne. And his chair, got a triple crown. And I’ve looked right at the crown, stood as close as my hand is to my face, like that, and—and seen the decked crown of the pope right there in the Vatican, myself, stood and looked at it, be sure I know what I was talking about. “He opposes, himself above all that’s called God, all the godly men. He’s the holiest of all of them; sets in the temple of God, just showing himself he is God,” forgiving sins on earth, and so forth, you know. Sure.[10]

Donny Reagan of Johnson City, Tennessee continues to be involved in bad research:

“Notice in other words, up over the Vatican (now have been right there), it's wrote “Vicarius Filii Dei”. And it's wrote in roman numerals. Now if you take Vicarius Filii Dei and draw the line, the roman numerals, V for five and I for one, add it up and see if you haven't got 666. now it's been talked about, it's been believed, it's been pretty much accepted by a very great large margin of even Christians. Now Vicarius Filii Dei has been written there in the symbolism of Rome for hundreds and hundreds of years. Adam Clarke, Coke, Ellicott, many of those men wrote about it in the 1500s, the 1600s, the 1700s, and called it the Popish church and called rome the mother whore.”

William Branham mentions on numerous occasions that HE PERSONALLY SAW the Latin phrase “Vicarius Filii Dei” above the throne of the pope in Rome.

“Been right there and seen it myself, would know, up over his place (his throne, as it was) like they set the first Boniface up, the III, up at the beginning of the Catholic age here. And up over there it’s Vicarivs Filii Dei, which means “a vicar of the Son of God.””[11]

But William Branham never saw the Latin Phrase “Vicarius Filii Dei” when he was in Rome. He was not telling the truth.

William Branham mentions several times that he read the books of Uriah Smith, a seventh day Adventist author. Smith states, in at least 2 of his books, that the Latin phrase was engraved on the papal miter or pontifical crown and details how to calculate the number 666 from the phrase.

However, Uriah Smith admitted that he never saw the phrase himself and acknowledged that it first appeared in a forged document, The Donation of Constantine, which was created sometime in the 8th century.

What we know is that the phrase

Donny Reagan sounds like he has done his research when he says that his assertions are commonly accepted as facts. He even references Adam Clarke, who died in 1832, and Charles Ellicott, who died in 1905. The problem is that he is ignorant of the research done in the past 75 years which completely debunked the claim. The Seventh Day Adventist church publicly acknowledged Uriah Smith’s error in 1948:

Personal examination of these various tiaras by different men back through the years, and the scrutiny of the pictures of many more, have failed to disclose one engraved with the inscription “Vicarius Filii Dei”.

They also admitted that an artist faked a photograph of a tiara so that it appeared to bear the Latin inscription and that the Seventh Day Adventist Church would not be party to such fraud.

William Branham made up this story. To do so, might cost them some of their followers. And that would mean their incomes would suffer.

Why did William Branham make up this story of seeing the inscription in Rome? We don’t know. But he was certainly aware that his followers would never question him.

Did you know that you can also get 666 from the name of the Caesar Nero who killed Peter and Paul?

Don’t believe me… or any message minister… about these things, be like the Bereans and do the research yourself.