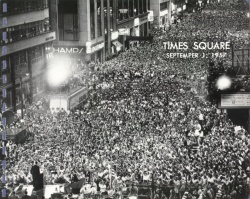 Proof of a failed prophecy
Billy Graham in NYC in 1957

Billy Graham also figures significantly in our article on The Importance of a Seven-Lettered Name.

A prophecy about Billy Graham?

Nineteen fifty-six I prophesied in Chicago that Billy Graham that year would return and cancel his meetings. Tommy Osborn would return, and America would see its last call. And from then the revival would die. I just count back and see. We got that on record. See? And the revival is gone.[1]

We have a record of everything William Branham stated about Billy Graham in Chicago:

“Go ye into all the world; preach the Gospel to every creature.” That’s one commission. That’s right. Billy Graham, Jack Shuler, many of the other great men are doing that. [2]

I’m not saying, as our Brother Billy Graham said, “Answering my critics.” I so thankful I have so few critics.

...And I looked at the wheels turning up. I notice the great, famous evangelist, Billy Graham, he come back from overseas and he staged his meetings, New York and these great places, to hit the very nerve center, and so forth. And I see that, Brother Roberts excommunicated out of the foreign country. Mr. Arganbright wants me, after June, and them, to go into Germany, back down into South Africa and through there, but something is holding me to America. And all the others seems to be the same way. And I believe that America is going to get her last call, this year. [3]

The other day I read a letter from a sister who was with Billy Graham and them down in—in Saipan, Brother Moore’s daughter. [4]

And now, I’ve left my hometown when Billy Graham was over there. And I’ve always wanted to meet Billy Graham. And he’s in Louisville now, preaching. My family and them’s attending. Our churches are closed and everything, a cooperating in the meeting to do everything we can to put the effort. I live about where eighty-five percent of the alcoholic beverages is, that swindles these drunken people on the streets, comes from Louisville, Kentucky. And the tobacco factories, it’s the seat of Satan. And you people in Chicago pray that God will anoint that evangelist Billy Graham till there’ll be a revival break out in Louisville and will just start something. And now, pray for him. And I pray for him all the time, each day and every night and everything. ’Cause God’s using the man in a great way. A very fine brother, so I am told.[5]

In 1956, Billy Graham conducted at tour of India, Taiwan, Hawaii, Hong Kong, Japan, Korea and the Philippines which started on January 17 in India and ended in Honolulu on March 11. The Bombay rally on January 20, 1956 was canceled because of riots, however, none of the remaining Indian or Asian meetings were cancelled. He held numerous meetings throughout the US in 1956 including an almost month long crusade in Louisville, Kentucky from Sept 30 to Oct. 28, 1956. Dr. Graham went on to hold rallies in St. Louis, MO in the last week of November and in Buffalo, NY on Dec. 13-14.

William Branham was aware of Billy Graham's meetings in Louisville. Why did he choose talk about them in 1956 but ignored them in recalling his "prophecy"?

And, then, I think that the hour has arrived that this part of the country ought to receive a great visitation, on the coming of our noble brother, Billy Graham, to Louisville, this coming week. He begins the same time, Louisville, I begin in Chicago. So, I’ll be back, through, I—I want to meet him, personally, while he’s here. And some friends is going to introduce me to him. And I’ve been right in the same city, overseas, and many different places, but just, so, we didn’t get to meet each other.[6]

It is clear that William Branham was unaware of his 1956 prophecy (or at least did not believe it) when he prayed in 1958:

Lord God... let men come to themselves and realize that just belonging to the church isn’t what You require. You want men to be filled with the Spirit, born, hewed out, burnt in with the Holy Spirit, branded, men who has crossed the line, God-called men. And we believe that You’re going to send the revival that Billy Graham and many others are praying for. When You can get men out to themselves, away from their school of theology, away from their self-styled ways, fearless men, men of—of character with You, who believes You and takes You at Your Word.[7]

There is a record of a 3 day meeting being cancelled in Waco, TX in 1965. Additionally, Dr. Graham announced the cancelation of meetings in Dec 1967 as a result of being diagnosed with pneumonia. Those are the only recorded meetings that were cancelled from 1956-2005 according to the records of the Billy Graham Evangelistic Association[8]

In 1957, Billy Graham held the longest evangelistic crusade in his life - a 16-week revival in New York City, where 2.3 million gathered at Madison Square Garden, Yankee Stadium, and Times Square. On September 22, 1991, Graham held his largest event in North America on the Great Lawn of New York's Central Park. City officials estimated more than 250,000 in attendance. In the 10 years from 1947 through 1956, Billy Graham held 64 crusades. In the 10 years from 1957 to 1966, Graham held 119 crusades. And from 1967 until his last crusade in New York City in 2005, he held another 234 crusades, for a total of 417 crusades held during his lifetime. After 1956, when William Branham said that Billy Graham cancelled his meetings (there is no evidence that this happened in 1956 in which Graham held 3 crusades after his return from an overseas tour).

As of 2008, Graham's estimated lifetime audience, including radio and television broadcasts, topped 2.2 billion.

Conclusion: We are faced with one of two possible answers to William Branham's comments in 1962:

But one has to ask the question: Why was William Branham saying things in 1962 that were blatantly false? Was it because his own ministry faltered badly in 1956 and never recovered, while Billy Graham continued on strong for many decades?

The Bible does not contain the words "as it was in the days of Sodom". We do read the following in Matthew 17:28-30:

Likewise also as it was in the days of Lot; they did eat, they drank, they bought, they sold, they planted, they builded;  But the same day that Lot went out of Sodom it rained fire and brimstone from heaven, and destroyed them all.  Even thus shall it be in the day when the Son of man is revealed.[9]

Genesis 18 & 19 tells us what happened to Abraham:

And the LORD appeared unto him in the plains of Mamre: and he sat in the tent door in the heat of the day; And he lift up his eyes and looked, and, lo, three men stood by him: and when he saw them, he ran to meet them from the tent door, and bowed himself toward the ground...[10]

And there came two angels to Sodom at even; and Lot sat in the gate of Sodom: and Lot seeing them rose up to meet them; and he bowed himself with his face toward the ground...[11]

The problem is that William Branham ran the metaphor much farther than scripture takes it. Here are a couple of things to note:

But now Oral Roberts and Billy Graham are dead! Did the angels to Sodom die before it was destroyed? How does that work with William Branham's faulty typing of the scriptures?

The answer: It doesn't!

Well, that’s exactly what the Bible said, “As it was in the days of Sodom, so shall it be in the coming of the Son of man.”[14]

Abraham, which was a type, he…We, only being dead in Christ, take on Abraham’s seed, and are heirs with him according to the promise. Any of you in the court, this afternoon, knows that. Watch Abraham. He received all kinds of signs, everything, from the supernatural God in the form of a Light, going between sacrifice. He received Him in a voice, and so forth. But the last sign that Abraham received upon the hill from Sodom, just before the Gentile world was destroyed, was God Himself in the form of a human Being. You understand, court? [Congregation says, “Amen.”—Ed.] There was three Messengers come up to him. Three Messengers, and he went out to meet them.

Two of them, a modern Oral Roberts and Billy Graham, goes down into Sodom and preach the Gospel, and blinded them with their Gospel. But this One that set back there, that eat the flesh of a calf, drank the milk from a cow, and eat bread, and Abraham washed His feet. And He set there, a Man. And He said…[15]

God making Himself known among His people like He did to Abraham, by His promise here that the Son of man would reveal Himself in the days that the world become in a Sodom condition.”

And there was three messengers went forth, come down from Heaven. And there was a denominational group down in Sodom, and a Billy Graham and a Oral Roberts went down there. And remember as I’ve told you, nowhere in the history of the church has there ever been a messenger sent universal to the church, until now, with his name ending like Abraham, h-a-m. G-r-a-h-a-m, six letters, to the world, man’s number.

But Abraham had seven letters in the name, God’s complete and perfect number. See? And notice what the messengers did that went out in there: preached the Word, called them out, told them to repent.

But the One Who stayed back with Abraham, see, performed a miracle by telling Abraham what Sarah was doing and thinking in the tent behind Him. And Jesus, Who was the One that was in this Person, said, “When the world gets in a Sodom condition, like it was then, the Son of man will be revealed again.” And all the other Scriptures confirming that to be so.[16]