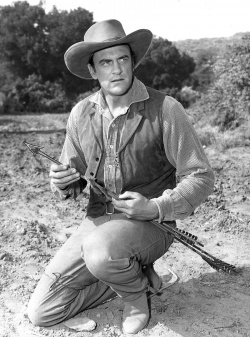 Marshal Matt Dillon was a fictional character featured on both the radio and television versions of "Gunsmoke". In the program, he served as the U.S. Marshal of Dodge City, Kansas, who worked to preserve law and order in the western frontier of the 1870s.

In the radio version, Marshal Dillon spoke of actual persons who were well known in the history of the American West, including Wyatt Earp and Billy the Kid (whose "supposed" origin figured in the very first episode of the radio series), and he often referred to Wild Bill Hickok as being a close personal friend.[1]

Please note how authoritatively William Branham talks about how things were in real life for this fictional character. This is the same authority that thousands are looking to as their absolute interpreter of scripture, and trust their souls on what he says.

Now, Hollywood is full of--of the gunfighters. Now, anyone that knows history, knows that them people back there in them days, that was gunfighters like the--the different fellows, they wasn't decent citizens, they were renegades, they were like Al Capone and Dillinger. They got a Hollywood play they call, on--on the television, they call, "Gunsmoke." And I heard on the monitor the other day that the fellow that plays it, Arness or something, or Arness, or I forget what his name is, and he's supposed to take... He represents Matt Dillon who was a sheriff in Kansas. And Matt Dillon was as yellow as a rabbit. He shot twenty-eight man in the back, innocent people, going outside of Dodge City and waiting in a bush. And when a man come along, that somebody would call him and tell him that there was a certain villain coming through, then stay out there and, when the man come in, he'd shoot him through the back. Now we find he's "big guy" that comes down. Why, it's--it's absolutely glorifying sin. But the little children of our country can tell you more about Matt Dillon than they can tell you about Jesus Christ. The--the--the stores, the ten-cent stores, and the clothing department, is hanging full of little--little toy guns, with little hats that--that you could buy anywhere. It's all right to wear that, but I'm--I'm just telling you, you see. Then they--they, the commercial world, picks that thing up and makes millions of dollars off of it.[2]