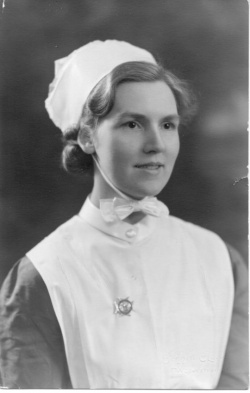 Many have listened to William Branham's life story, brushing tears away when they heard the story of Hope Branham's death.

How well do you know the story?

In particular, do you know the story of Hope's nurse?

Initially she didn't have a name

"Friends, if I'll live a hundred years, I'll never forget what happened. Those two big brown eyes looked up at me. She was so weak she couldn't say nothing. She was smiling. She took her finger and she motioned. And I got down, and she said, "Why did you call me, honey?"
And I said, "Well, they..." I said, "I don't know."
She said, "Oh I--I was in another land." She said, "It was so peaceful. I wasn't suffering." She said, "Great big birds like a great Orion." And she said, "There was man dressed in white, one on each side, taking me to my home."
Oh, friend. There--there's a land somewhere. I believe as she was dying, her eyes just opened up to see paradise beyond. She rallied for a little bit.
The nurse come in. And she said, "Nurse, come over." She said, "I hope when you get married, you'll have a husband like mine." [1]

Her name was Evelyn

About that time the nurse run in, said, "Reverend Branham, here." Said... "You had that little medicine?"
I said, "No."
She called the nurse, Miss Cook. She said, "Come here." She said, "Set down just a minute. I've just got a few minutes left."
And she was Hope's friend. And she was biting her lip.
She said, "When you get married, I hope you get a husband like mine." And that... You know how it made me feel. She said, "He's been good to me, and we've loved each other the way we have." And said, "I hope you get a husband like mine."[3]

I'm starting to get a bit confused, Hilda

Just then the nurse come running in; she said, "Reverend Branham, you'll have to come out." And she said, "Come here, Hilda," it was a friend of hers. And here's what made me feel. She said, "I hope when you get married you have a husband like mine. He's been so good to me, so understanding." You know how it make you feel.[4]

Louise Hale? How could I forget her?

If she had her arm around me, it was definitely Juanita

Just then, the nurse run in, said, "Reverend Branham, you can't stay in there."
I said, "Just a minute, nurse." We knew her real well.
My wife called her over. She said, "Juanita," said, "I hope when you get married you have a husband like mine." Said, "He's been so good to me," and she had her arm around me.
And I said, "What was you talking about, honey?"
She said, "Bill, I was being taken home." The nurse left the room.[6]

Retrieved from "http://en.believethesign.com/index.php?title=Hope_Branham%27s_Nurse&oldid=20576"
Category:
This page was last edited on 22 August 2015, at 04:46.
Content is available under Creative Commons Attribution unless otherwise noted.
Privacy policy
About BelieveTheSign
Disclaimers
Mobile view