So it turns out that William Branham became the big-game hunter that he condemned so harshly. To quote John Oliver, "he's like a psychotic reverse-Noah."

Plus, how much money would it have cost to ship 33 large game animals back to the United States? 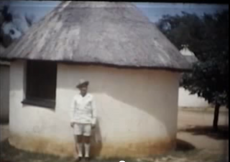 Oh, what a perversion! What a age! What a time we're… How deceitful it is! Oh, all these things, "and don't know it," a perfect perverted spirit is in the man. He is veiled from the lust of Satan, and the woman is, too. It's a satanic spirit of a great society. See, they don't know, but they're a organization. Women with shorts on, belongs to an organization. Man dressed like that, is on a organization. I'll give you the abbreviation of it, B.S.S., Big Sister Society, so that's what they belong to. Come out there, a big sissy society, with them little old pants on, big old knotty-looking, dirty-looking thing. I—I…

Man, now you may differ me with this, but that's the Truth. You have been perverted and don't know it. You're not, don't act like a man no more. See, coming so soft; and, their son, will be nothing to them anymore; man, and women, too. They are a society. There is a organization. Why? "John, next door, wore shorts, so why can't I? Luella wanted me to wear them because John wore them, next door. And, well, if—if Susie Jane can wear them, so can Martha Jane wear them, or Susie Lou," or ever who her name is, see. See, it's a society. It's an organization. You spiritually belong to it, and don't know it.[1]

On June 1, 1963 William Branham says watched Marilyn Monroe in "The River of No Return",

"The kids had been telling me, "Daddy, you go down that River Of No Return, all the time," Said, "They got a play like that on, tonight." They told me a certain night it would be on, a week or two ahead of time. I thought, "Well, I want to see that, 'cause I've been down that river, two or three times; about five times, I think." Well, I--I went to see it. And Miss Marilyn Monroe acted that out." [2]

Then on June 23 of the same year he says that he had never seen her:

"When I seen this woman not long ago, in a vision the Lord showed me, see her die. That, I can't never think of that woman's name, she, Marilyn Monroe. And I had never seen her. I don't go to movies." [3] 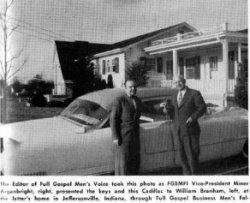 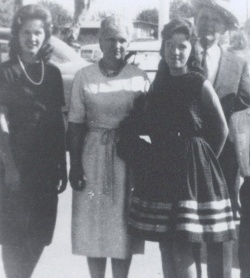 Look at the modern one today. Little skinned-down dress, that, every form, she can't move without sinning. Walking, tipping down the street, with all the makeup and cosmetics a Max Factor can put on her, nearly. Fixing her hair like some little girl. Wearing a little skirt just up, about, above her knees, if she's got on any, at all. But, you look at her, she is pretty. Satan knows how to do it. He's the author of beauty, that type of beauty which results in sin. [5]

I was preaching here in Phoenix, not long ago, on something like that, and the minister's wife setting on the pulpit, with one of these boyish bobbed hair all kinked up, and with a dress that she couldn't even keep her underneath skirts from shining. Couldn't get down over her knees. About four or five inches above her knees, setting up there; jumping up-and-down, leading songs. I blasted it just as hard as I could. Course, he won't invite me back. I don't expect to. But he knows what's right and wrong. When I stand at the Judgment, it's not on my hands anymore. [6]

I've passed across this country. I've made remarks about Mrs. Kennedy, with her Jezebel haircut, and all like that, and her big waterheads, and these women. I wonder, if Mrs. Kennedy would have heard the Messages I have preached, she might have let her hair grow out, a long time ago. But I've crossed this country, back and forth, showing by the Word, that it's wrong, and a condemnation for women to cut their hair, and the Pentecostal women continue, go on the same way. She might rise in the day of Judgment, not knowing it, but you know better. It shows the Blood hasn't been applied. The Token is not there.' [7]