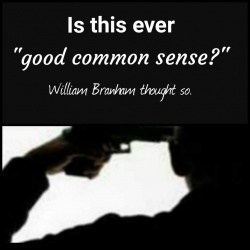 As with most issues, William Branham has some strange opinions on the subject of suicide.

Throughout the history of Christianity, there has been a rejection of suicide. The Christian prohibition of suicide is clearly based on an assumption that our lives are not ours to do with as we please. Life is a gift from God. But this did not appear to be the view of William Branham.

William Branham approved of suicide if it was "good common sense"

One man had enough—enough good common sense up here. That said he was going to be a preacher, he'd get on Sunday morning and preach, and then he'd go down there on… and get on the radio broadcast and sing rock-and-roll songs and everything like that, so he finally took a pistol and blowed his brains out. I respect the man for doing it. That's right. That's right. He—he had more… He had as much sense as them hogs did, anyhow, when they got the devil in them they run down to the water and choked. Some people don't even have that much.[1]

William Branham claimed that the composer of the great hymn "There is a fountain, filled with blood" committed suicide just after he wrote the song.

However, his information was incorrect. The hymn was published in 1779 but was written some years prior. At age 69, Cowper became ill with dropsy (edema) in early 1800 and died off heart failure on April 25, 1800.

How many read of William Cowper, the great English poet? You know, wrote, "There is a fountain filled with Blood, drawn from Immanuel's veins." After he wrote that song, did you hear what happened to him? I stood by his grave not long ago. He tried to commit suicide, and drowned in the river.[2]

It is interesting to note that William Branham said he visited Cowper's grave in London:

In London, England… And I stood there by his grave, and I laid my hand over on the tombstone, and I thought, "God rest your gallant soul." I thought, "Mr. Cowper, why were you considered a neurotic?" You know, after he wrote that song, "There is a fountain filled with blood, Drawn from Emmanuel's vein," he came out of that inspiration and got—went down to the—to a cab—tried to find the river to commit suicide, to drown himself in the river. William Cowper; that's his history right there by his grave.[3]

But Cowper was not buried in London. He is actually buried in the chapel of St Thomas of Canterbury, St Nicholas's Church, East Dereham, which is over a 100 miles northeast of London.

Why would William Branham make up such a convincing story about something that was completely untrue?

William Branham stated, contrary to scripture, that Saul did not kill himself. Why did William Branham contradict scripture? It appears he simply did not read the Bible carefully.

Here are the problems with William Branham's view of Saul's death:

1. The Bible clearly states that Saul killed himself in 2 separate passages:

...Saul took his own sword and fell on it.  When the armor-bearer saw that Saul was dead, he too fell on his sword and died with him.  So Saul and his three sons and his armor-bearer and all his men died together that same day. [5]

Saul took his own sword and fell on it.  When the armor-bearer saw that Saul was dead, he too fell on his sword and died.  So Saul and his three sons died, and all his house died together.[6]

2. In an attempt to gain favour with David, an Amalekite misjudges the reaction of the one he wants to impress. It is clear that his story does not tally with the events already recorded: Saul had not needed assistance in dying by his own spear. The Bible clearly states that he fell on his own sword.

Then David said to the young man who brought him the report, “How do you know that Saul and his son Jonathan are dead?”
“I happened to be on Mount Gilboa,” the young man said, “and there was Saul, leaning on his spear, with the chariots and their drivers in hot pursuit.  When he turned around and saw me, he called out to me, and I said, ‘What can I do?’
“He asked me, ‘Who are you?’
‘An Amalekite,’ I answered.
“Then he said to me, ‘Stand here by me and kill me! I’m in the throes of death, but I’m still alive.’
“So I stood beside him and killed him, because I knew that after he had fallen he could not survive. And I took the crown that was on his head and the band on his arm and have brought them here to my lord.” [7]

3. The Bible clearly states the man was an Amalekite and not a Philistine.

Here is yet another clear example of William Branham apparently not understanding the clear meaning of scripture.

William Branham claimed that the great American songwriter, Stephen Foster, died of a self-inflicted wound to the neck:

In fact, Foster became ill with a fever in January 1864. Weakened, he fell in his hotel, cutting his neck. His writing partner, George Cooper, found him lying in a pool of blood. He died in hospital three days later, at age 37.

Here is William Branham's version of the story:

How many every heard of Stephen Foster, give America its best folk songs? He had it in the head but not the heart. Every time inspiration would hit him, he would write the song. Then when the inspiration left him, he didn't know what to do with himself, and he was lost. He—he—he had been on a drunk. And finally when he started to come out of that inspiration, he called a servant, and took a razor and committed suicide. That's right.[8]