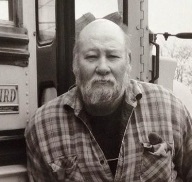 Photograph of Arvel Mosier from the Generation book.

Looking to be a Part of the Tent Vision

"Then Mother, who had been listening real close, said, "That's nothing but the truth."
"The next thing you know, he told Mother to ask for anything she wanted, anything in the world. And I can remember her saying that she wanted the salvation of her two boys. Later, we were baptized at the Tabernacle. I was 15 years old."

None of these things are mentioned in Arvel's version.

"Hattie Wright, she, I guess she's here this morning, sitting right there. She was the first one, when we seen those squirrels; and she knowed the commission about that, and when them seven straight times that God created something. I said, "That's the same God that could create a ram for Abraham, to convince him of his commission; is the same God that can create a squirrel, because that's what I had need of." Little ol' Hattie Wright there, sitting in the back of the building. With her heart off the things of the world, she was believing. She said, "Brother Branham, that's nothing but the truth."[2]

"And little ol' Hattie setting back there, said, "Brother Branham, that's nothing but the Truth!"

...I said, "Sister Hattie, THUS SAITH THE LORD, you said the right word like the Syrophenician woman said. The Holy Spirit's speaking to me now, and said for me to give you the desire of your heart."

...Her boys had got to be regular 'Ricky's,' school days, you know, and just sassing their mother; and fifteen, sixteen years old. And, oh, they were standing over there laughing at what I was saying.

...She said, "Brother Branham, the greatest desire in my heart is the salvation of my two boys."

...I said, "I give you your boys, in the Name of Jesus Christ." And them snickering, laughing, fun making boys fell across their mother's lap, and surrendered their life to God, and was filled with the Holy Ghost right there. Why? That is Truth! God has the authority to kill me, before these people across the nation.[3]

William Branham died less than a month after this last statement.