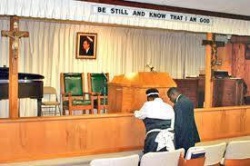 This is a small representative of the various sects in the Message, most of which don't talk to each other. There is also the "Seven Thunders" movement, the "Bride Coming" group, and those that simply follow charismatic or dominating local personalities.

Question 1: Are you lukewarm, and in the Message?

Question 2: Do you have a charismatic, but dominating pastor? Find out more on the dangers of this situation.