Julius Stadsklev joined William Branham, F.F. Bosworth, Billy Paul Branham and Ern Baxter during a 10 week missionary trip in South Africa during October, November, and December of 1951. In 1952 Julius Stadsklev published a book entitled "William Branham, A Prophet Visits South Africa" in which he described many of his first-hand experiences, and included numerous photographs, newspaper clippings, and written testimonies of the people who were healed during these meetings. Copies of this book can still be found for sale on the internet.

The first evening that we were in East London it was very windy at the beginning of the service. Just as Brother Branham came to the platform, the wind subsided and it became very quiet...The following Friday we had a similar experience with rain. It looked as if the meeting would have to be disbanded. But as Brother Branham arrived at the grounds, it stopped raining and within a few minutes the sky was clear. (A Prophet Visits South Africa, pg. 112)

Friday Brother Branham went downtown to buy a pair of slippers. Going into Cuthberts Shoe Store, he was approached by a clerk who recognized him. The clerk pointed out a man, just walking out of the store, who had been in and bought his first pair of shoes in twenty years. His feet had been so deformed that he was unable to wear shoes. During the first evening service there in Durban when Brother Branham prayed for the people as a whole, this man received his healing and now his feet were normal. (A Prophet Visits South Africa, pg. 120)

Young lady healed of a broken back 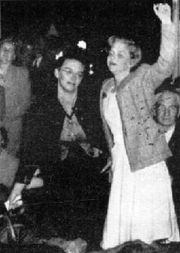 That same evening a young girl about fourteen years of age was carried in on a cot by Red Cross workers. She also had a broken back and was crying because of the intense pain she was suffering. During the meeting, Brother Branham pointed to her and said, "Your back has been broken. Jesus Christ just healed you. Stand up and accept your healing."

At first the girl could not believe what she had heard. She said "Who me?"

At this, she stood up. Her mother had been sitting on a chair next to the cot and when the girl got up her mother stood up too. She was so overcome with joy that she fainted and fell on the cot that the girl had just gotten up from. We also have their picture which was taken just a few seconds before the mother fainted.

After the service the girl walked around rejoicing in the healing that she had received. I asked her how her back had been broken and she said it had happened in an automobile accident about a year ago. Asking her how much walking she had done since the accident she replied that she had not been on her feet since the time of the accident until that night after Brother Branham pointed her out and told her to get up and claim her healing. (A Prophet Visits South Africa, pgs. 77 & 78)