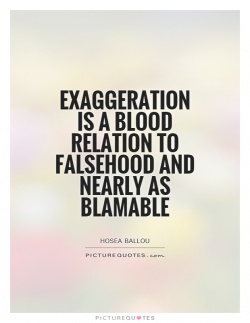 William Branham admitted that he was prone to exaggeration:

I'm not very good at making a…?… or estimating crowds, because I usually exaggerate on it.[1]

But just how bad was he went it came to exaggerating things?

Is there a higher standard under the new covenant?

The excuse we hear from message followers regarding William Branham's lack of credibility is as follows:

God used an Abraham (he lied), He used a Moses (he rebelled), a Jonah (he disobeyed), a Samson (he sinned), a David (he murdered). He also used a Joshua, and a Joseph. And those with severe blemishes far outnumber those whose histories seem to be perfect. ALL WERE, AND ARE HIS. None dare deny that. He used them by and through the Holy Spirit that He put within them. So why should we be surprised that William Branham also has faults?

But the examples are always references to people under the old covenant, never under the new. Is there a higher test under the new covenant or should we simply excuse William Branham's exaggerations and lies?

What is the test for Christian leaders?

Christians are not to be deceitful:

Therefore, rid yourselves of all malice and all deceit, hypocrisy, envy, and slander of every kind.[2]

“Whoever desires to love life and see good days, let him keep his tongue from evil and his lips from speaking deceit...[3]

The standard for those in leadership in the church is higher than for others:

Not many of you should become teachers, my brothers, for you know that we who teach will be judged with greater strictness.[4]

Now the overseer is to be above reproach...[5]

We are warned about those that do not speak honestly:

See to it that no one takes you captive by philosophy and empty deceit, according to human tradition, according to the elemental spirits of the world, and not according to Christ.[7]

We are from God; the person who knows God listens to us, but whoever is not from God does not listen to us. By this we know the Spirit of truth and the spirit of deceit.[8]

We believe it is clear from scripture that William Branham's lack of credibility is in direct contravention of the standards required of Christian leaders.

The following are some examples of William Branham's wild exaggerations:

Ministers walking to the platform 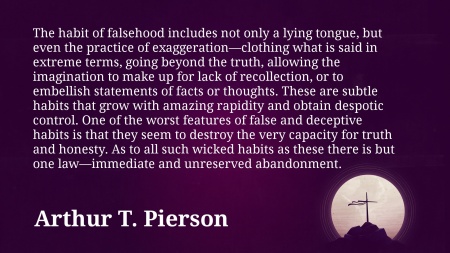 They was having a conference…he said, "I want all the preachers to come to the platform." And I guess there's three or four hundred preachers got on the platform.[11]

So that night I just waited to see what the would do. They had all the preachers come up on the platform. They said, "We're—we have…" About five hundred of us up there.[12]

Notice that on every telling, the number became larger. In the short space of less than 4 years, the numbers change from 150 to 500 (333% increase). Is that the formula that should be used to correct all his numbers?[13]

In 1933, William Branham tells of how he baptized a number of converts in the Ohio River after he had held a tent meeting. The Jeffersonville Evening News, June 2, 1933 states that, “Fourteen people were converted in a tent meeting conducted at Eighth and Pratt Streets by the Rev. William Branham.” Remember, William Branham stated that when he was at Mishawaka in September of 1934, he signed his name as “Baptist” as well as “Evangelist.” He said he had no church (building) but he went around holding tent meetings (mostly Pentecostal churches.)

William Branham's exaggerations are acknowledged by some in the message:

According to the witnesses at the baptismal service, the crowd was only a few hundred in size. The number being baptized is uncertain, but it was only a few. While baptizing one of the converts, a loud noise like a clap of thunder or a sonic boom occurred. It was so loud that it frightened the crowd and shocked some causing them to attempt to take cover. There were no other visible or audible signs.

This is quite different from Bro. Branham’s version of the story. Neither Doc Branham or Fannie Wilson reported hearing a voice. No one in the crowd saw a bright light descend. Additionally, the witnesses reported the crowds were not as big as Bro. Branham sometimes claimed.[14]

William Branham only indicated twice that he was prone to exaggeration:

So, immediately I went to Kingston. And they—they knowed Thursday afternoon that I’d be there Friday. That’s all the advertisement we had. I’m not very good at making…?…or estimating crowds, because I usually exaggerate on it. But the first night, I’d say we had about twelve, oh, about twelve hundred people, out, because it was just known one day. And the next day they started runners running four miles, on relay, up the mountains. One runner would run for four hours, and then let some other runner go on up the mountain. And the second night there was about five thousand. And the third night it was estimated around fifteen thousand, maybe twenty. And there were thousands times thousands came to the Lord.</ref>William Branham, 59-0301M - Strait Is The Gate, para. 25</ref>

In the newspaper it said that all the birds had flew away from their coves… In India, they don’t have nice fences like you have here in the States, woven wire, and so forth, and fine picket fences. They pick up the stones mostly, and lay the stones together. There’s four hundred and seventy million people in India. And honest (I know I’m exaggerating), but I’d guess four hundred million beggars. There’s just… They know nothing but beg. They got plenty of natural resources, but not the mentality to develop it. All they know is beg and religion.[15]