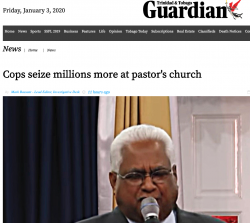 Vinworth A. Dayal is the pastor of Third Exodus Assembly, Depot Road, Longdenville, Trinidad & Tobago. As with most ministers in the message, Vin Dayal has had no formal theological training which is a badge of pride in message churches. In 2021, Pastor Dayal was charged with criminal money laundering.

For those not familiar with Third Exodus Assembly, the church would be considered a cult by virtually all Protestant, Roman Catholic or Orthodox churches.

Those that attend Third Exodus Assembly would describe themselves as following "The Message" of William Branham, although the proper term would be "Branhamites". The reason that most Christians would consider this church to be cultic and heretical in its teachings are as follows:

On December 9, 2019, the Central Bank of Trinidad and Tobago announced that all paper $100 dollar banknotes would cease to be legal tender as of December 31, 2019.

According to multiple newspaper articles including both the Trinidad Express and the Trinidad Guardian, Vin Dayal went to a branch of the State-run First Citizens Bank on December 23, 2109, and informed the bank that he intended to redeem all of the old paper $100 notes in his possession which amounted to TTD$28,046,500 (Trinidad & Tobago Dollars), which is equivalent to about USD$4,100,000 (US Dollars).

Because of the substantial amount, he was redirected to the Central Bank of Trinidad and Tobago (CBTT). Apparently CBTT representatives instructed him to visit the bank in person and fill out a source of funds declaration form prior to redemption of the notes in his possession.

According to Dayal’s lawyer, Darrell Allahar, the source of funds was churchgoers who contributed their tithes. He said Dayal “had collected over the past 19 years voluntary offerings for his personal use and benefit from members of the congregation of the church in the form of tithes”.

The funds were seized on December 31, 2019 by officers of the Finan­cial Investigations Branch (FIB) of the Police Service as Vin Dayal attmepted to exchange them. Additionaly, FIB officers, along with six uniformed, armed police officers, subsequently searched the residence of the Vin Dayal's children. We also understand that the church has also been subject to search and "millions more in cash" was seized.

It was reported that the funds were seized under the Proceeds of Crime Act.

Third Exodus Assembly pastor Vin Dayal, who is under investigation for the source of $28 million he tried to exchange for new $100 bills on Old Year's Day, has declared the devil is trying to “make him famous”, and with the support of heaven his church will not “scatter and fall apart.”

During a sermon on the evening of January 2, 2020 while FIB officers were busy counting money seized from the church, Vin Dayal reportedly stated:

Good to see all the troops out tonight, Satan trying to make me famous, Amen, but there is more in heaven friends, more with us than with them, there is more with us than with them by the grace of almighty God... You see that is what the devil has tried, the devil try to hit something and think we will scatter and fall apart but that word is planted in you. That’s when the going gets tough, the tough gets going... We not in some kind of jokey religion friends, this is an apostolic church with an apostolic faith, this is the bible church.[1]

On July 1, 2021, Vinworth Dayal was arrested by officers of the Financial Investigations Branch and the Inter-Agency Task Force. He was subsequently charged with two counts of money laundering.

The Trinidad and Tobago Police Service said 60-year-old Vinworth Anthony Dayal of Longdenville was charged with two counts of money laundering contrary to Section 45 (1) (b) of the Proceeds of Crime Act, Chapter 11:27, following advice received from Director of Public Prosecutions (DPP) on June 30.

The TTPS said the accused appeared before a Magistrate in the Port of Spain Court on July 1 where he was granted bail of $10 million TTD.

Vin Dayal was also ordered to surrender his passport.

The police indicated that they had launched an intensive investigation into the source and intended use of the sums of cash that had been seized earlier in the year in accordance with the Proceeds of Crime Act, Chapter 11:27.[2]

Eighteen witness statements were filed by the prosecution in the case involving La Romaine pastor Vinworth Dayal, who was slapped with two charges in July. The charges alleged that the $28 million-plus in $100 cotton bills that he tried to get exchanged at the Central Bank in 2019 were proceeds of criminal property.

Six more witness statements were to be filed and served by December 10.

Evidential objections are expected to be filed in January and Dayal will return to court in March 2022.

The charges against the pastor are that on December 31, 2019, he possessed criminal property in the amount of $28,028,600 in TT currency, which represented in whole, or in part, a pecuniary advantage to himself as a result of criminal conduct contrary to the Income Tax Act, knowing or having reasonable grounds to suspect that those proceeds were criminal property. The second charge alleges he was in possession of $2,691,338, on January 2, 2020.

Both charges were laid under Section 45(1)(b) of the Proceeds of Crime Act and were laid 18 months after he tried to exchange the money, which has since been held in an interest-bearing account.

Dayal was granted $10 million bail to cover the two charges.[3]

Why we should not be surprised

In message churches, pastors generally consider tithing paid into the church to be their personal property. As a result, it is not surprising that Vin Dayal took the tithe as being his and did with it as he saw fit.

This is the same issue that created the significant problem which William Branham had with the Internal Revenue Service (IRS) in 1956. The IRS charged Branham with tax evasion, which was eventually settled out of court by Branham accepting a penalty of USD$40,000.