The tribe of Dan and the Eagle 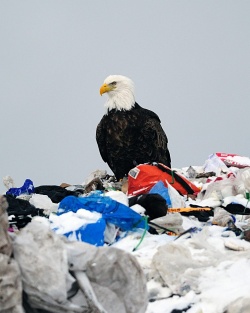 William Branham thought that there was a special significance to his ministry and eagles. More detail on his misunderstanding of the bible on this issue can be found in our article on The Prophet and The Eagle.

William Branham also stated that the standard of the tribe of Dan, according to scripture, was an eagle. But is this true?

In Numbers 2 we read:

The Israelites are to camp around the tent of meeting some distance from it, each of them under their standard and holding the banners of their family.”

...On the north will be the divisions of the camp of Dan under their standard. The leader of the people of Dan is Ahiezer son of Ammishaddai.  His division numbers 62,700. The tribe of Asher will camp next to them. The leader of the people of Asher is Pagiel son of Okran. 28 His division numbers 41,500. All the men assigned to the camp of Dan number 157,600. They will set out last, under their standards.

In the book of Genesis, there is a reference to an animal that Dan will be like:

“Dan will govern his people, like any other tribe in Israel. Dan will be a snake beside the road, a poisonous viper along the path that bites the horse’s hooves so its rider is thrown off. I trust in you for salvation, O LORD!"[2]

Nowhere in the Bible does it refer to what the standard of Dan was. The only reference to an animal with respect to Dan is a snake. Of course, William Branham didn't use that becauase it did not work with this eagle type.

One of them was Reuben, he always camped to the—the south. He was the head of man. And Ephraim was to the west, with three tribes, he was the—the ox. The…Then on the east was Judah, which is the lion. And on the north was Dan, which was the eagle. Now, notice. You remember them? All of you remember them well, how we had them drawed out: the eagle, and the ox, and the—the man, and the lion. [4]