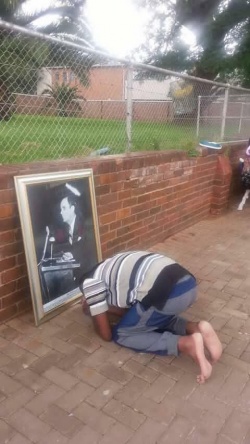 The Bible often speaks against Idolatry. In today’s modern culture, especially within Western Civilization, we don't see many graven images or literal idols made of wood and stone to which the masses bow. Yet, idolatry is just as alive and well today as it has ever been, even among the more advanced societies. In reality, an idol is anything upon which we base our self-worth or value or to which we devote ourselves without question or restraint.

Idolatry in the message

Let’s dig a little deeper into the beliefs of the message. The message condemns the concept of a Pope, but has elevated William Branham as not only the most powerful prophet of all time, but also the sole and final authority upon which scripture is interpreted. In fact, the message claims that there is no one within our day that will make the rapture without accepting the message of William Branham.

The message has turned “truth” into an idol. It says that we are saved because we have and believe the “only truth” that is within the realms of Christianity today and rests salvation upon that rather than upon the simple Gospel of the shed blood of Christ. The message is vindicated, not by its adherence to scripture, but because of signs and wonders of the “prophet,” which in turn grant him “Thus Saith the Lord” with respect to interpretation of scriptures. How does this line up with Matthew 24:24, 2 Thessalonians 2:9, 1 John 4:1, and others?

Many within the message anchor upon the holiness standards of dresses and uncut hair for women. Sure, they will tell you that they are not saved by those things, but in looking a little deeper, they rest upon the merit achieved by their sacrifice for the “truth.” I heard a well-known message minister say that he didn’t think much of death bed confessions, nor of the 11th hour workers parable, saying “how is it fair for them to get the same reward as us who have sacrificed all these years for the sake of the truth?” Friends, that line of thinking is contrary to the Gospel of Jesus Christ.

What about the idol of popular ministries? How many message ministers today ignore the mountain of factual problems with the message, both in biblical doctrine and grossly inconsistent or non-factual claims by William Branham, because they are unwilling to give up their status within the message? They do this, while simultaneously condemning denominational ministers for selling out for a meal ticket. How many message believers anchor their assurance in unquestioning obedience to their pastor or to the words of William Branham? The message is comfortable to them, and for many, it is all they have ever known. Many ministers rest their assurance upon the emotional power of the meetings and outward conformities of their converts, never stopping to evaluate whether or not the fundamental precepts of the message are consistent with documented facts or the Gospel of Jesus Christ based upon sound exegesis of scripture.

In Acts Chapter 19, Paul challenged the idols of Ephesus. This challenge was made at the very heart of the culture of that society. With great zeal and violence the people of Ephesus fought against those who challenged their idols. We see the same response today when the idols of the message are challenged. Stop and ask yourself, how much of the message ideology that is preached today is in reality folklore that has been made into idols?

The antidote to idolatry

The false teachers that Paul refers to in the Book of Galatians were not encouraging the Gentile Christians to ignore God’s law, as they had in their pagan days. Rather, they were urging them to adopt all the Old Testament Mosaic law, in order to be justified and pleasing to God (Gal 2:14–16).

Therefore, Paul is saying that earning one’s own salvation through scrupulous biblical morality and religion is just as much enslavement to idols as outright paganism and all its immoral practices! In the end, the religious person is as lost and enslaved as the irreligious person. Why? Both are trying to be their own savior and lord, but in different ways.

The basic principle of the world is that we need to save ourselves. We will worship what we think we need to fulfill ourselves, to give us “life”. And Paul is saying that any basic “thing”—money, sex, mountains and so on—can be worshiped, treated as a god, and become the basis of your religion. And whatever it is that we worship, we will be enslaved by.

For example, if we put our greatest hope in gaining wealth, we will be controlled and enslaved. We will be completely under the power of money. If we are not doing well at gaining it, we will be devastated. And even if we do get “enough”, we will be disappointed, and seek more. If we treat things that are not gods as though they are, we become slaves to them spiritually.

Christians who are no longer sure that God loves and accepts them in Jesus, apart from their present spiritual achievements, are subconsciously radically insecure persons, much less secure than non-Christians, because of the constant bulletins they receive from their Christian environment about the holiness of God and the righteousness they are supposed to have. Their insecurity shows itself in pride, a fierce defensive assertion of their own righteousness and defensive criticism of others. They cling desperately to legal, pharisaical righteousness, but envy, jealousy and other sin grow out of their fundamental insecurity.[1]

Our insecurity regarding our acceptance with God is the reason we make idols. We look at our knowing of Him (which fluctuates so much) instead of His knowing of us in Christ. We are desperately trying to firm up a positive self-image by using our idols. Paul reminds us that the gospel shows us we don’t need to make ourselves beautiful or lovable to God; He already knows us. If this is the case, we don’t need to make an idol out of other people’s approval or even our own self-approval.[2]