Examination of the Seventh Seal

There is debate by followers of William Branham on whether he actually had the revelation of the seventh seal. He did preach a sermon on the subject, but at the time he claimed the interpretation of the seal was not divinely revealed to him. Interestingly, what he did say on the seventh seal was also copied from the writing of Charles Taze Russel.

Branham’s essential interpretation of the seventh seal was that its mystery was contained in the seven thunders and that it would be revealed through the angel of Revelation 10:7:

I’m only telling you what I seen and what has been told to me. And now you—you do whatever you want to. I don’t know who is going to…what’s going to take place. I do not know. I just know that those Seven Thunders holds that mystery. The Heavens was quiet. Everybody understand?

But we are promised, in the last day, that to return to the Church again, for the benefit of straightening up all that has been misled, missed, undone, left undone. For, it’s predicted here that the seventh angel’s Message would finish the mysteries of God.[1]

It appears that William Branham was setting up the future revelation of the seventh seal and the seven thunders following the exact same pattern used by Charles Taze Russel.

Compare William Branham’s statements to Charles Taze Russel to see for yourself:

Had opened the seventh seal.—“The seal of the living God.” (Rev. 7:2.) The opening of the seventh seal is _progressive_. The opening and unfolding of the Truth goes on as the saints are sealed. By the time the saints are all sealed in their hearts and minds with the Present Truth, the deepest features of the Truth itself will have been disclosed. “The time will undoubtedly come in the near future when the number of the Elect will be complete. Then only such vacancies as might still occur by some falling out would remain.” (Z. ’14‐68.) “God’s people down through this Gospel age have been privileged to know something of the ‘Secret of the Lord’—the Divine Plan. But not until the last seal is broken, does the scroll fly wide open, permitting the ‘Mystery of God’ to be fully disclosed; as it is written: ‘In the days of the voice of the seventh angel, when he shall begin to sound, the Mystery of God should be finished, as He hath declared to His servants the Prophets.’ (Rev. 5:1; 10:7.)”—Z. ’97‐257.

10:4. And [when] WHATSOEVER the seven thunders had uttered [their voices], I.—Pastor Russell as a representative of the John class.

Charles Taze Russel went on to explain that a series of seven subjects he published between 1880 and 1910 were the seven thunders that fully revealed the mystery of God, which completed the unrolling of the seventh seal.

In addition to following the basic thought that was brought by Charles Tax Russell, William Branham also added in some of the teaching of Clarence Larkin. Here is a comparison of what William Branham said to direct quotes from Larkin's The Book of Revelation: A Study of the Last Prophetic Book of Holy Scripture, published in 1919:

Conclusion re the Seventh Seal

It seems that William Branham was attempting to follow Russell’s pattern with some of the messages he was preaching in the last two years of his life, pointing to them as fulfillment of the mysteries. Just as Russel equated the angel of Rev. 10:7 to the messenger of Rev. 3:14, so did William Branham:

I believe, that the full revelation through the age of Luther, Wesley, and John Smith, Alexander Campbell, and different ones that’s preached on the Bible, and then we got over in the Bible and showed that there would be a—a seventh angel’s Message. And at the sounding of the seventh angel’s Message, all the mysteries of God would be made known. Then come seven mysterious thunders.[6]

The seven mysteries, sevenfold mystery of the Bible, that’s been closed up since the foundation of the world, will be revealed. And we, yet a humble little group, compared with all the world, we’ve enjoyed these blessings, a hearing those mysteries. Marriage, divorce, serpent’s seed, all these different questions, has been completely revealed to us, not by man, but by God, Himself, that’s opened those seven mysteries.[8]

Final Conclusion with respect to the Seven Seals

Now I want to make this real clear. Every time, every time that these Seals has come to the place; everything that I ever believed on Them, and has read of other people, has been contrary to what come to me in the room.[9]

If other ministers had an essentially correct interpretation of the seals before William Branham was even born, how can we say the seals were opened through his ministry?

Silence! The Seventh Seal is the Third Pull

The seventh seal in the Bible is a half-hour of silence. In contrast, William Branham talked for two hours about it, yet tried to avoid saying what it actually was.

“This seventh seal is the end of time, of all things…if Satan should get a hold of it, he might do great damage.”
"It’s the Third Pull. …you remember, when he took me up there, and said, “This is the Third Pull, and no one will know It. …Visions never fail. They are perfectly the Truth.”

Click here to learn more about the Third Pull.

Cut the Tape. With scissors.

William Branham actually felt that he had said too much during the sermon, so he went back and edited the sermon. To do this, he cut the tape, recorded a new ending, and taped that new ending in.

Thankfully, Voice of God Recordings released both endings after his death, so we know that the revised version omitted the story of "The Kings Sword" in Sabino Canyon, and a statement that the pillar of fire whirled toward a tent ministry.

“And just then a Voice shook down through there, that rocked the rocks. Said, “it’s the Sword of the King! …Something hit, and said, “Don’t fear. This is that Third Pull. …And I seen that Light…and it whirled away from me, like that, and went over that tent. And said, “I’ll meet you in there.” And said, “This will be the Third Pull, and you won’t tell It to nobody. …that’s the reason all heaven was silent. …I just feel checked, not to say no more about it. …We’re at the end time, the opening of the Seventh Seal. ”

The Sword that William Branham said he received was “The King’s Sword”.

The pillar of light that went to the tent referred to the coming fulfillment of the Tent Vision, which was the final scene in his vision of the Third Pull. William Branham talked about having a tent meeting near the end of his life, but this never happened.

William Branham does what Jesus would not do...

“Jesus never mentioned it…John couldn’t write of it …I’m going to tell you my revelation of it…Jesus said…He didn’t know it, Himself. Said, ‘Only God’ would know it.”

During this sermon, William Branham also paralleled himself to an Angel, and possibly even God.

“Remember, the seventh Messenger was…the noted One to me, the seventh Angel. It seemed more to me than any.”
“When the supernatural comes in, that’s the mind of Christ.”
“There is only one person could fulfill that, only one Spirit that’s ever been on the earth, that I know of. Would either be…it would have to be Elijah, in his time. And it was predicted that it would be, which is nothing but the Spirit of Christ.”

...And gets a Cult Following

William Branham’s statements from this and following sermons have been used by the “Christ Branham” movement and Fred Sothmann to say that William Branham was greater than Jesus Christ. Using the logic that since only God the Father knows the contents of this Seal (remember that even Jesus did not know the hour or day) then William Branham must be God the Father because he alone knew the contents of the Seventh Seal, even though he didn't say what it was. You would think that theses doctrines would have ended with William Branham's death in December 1965, or his burial in April 1966...but they did not.

Fred Sothmann was one of the two men who hunted with William Branham on Rattlesnake Mesa (Sunset Mountain) when he said he received his commission to preach the Seals. Fred was called upon during the Seventh Seal to “Amen” as a witness.

The "Christ Branham movement" also ignores the closing statements by William Branham that he did not know what the seventh seal actually was. So he closed this sermon without revealing the seventh seal. Still, like a great storyteller, he left the congregation anticipating a sequel:

“Now what this great secret is that lays beneath this Seal, I do not know. I don’t know it. I couldn’t make it out…but I know it was them Seven Thunders.”
“This Seventh Seal, It is still a notable thing…we don’t know what It is, as yet, because It’s not permitted to be broken. …according to the Word of God, and the vision, and the revelation, the interpretation thereof is THUS SAITH THE LORD.”

It was during this time that Anna Schrader and Kenneth Hagin prophesied William Branham’s impending death by the end of 1965, for “Walking in the way of Dowie.”

Was the Seventh Seal Ever Revealed?

William Branham taught that The Seventh Angel is on the Earth at Christ's Coming. This means that if his ministry is true, the Seventh Seal would have had to have been opened before his death, and that time should currently be no more (check your clock to see if time has ended).

On July 28, 1963 in a sermon called “Christ is the Mystery of God Revealed”, William Branham stated that the Seventh-Seal-Coming of the Lord had not been revealed yet:

’’ And that's the reason there was silence in Heaven for a space of a half hour, and seven thunders utter their voices, and John was even forbidden to write it, see, the Coming of the Lord. That's one thing He hasn't revealed yet, of how He will come, and when He will come. It's a good thing that He doesn't. No.”

William Branham confirmed this when he released the Church Ages Book in 1965.

”He will reveal the mysteries of the seven thuders in Revelation 10 which are the revelations contained in the seven seals. It will be these Divinely revealed 'mystery-truths' that literally turn the hearts of the children to the Pentecostal fathers. Exactly so.”

So his ministry ended in circular statements that: 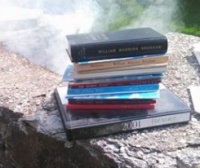 A number of them who had been practicing sorcery brought their incantation books and burned them at a public bonfire. The value of the books was several million dollars. (Acts 19:19 NLT)

William Braham said the Third Pull was many things, most of which relate to stories or events that occurred before he preached the Seals (like Hattie Wright and the squirrels).

After the Seals, he said the following about the Third Pull:

What did William Branham say was the vindication of his ministry? It was his own private interpretation of scripture.

"People let man put their own interpretation to It by theology, and will not believe God's Divine vindication of It (that's, God's interpretation);" (December 6, 1965)
"The First Pull, healing; Second Pull, prophesying; Third Pull, the opening of the Word, the mysteries revealed. …the Third Pull was the opening of them Seven Seals… What's happened upon Mount Sunset? God confirming His Word…And there shall rise false prophets.” (July 25, 1965)