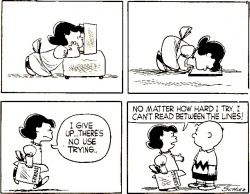 Throughout William Branham's ministry, he taught that, in order to understand the Bible, you had to read between the lines. The problem is that this leads to extra-biblical (i.e. non-biblical) revelation.

For we write none other things unto you, than what ye read or acknowledge; and I trust ye shall acknowledge even to the end; As also ye have acknowledged us in part... (KJV)
Our letters have been straightforward, and there is nothing written between the lines and nothing you can’t understand. I hope someday you will fully understand us, even if you don’t understand us now. (NLT)
For we do not write you anything other than what you can read and also understand. But I hope that you will understand completely just as also you have partly understood us... (NET)

Paul is saying here that the Bible is not written to say one thing when something else is really meant. Paul’s integrity and the integrity of the Bible as a whole is based on God always letting people know exactly where He stands on all matters.

In that hour Jesus rejoiced in spirit, and said, I thank thee, O Father, Lord of heaven and earth, that thou hast hid these things from the wise and prudent, and hast revealed them unto babes: even so, Father; for so it seemed good in thy sight.
At that, Jesus rejoiced, exuberant in the Holy Spirit. “I thank you, Father, Master of heaven and earth, that you hid these things from the know-it-alls and showed them to these innocent newcomers. (The Message)

For it is written, “I will destroy the wisdom of the wise, and I will thwart the cleverness of the intelligent.

We don't need to add anything to the Bible by "reading between the lines". The truth of the Gospel is there for the simplest person to see.

You know, if you read the Word right like this here, it's all right, but you sure miss the meanings of It. The Word is written between the lines. Jesus said, "I've hid It from the eyes of the wise and prudent and revealed It to babes such as will learn." These theological seminaries are just like them priests was back there, and the high priest, and all of them that read the Word but failed to see Jesus being the Christ. See what I mean?[1]

Now, this is between the lines, friends. That's the reason they re--failed to recognize Jesus Christ when He come. They'd read the Scriptures about it, but they failed to recognize Him. And it's the same thing today; we got our own ritualistic routine. Anything out of that, we don't believe it. Fundamental as we can be, but God comes right in between the lines sometimes. We fail to see it. Now, He was contacting her spirit.[3]

Now here, when I go overseas, my wife will write me a letter, and she'll say, "Dear Billy, I'm with... here... I just put the children to bed..." and she'll write me a letter. Now, I can read what she says there. Yeah, anybody could read that. But you know, I love her so much, I can read between the lines. I know what she's saying in between the lines. Well, that's the way God does His Bible.
Now, the students can argue the Greek words, but the believer reads between the lines. Amen. It's revealed by the Holy Spirit. Hallelujah. God writing His letter to His children, reading between the lines...
If I had time here, I'd just like to show you through the Bible. But watch how this is, this little instant. Now, to make it true to you... About five years ago, I preached on this over here at a place, and a man wrote a book on it, put it on the radio, reading between the lines.[4]

Now, listen. This Man setting there, He said, "Abraham, where is your wife, Sarah?" A stranger, how did He know she was married--he was married? How did He know that his wife's name was Sarah? Watch that Angel, what message He gave.

Abraham said, "She's in the tent behind You (And the Bible said that the Angel had His back turned to the tent.) --behind You." Said, "Where is Sarah, your wife?" How did He know that he had a wife, and how'd He know her name was Sarah? Watch the nature of that Spirit now to the elected church.

The Gospel is wrote between the lines as the same as on the lines. He's hid it from the eyes of the wise and prudent, and revealed to babes such as will learn. Jesus thanked God for it. So do I. Don't take the seminary experience; you take the kneeology experience to know God. And...[5]

Look. What do we do? I love her; she loves me. We just get down and pray and I ask God to help her, and she asks God to help me, I kiss her good-bye and go overseas. That settles it. She don't have to worry about me. I love her too much. I don't worry about her; she loves me too much. As long as we love one another that way, we'll be all right. And you've got to love God. She'll write me a letter, and she'll say, "Dear Billy, I just put the children to bed. And Sarah today did so-and-so. And Rebekah, all like this, and just..." See? She's saying that on the paper, but I love her so much, I can read between the lines. I know what she's talking about. See? I love her.
That's the way you've got be with God. You've got to love God. Then you can read between the lines and see what He means. He's hid it from the eyes of the smart seminary students and revealed it to babes such as will learn. That's what He said. Jesus thanked God for doing it. Now, doesn't take education; it takes a surrendered life.[6]

Now, reading the Bible, It's a love Story that God wrote to His Church. It's God. God is love. Do you believe that? And the Bible is written so that the educated and smart can never understand It. You have to be in love with God to understand It. You have to have God in you. He interprets Himself to you.
Now, it's just like I got a wife. Oh, how I love her. I love her with all my heart. And I'll be overseas somewhere and she'll... After she gets the kiddies to sleep, she'll write me a letter, and say, "Dear Billy, I'm setting here tonight, I'm thinking of you. I'm writing." See, I know what she's writing on the paper. But I know her and love her so much till I just know her nature; I know what she means, so I can read between the lines. See?
And God wants His Church to read between the lines, not read anything out of It now You have to read between the lines to see what It's meaning. Now, watch and see, find out if It doesn't.[7]

Oh, brother, the Bible is just like a love letter. You have to read between the lines, see what It means. God said, "He hid it from the eyes of the wise and prudent, and revealed It to babes such as would learn."
When I'm out in the missions, my wife writes me a letter. And I love her, and she loves me. And she say, "Dear Bill, tonight I just put the children to bed. I've worked today." I see what she is reading, what she is writing. But, see, I so love her, I can read right between the lines. I know what she's talking about. She don't have to tell me. I know, 'cause I can read between the lines.
That's the way it is with God, when not trying to study from some newspaper standpoint, some theological standpoint. But fall in love with Him, get down and really get Him in your heart, "the love of God shed abroad in their heart by the Holy Ghost," then go to reading the Bible and you'll see It coming right out between the lines. See, you know what He is saying. He never said that right out in the Word. Jesus thanked the Father because that He had "hid those things from the eyes of the wise and prudent." Now, no one else could read my wife's letters like that, 'cause I love her that way, see, and that's the way she writes to me. That's the way God writes to you. It's between the lines, you read It.Cite error: Closing </ref> missing for <ref> tag

Now, I know that kind of chokes you a little bit now. But, remember, just so that you'll be sure to know now... You don't read the Bible like this; you read between the lines and see, make the picture come.[8]