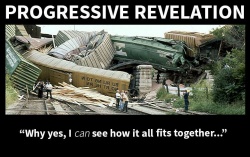 Progressive Revelation is a doctrine to which most followers of William Branham adhere. Its basic premise is that William Branham grew in revelation, and so quotes from later sermons are:

This doctrine is a necessary reaction to the fact that William Branham contradicted himself on a number of issues in his recorded sermons. For example, without this doctrine Message Believers could not reconcile these two statements of William Branham:

If you take this doctrine to its ultimate and logical conclusion, then the last thing that William Branham said on any subject is the correct interpretation of that issue.

Arguably the most blatent evidence of this doctrine in action is Rev. Gerald Lush's re-written version of "A Man Sent From God" originally written by Gordon Lindsay. Evidence of this is as published on the williambranhamhomepage.org website:

This chapter in the book "A Man Sent From God", which was written by Bro. F.F. Bosworth, has been omitted and replaced with "More Than Spiritual Gifts" by Bro. Gerald A. Lush. The purpose was to "update" the material in the "Light" of the Mystery of God which has been revealed in this Age through his Servant and Prophet, Bro. William Branham.

Much of what Bro. Bosworth wrote has been incorporated into the new chapter. In updating the material absolutely no disrespect is intended. The publishers of this Web Site greatly respect and honor the memory of our Bro. Bosworth. But we felt it necessary to "update" some of the information in light of the fact that Bro. Bosworth did not live to see all that God did through Brother Branham.

In the "progressive unfolding" of that ministry we have come to understand, through Bible prophecy, the significance of a Ministry that included more than Spiritual gifts..."

The problem with this doctrine is that it is also applied to visions, prophecies and other non-doctrinal statements. The result is revisionary history, as opposed to seeking the "original seed" of truth in historical documents.

Message preachers choose to ignore the written tract for the audio sermon as the facts don't otherwise reconcile, and as the 1946 retelling fits better with the doctrine that Bro. Branham's commission dovetailed with Israel becoming a nation (even though that happened in 1948).

I wrote a little one, one time, and it was called "Jesus Christ the Save Yesterday, Today, and Forever." And I wrote another one called "The Heavenly Vision". Oh, they're little bittly things, so, about sixty, seventy pages in them, I think, and sold for about fifteen cents or something. And it had to be rewritten a dozen times for..for the grammar's sake of it." (Redeemer & Redemption, November 19, 1955).

Is this doctrine scriptural?

While God's disclosure of Himself was a progression from the Old Testament era to the New Testament, nowhere in scripture does God correct Himself or change His mind. Even William Branham agrees with that - You say, "God changes His mind." He doesn't change His mind! (Modern Events are made clear by Prophecy, December 6, 1965)

So is the "message" doctrine of progressive revelation correct?

William Branham was a man and, therefore, made mistakes. But doesn't that mean that his last opinion on a subject could have been as much a mistake as his first opinion? Is there any scriptural support for this doctrine?

How could one individual be wrong his whole life and then be instantly correct on everything he said just before he died?

Does this "doctrine" apply to anyone else in the Bible?

One would think that if this applied to William Branham, it would also apply to other prophets in the Bible or at least have been referred to in the Biblical literature.

For example, why don't we put less emphasis on the early writings of Paul (such as 1 Thessalonians and Philippians) and more on the later ones (such as 2 Timothy and Titus)?

The fact is that we don't have any incorrect doctrine in the Bible and this would seem, by this one fact alone, to exclude William Branham from being a prophet (in the sense used by message believers).