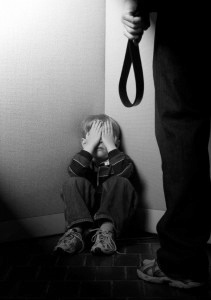 People, and particularly preachers, in the message often state something similar to this:

First of all, know that I love you. I do not hate you. You are not my enemy... But true love is corrective.[1]

This is used as an excuse for message followers to say terrible things in a way that appears to be filled with hatred. This attitude comes directly from the teachings of William Branham (see quotes below).

But is this Biblical?

The New Testament does refer to this concept but it is interesting to note that it is always God that is the one who disciplines his children:

But when we are judged by the Lord, we are disciplined so that we may not be condemned along with the world.[2]

Endure what you suffer as being a father’s punishment; your suffering shows that God is treating you as his children. Was there ever a child who was not punished by his father? 8If you are not punished, as all his children are, it means you are not real children, but bastards. In the case of our human fathers, they punished us and we respected them. How much more, then, should we submit to our spiritual Father and live! Our human fathers punished us for a short time, as it seemed right to them; but God does it for our own good, so that we may share his holiness.American Bible Society, The Holy Bible: The Good News Translation, 2nd ed. (New York: American Bible Society, 1992), Heb 12:7–10.[3]

Those whom I love, I reprove and discipline, so be zealous and repent.[4]

The scripture clearly teaches that God can and will correct us, but does this give permission for people to correct each other in ways that can best be described as "extremely confrontational".

No! God describes his discipline as coming out of the relationship that a father has for his children.

Any parent knows the intense displeasure and irritation that comes from another adult trying to discipline their children. It is completely inappropriate for me to apply "corrective love" to God's children. And like a human parent, he would take extreme displeasure when someone tries to discipline his children, particularly when they do it in a way that is anything but loving.

Try this next time you are in the local mall. Go up to a child that is acting like a brat, and give him a good paddle on his behind. Do you think his parents will turn to the little urchin and say:

“You see what happens when you act this way in public? Strangers spank you.”[5]

I don't think so.

First, if you have a doctrinal disagreement with someone, which is what 99.9% of message people will beat you up for, there are no Biblical grounds for going on a rant against a fellow Christian.

The Bible does say this in respect of "church discipline":

If your brother sins against you, go and tell him his fault, between you and him alone. If he listens to you, you have gained your brother. 16 But if he does not listen, take one or two others along with you, that every charge may be established by the evidence of two or three witnesses. 17 If he refuses to listen to them, tell it to the church. And if he refuses to listen even to the church, let him be to you as a Gentile and a tax collector.

...Then Peter came up and said to him, “Lord, how often will my brother sin against me, and I forgive him? As many as seven times?” 22 Jesus said to him, “I do not say to you seven times, but seventy-seven times.[6]

When discipline is done in love, the primary focus is not on correction but on restoration. That is why Paul says this about the attributes of love:

If I speak God’s Word with power, revealing all his mysteries and making everything plain as day, and if I have faith that says to a mountain, “Jump,” and it jumps, but I don’t love, I’m nothing...

Love never gives up.
Love cares more for others than for self.
Love doesn’t want what it doesn’t have.
Love doesn’t strut,
Doesn’t have a swelled head,
Doesn’t force itself on others,
Isn’t always “me first,”
Doesn’t fly off the handle,
Doesn’t keep score of the sins of others,
Doesn’t revel when others grovel,
Takes pleasure in the flowering of truth,
Puts up with anything,
Trusts God always,
Always looks for the best,
Never looks back,
But keeps going to the end.

...But for right now, until that completeness, we have three things to do to lead us toward that consummation: Trust steadily in God, hope unswervingly, love extravagantly. And the best of the three is love.[7]

Paul says that we are through love to serve one another.[8]

Another example from the message

Not long ago I had a longe discussion with a message person regarding discrepancies in the message. When we parted he said he "loved me as a brother". I said, "get real pal, we just met and you said I blasphemed the Holy Spirit, which means I just cut myself off from God's salvation for ever! Don't be such a hypocrite. Be real!"

Someone said to me, long, not long ago, "You condemned those Pentecostal people so much, why do you stay with them?" I love them. That's the reason. Love is corrective. If it doesn't… What if a junior stands out here in the street, and—and he's out there making a mud pile in the middle of the street, where them cars are passing by? You say, "Junior, bless your little heart, honey. You shouldn't be setting out there. When you get ready, come in." That's not love. You don't love your child. And you'd take him out there, and jerk him out of that street. And get you a stick and teach him he shouldn't go out there again, if you really love him.[9]

Thank you, people, this hot night, setting here. I trust that there'll not be one of you lost, at that Day. I—I—I trust that you and I, together, will find grace before God, that I'll be able to always stand for that which is Truth, never to hurt you, but never to pull a punch from you. See? If I would, I wouldn't be the right kind of a daddy, if I let my kid just do anything. I'll correct them. Any love will do that. Love is corrective. I remember you writing me that note, that day, Pat. I've still got it. And love is corrective. The Bible said so. And if it isn't correct… That's the reason God corrects us. He loves us.[10]

Love is corrective. If love doesn't correct, then it's not love. You see your child down on the street, and don't give him a little bit of posterior protoplasm stimulation, you—you're not a good dad. But a real mother or dad will turn him up and spank him, let him know he's got to get out of the street, or perish. That's genuine love. But to say, "Junior, dear, I don't know. You, maybe you shouldn't be out there at this time of day, the end time, when the cars are going pretty fast." Oh, nonsense, you sissified preacher, not the audacity to take God's Word and call white white and black black, right right and wrong wrong. But they do it.[11]

You say, "What do you scold them for?" Genuine love is corrective. If your child is sitting out on the street; you say, "Well, there sits Junior. He oughtn't to do that, but I don't want to hurt his little feelings." You don't love him. He'll get killed there. If you love him, you'll bring him in and give him a spanking. You'll make him obey. That's the way God does. Love is corrective, and that's genuine love. When a preacher stand and lets you women bob your hair, and wear paint and stuff, and don't correct you, there is no genuine love there; and won't call it out. And let you man marry three or four times, and all of these other things, and get by with it, there is no genuine love there. Let you join a church, and pat you on the back, and smother you with some creed, saying, "That's all you have to do, is join the holy church," there is no love there. Or, either, the man is so totally lost, himself, he don't see. Genuine love is corrective, and brings you back to the Word of God.[12]

And now I have a Message that I'm responsible for. And many times I've been considered, amongst the people, well, maybe someone who just didn't sit down and think a minute, that I was a—a, oh, an awful person, I didn't like people, and I was always cutting them. And that's not so. That isn't so. I love people. But, you know, love is corrective. If your little boy was sitting in the street out there, and you said, "Junior, dear, I don't want you out there, but…" And cars buzzing by him, and you brought him in. He run back out again. Why, you should correct him. If you love him, you will. You have to. 24 If you seen a man floating down a river, towards a falls, in a little boat, that you knowed that boat was going to sink when he hit the falls, would you say, "John, you, maybe you ought to think a while, maybe you might not make it"? If I know he's not going to make it, I'm going to almost jerk him out of the boat, if I can, because it's love that does that.[13]