Joseph Coleman and the Seven Thunders 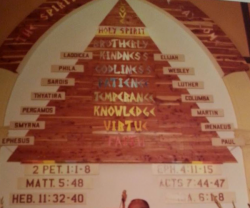 Joseph C. Coleman (06/27/1927 - 01/05/2012) was ordained at the Branham Tabernacle on July 7, 1963. He is best known for being the founder of the "Seven Thunders" sub-cult within the message (also referred to by his followers as the "Seven Thunders Inspiration" or simply the "Inspiration"). He was the pastor of the Local Christian Assembly Church on 70th Avenue in Forest Hills, New York (Queens) for over 45 years.

Joe Coleman was revered by his followers as an apostle.

Nathaniel Gueco is now the senior pastor of the Local Christian Assembly Church in New York City. however, it is generally acknowledged that leadership of the movement now resides in Kevin Blewett and David Musgrove.

Joseph Coleman taught that William Branham was a prophet but that he was the true "Echo" of the prophet. He was the only follower who could correctly interpret William Branham's message. In 1974, Coleman claimed to have received the revelation of the Seven Thunders from an angel. This created separation from other followers of the message. Coleman told his followers that they were special, the cream of the crop, who had been chosen to receive this revelation, which Coleman also referred to as the "Inspiration."

Coleman's followers revered him as the perfect man, as someone whose love for others was Christ-like. However, like other cult leaders, he controlled his followers with fear. He was known to humiliate his followers by telling of their sins from the pulpit. Those who questioned him were forced to publicly apologize. Defectors were banned - even family members were not allowed to associate with them.

After Coleman suffered a stroke while preaching in 2000, Jesse Robledo, Coleman's son-in-law and associate pastor, became responsible for leading the church. But he fell out with Coleman and was ex-communicated.

According to the FBI, in 2005, five leaders in the church (Joseph Jonathan Coleman (Joseph Coleman's son), Isaac Ovid, Aaron Riddle, Timothy Smith, and Robert Riddle) created Jadis Capital, which, in turn, started two hedge funds, the Logos Multi-Strategy I, LP, and the Donum Fund, LP, in February 2005 and August 2005, respectively. These five individuals marketed the funds to prospective investors, including members of Coleman's church, and collected approximately $9.3 million in investments in the Logos Fund and approximately $3 million in investments in the Donum Fund. [1]

In early 2010, each of the five individuals pleaded guilty to a charge of conspiracy to commit securities fraud.[2]

According to news reports, instead of using the raised capital to support the funds, the five co-conspirators used it to purchase lavish gifts, pay the inflated operating and payroll costs of the company and to satisfy debts incurred by Ovid prior to starting Jadis. The gifts included expensive foreign travel, jewelry, clothing, meals and luxury cars, including a $200,000 Bentley.[3]. Coleman's son was released from prison September 28, 2012.

In 2010, a young man from Montreal, Quebec, contacted Coleman about a vision that foretold Coleman being healed. Throughout 2011, the young man told how Coleman would be healed and transformed into a 21-year-old. During the process, Coleman refused medical treatment. Finally, in late 2011, Coleman was taken to the hospital where he died in January 2012.

Joseph Coleman focused on the meaning of the seven thunders of Revelation 10:

Then I saw another mighty angel coming down from heaven. He was robed in a cloud, with a rainbow above his head; his face was like the sun, and his legs were like fiery pillars.  He was holding a little scroll, which lay open in his hand. He planted his right foot on the sea and his left foot on the land, and he gave a loud shout like the roar of a lion. When he shouted, the voices of the seven thunders spoke. 4 And when the seven thunders spoke, I was about to write; but I heard a voice from heaven say, “Seal up what the seven thunders have said and do not write it down.”

William Branham believed that he was the fulfillment of Revelation 10:7.

Joseph Coleman appeared to have taught that the seven thunders were the virtues of 2 Peter 1:5-7:

It is amazing the amount of dissention that his teaching on the seven thunders caused. People left churches over it and churches that followed Coleman broke fellowship with the churches that didn't see Coleman's "revelation" on the subject.

The 7 Thunders are the 7 Voices of the 7 Church Ages which are 7 Manifestations of the Holy Spirit into the church as:

7 Voices to build the Perfect Church to be capped off with the Capstone. He builds His individuals the same way.

These Voices shook the kingdom of the devil in each age. It”s the Lived Voice that is the Thunder that shakes the devil's kingdom.

Bride: Each age Bride lived the Word Voice Virtue for her age.

Mal 4 restored back to the church 7 Voices for the Bride to live and manifest Brotherly Kindness as her Virtue of her age.

The 7 Earthly Angels spoke on earth The Word Bride Body on earth utters 7 Thunders (voices) With the Word opened......

The 7th Angel goes forth after the 7 Seals open with the 7 last Mysteries Thunders Voice Of God to restore back The Faith to the remnant.

The 7th Angel brings back these 7 Manifestations with a message to the last day Bride.

She receives the Word Message as the 7 Part Voice Of God. It wakes her up. Revival for her

The 7 Voices thundered out in the Bride 7 Steps added back because she’s one with the Original Voice, Then the 7 Voices go forth as One Voice Of The Resurrection.

Each (Word Virtue) lived as the Voice Of God for it’s day and age The Bride Tree fully restored shall live again with all 7 Manifestations of the Holy Spirit in her, with signs - wonders - miracles.

The Word (7 Parts) is now born into manifestation in your midst, allowing the Spirit to confirm that you are preaching the Word.[6]

The Thunders have been revealed

[Question] 395. Have the seven thunders which equals seven mysteries already been revealed? Were they revealed in the seven Seals, but are yet—but are yet not known to us as the thunders yet?

The Thunders have not been revealed

Now, there was some reason that God let this seven voices be thundered, because it must come (See?), for the… We find that Christ, the Lamb took the—the Book in His hand, and He opened that Seventh Seal. But you see, it's a hidden mystery. No one knows it. But it—it's right along with what He said: no one would know His coming; they also would not know about this seven thunder mystery. So you see, it's connected together. That much we have a understanding of it today, because the rest of it is all unfolded, but this is not unfolded.

But setting in my room, and I heard this—or not heard it, rather, but seen it unfold to this seven thunders. Now, that's as far as we can go right there. And now I trust that each and every one of you will serve God, and do that which is right, and love Him all your life and serve Him, and God will take care of the rest..[9]

Now, in doing this, I have come here for the purpose of teaching the last Vials, last Seven Vials, and the last Seven Trumpets, and the last Seven Thunders, of the Book of Revelation, tying them together in this hour that we're now living; to follow the opening of the Seven Seals, the Seven Church Ages. So, we couldn't get room to do it. So I—I hope that, soon as I can, we'll… can get a place sufficient for that, either here or in Louisville, New Albany, or either put up a tent, so we can just stay as long as the Lord leads us to do.[10]

William Branham is supposed to reveal the Seven Thunders (but did he?)