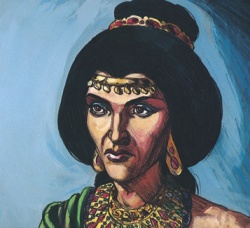 Voice of God Recordings (VoGR) in their "Catch The Vision" newsletter (CTV 2013 #2) talks about how Elijah "didn't even back down from the painted-faced queen of Israel." Because Joseph Branham is the president of VoGR, we can assume that the statements contained in CTV represent his beliefs.

Did Elijah back down from Jezebel or not?

The Bible or Joseph Branham?

Ahab told Jezebel all that Elijah had done, and how he had killed all the prophets with the sword.

Then Jezebel sent a messenger to Elijah, saying, “So may the gods do to me and more also, if I do not make your life as the life of one of them by this time tomorrow.”

Then he was afraid, and he arose and ran for his life and came to Beersheba, which belongs to Judah, and left his servant there.

But he himself went a day’s journey into the wilderness and came and sat down under a broom tree. tAnd he asked that he might die, saying, “It is enough; now, O LORD, take away my life, for I am no better than my fathers.”[1]

It is obvious that Elijah RAN from Jezebel, but in fact, he never even met her.

VoGR goes on to talk about Elijah being a man of the wilderness, performed miracles, prophesied, healed the sick, stood against denominational systems, and they say Elijah preached against women painting their faces.

Did Elijah stand against denominational systems? Or, was he standing against Ba'al worship and idolatry?

Did Elijah preach against painted faced women anywhere in the Bible? NO!

"It's pretty obvious who Brother William Marrion Branham was."

Really? We know who VoGR thinks that William Branham is but from the Bible it is obvious that he is not who they think he is. Have you checked your Bible yet?

Did you know that there is no record anywhere in the Bible of Jezebel being a harlot, a prostitute, or an adulteress? Did you know that she was a very powerful queen who was into Ba'al worship and tried to destroy Israel with it?

Did you know she was an old woman the day she died, with her make up on? Did you know she never tried to seduce Jehu the day he came to kill her as William Branham wanted you to think?

In Second Kings we read:

When Jehu came to Jezreel, Jezebel heard of it. And she painted her eyes and adorned her head and looked out of the window.  And as Jehu entered the gate, she said, “Is it peace, you Zimri, murderer of your master?”  And he lifted up his face to the window and said, “Who is on my side? Who?” Two or three eunuchs looked out at him.  He said, “Throw her down.” So they threw her down. And some of her blood spattered on the wall and on the horses, and they trampled on her.  Then he went in and ate and drank.

And he said, “See now to this cursed woman and bury her, for she is a king’s daughter.”  But when they went to bury her, they found no more of her than the skull and the feet and the palms of her hands. When they came back and told him, he said, “This is the word of the LORD, which he spoke by his servant Elijah the Tishbite: ‘In the territory of Jezreel the dogs shall eat the flesh of Jezebel, and the corpse of Jezebel shall be as dung on the face of the field in the territory of Jezreel, so that no one can say, This is Jezebel.’ ” [2]

Do you know the story of Jezebel? Was she fed to the dogs for painting her eyes and adorning her head? Is this what you have been taught? Did you know that is a LIE?

When VoGR speaks of miracles, prophecies and healings, did they forget this scripture as well?

Do you care what the Bible says?

But Elijah, in the midst of it all... Yet many of the children of Israel, thousands of them had compromised and wanted to live the modern trend of life. Yet Elijah would not compromise. He told Jezebel her place and how she must do. Oh, she hated that prophet. But just the same, she wouldn't claim him, but he was her pastor.[4]

Then when good old Elijah the prophet, a true servant of God, come to the end of his road, God told him one day, He said, "Elijah, you've preached long enough now. You've fought Jezebel and all of her paint and everything till you've had enough of it." Said, "Come down to the Jordan." And here he goes, got down to the Jordan. There the old muddy stream coming down yonder, chilly, icy water, like every man has to face: Jordan, death...[5]

Elijah, after he'd bawled out Jezebel so much... We need another one today. That's right. Bawled her out... How the... We need one today. How the people... Oh, it's a disgrace, to what the people does today. It's just... And all of them call themselves Christians. And some of these fashions that our modern women are wearing, some of these women with them water-head haircuts, you know.[6]

Was there ever a time that it become a woman's world before? Yeah. According to history, in the days of Elijah, there was a woman named Jezebel. And she got rulership over the church of God, which the Bible says she will again in the last days; her spirit, through a church, a organization.[7]

Elijah had cursed Jezebel about her painted face, and her way she had got all the people doing. And he was tired and weary, and was about ready to go Home.[8]

And look at Elijah, he condemned all them painted-faced Jezebels of his day, them immoral women.[9]

Retrieved from "http://en.believethesign.com/index.php?title=Jezebel&oldid=22894"
Categories:
This page was last edited on 9 September 2017, at 18:34.
Content is available under Creative Commons Attribution unless otherwise noted.
Privacy policy
About BelieveTheSign
Disclaimers
Mobile view