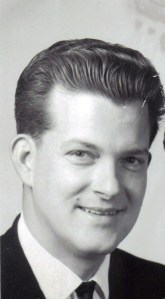 This article is one in a series outlining a number of William Branham's visions that appear to have failed - you are currently in the article that is in bold:

There were also many visions that changed significantly over time. William Branham told Fred Barker that one day he would "say the right thing and it’ll all be over.”

In March 1965 at age 33, Fred Barker, a singer, songwriter and evangelist, who had sung at several conventions where William Branham had spoken, suffered a brain aneurysm. His throat was paralyzed and, according to the doctors, he was near death.

Approximately one month later, William Branham was in Los Angeles preaching. Richard Shakarian and Gene Scalf (Demos Shakarian’s son and son-inlaw) brought William Branham to see Fred Barker at the hospital. The following is the testimony of Fred Barker as related in the Only Believe magazine:

As [William Branham] walked through the door, he took oft his hat and he said to me, “I don’t have a word from the Lord for you, Freddie.” He sat down beside my bed, and we started talking about the birds that were on the windowsill, but after a few minutes, he began to tell me about the 5 instances of the Spoken Word. I had never heard anything like that before, and at that time I had no idea of what he was talking about.

Brother Branham prayed for me. Then, as he started for the door, he stopped and turned towards me and placed his hat, which was in his hand, over his chest. “Freddie,” he said to me, “it’s important what you say to the Lord. Some day, like the Syrophenician woman and Sister Hattie Wright, you’ll say the right thing and it’ll all be over.”

...The Lord has richly blessed us in so many ways, but physically I am still confined to a wheelchair. I have never completely regained my health. I realize now that Brother Branham must have seen a vision as he was leaving my room, in order to have said to me what he did. I am standing on that, and am believing that in God’s time, and by inspiration, that I will ‘say the right thing’, and what was spoken on that day will be fulfilled."

Sadly, Fred Barker died a number of years ago without being healed. William Branham said that Fred Barker would one day "say the right thing and it’ll all be over".

Is this another vision that failed?

The boys, the other day, Brother Shakarian's son and his son-in-law, taken me up here to pray for a young fellow, singer, dandy boy. Just come back… Fred Barker, that was his name, just come back from a trip. And they called me, that, "Fred was dying." And then, 'fore I could get in the house, another message come, "He may be dead right now." And he said he had had a—a hemorrhage in the brain, and he was paralyzed, and—and he was dying, and his wife wanted me to pray for him. 56 And I thought, "Oh, if I try to fly, he'd be dead 'fore I get there, and may be dead now." So, I called quickly and got the little lady on the phone. And—and we got the phone hooked up, and to Fred's ear. He couldn't swallow. They was giving him artificial swallowing. And when we prayed for him, he said, motioned, take it out of his throat. He could swallow. The doctors didn't believe it. They took it out, and he could swallow. He was setting up, the other day.[1]