Controversy over the Date of Easter 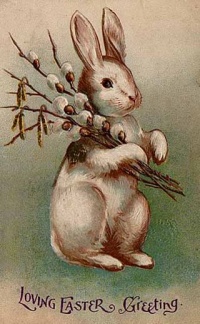 Just in case you thought the issue of a bunny was controversial.

It is astounding that the date of Easter caused so much contention in the early church given Paul's statement that dates are a matter of personal preference and should not be the subject of judgment and disputation.

The cause of this appears to be that Jews were exiled from the city of Rome. As a result, Rome became the first all-Gentile Church for a time. Gentile Christians did not follow the Jewish Calendar, and decided to celebrate the resurrection (Easter) on the first Sunday after the full moon after the March equinox.

Polycarp was a well-known and venerable figure of the first half of the second century. From Tertullian, Irenaeus, and Eusebius we learn that he had listened at Ephesus to St. John the Apostle, who had appointed him bishop of nearby Smyrna. Polycarp was a man of more than eighty when a violent persecution broke out in Smyrna and finally engulfed him (A.D. 156)[2]

Irenaeus recounts the specific instance when Polycarp visited Rome in the time of Anicetus (ca. 155): “although they disagreed a little about some other matters as well, they immediately made peace, having no wish for strife between them on this matter” (5.24.16). Neither Polycarp nor Anicetus was able to persuade the other of the correctness of his own observance, but “under these circumstances they communicated with each other, and in the church, Anicetus yielded the celebration of the Lord's Supper to Polycarp, obviously out of respect, and they parted from each other in peace, for the peace of the whole church was kept by those who observed and those who did not.”[3]

Victor was the 13th Bishop in Rome. He excommunicated all of the churches in Asia Minor for disagreeing with his interpretation regarding the date of the celebration of Easter. Most of the churches in Asia Minor had significant Jewish populations, while Rome had little Jewish influence. Irenaeus addressed Victor in a letter (only a fragment of which remains), warning him that if he persisted in the course on which he had entered, the effect would be to rend the Church in pieces. In 190 or 191, Irenaeus travelled to Rome to meet with Victor, who received and accepted the rebukes of Irenaeus. The debate of the date of the passover continued to be handled independently by each Church until the Council of Nicaea.[4]

The First Council of Nicaea and Easter

In the short-term, however, the Council did not completely solve the problems it was convened to discuss and a period of conflict and upheaval continued for some time. Constantine was succeeded by two Arian Emperors: his son, Constantius II, and Valens.

Pagan powers within the Roman Empire sought to re-establish paganism (Arbogast and Julian the Apostate). Arians regained nearly all of the rights they had lost, and consequently, Arianism continued to spread within the Church during the remainder of the fourth century.

The First Council of Nicaea in 325 A.D. repudiated Quartodecimanism (Easter on the 14th of Nissan). It also gave jurisdiction over large regions to the bishops of Alexandria, Rome, and Antioch.