An Open Letter to William Branham 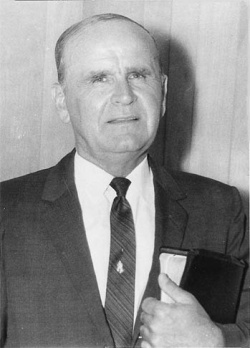 And, yes, we do realize he is dead, but this is what we want to say to him given his major impact on our lives (more about that below).

We called you 'brother' because you said if we love you we should call you brother. It wasn't just a term of endearment, it was a title of utmost respect.

We were honored to be allowed into your world, to share the pain of your difficult childhood, to understand your trials as a young adult. We felt privileged to peer into your 'spiritual gifts'. We were awed by your supernatural encounters, and certain you were 'one of a kind' in the midst of religious chaos and confusion. You even convinced us you were an Old Testament prophet and the very 'voice of God' to the world.

You told us about a bridge, a voice, and a cloud. They were of utmost importance. We talked about them often. We even witnessed to others about them hoping that they might see how special you are, and might be convinced to follow you. We were touched by your humility and how you made yourself seem so insignificant, yet you were the only person on earth who could truly understand the Bible. You told us that God shared secrets with you that no one else was allowed to know, but that you could tell us because we were special. We knew we were special because we believed you. You taught us that believing your message was the only way to be saved, and you even said it was proof that we had the Holy Ghost. We dared not question you, as we didn't want to be lost or without the Holy Ghost.

You told us we were the little elect group, specially chosen by God to know the truth, while all the other churches on earth walked in error. We believed you and clung to our 'superior' truth. You told us we were the bride of Christ, because only the bride would hear that 'certain sound', and that everyone else was canon fodder or serpent's seed. We felt very important. You told us we didn't have a thought coming, that we were not to lean to our own understanding, so we stopped thinking for ourself and placed our trust implicitly in you.

You said that prophets were eagles who could fly higher and see farther than any other bird. You told us we were little eaglets just waiting to hear the 'eagle cry', and that we could soar high into the heavens. You told us that no matter what anyone else said, we must "only believe" because you had special revelations from an angel. We all sang "only believe" from the bottom of our hearts.

We followed your rules so we could apply the 'token' to our homes. We knew we would be spared from God's wrath when His judgement annihilated our country, which you had condemned to hell. You said that in Heaven you would be gathered with your people. We were so grateful to be those people who would gather around you beyond the curtain of time, screaming "Our precious brother!"

So, Brother Branham, we would like to ask you:

What we now know

Brother Branham, we may never know your motives, but the truth is, we don't need to know them.

AND WE ARE SO THANKFUL.

Why am I writing to a dead man? Because his lies live on to deceive other precious souls. But, God is faithful as He continues to graciously open the eyes of His dear children. And in the end, the victory belongs to Jesus Christ.

And with this being said, Brother Branham, we bid you farewell.