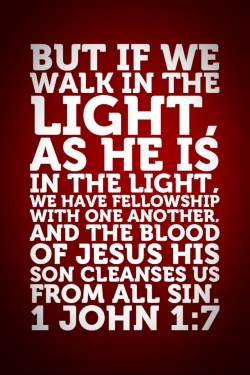 But if we walk in the light, as he is in the light, we have fellowship with one another, and the blood of Jesus his Son cleanses us from all sin.[1]

William Branham believed that this passage taught if Christians did not walk in the light for their age, there was no forgiveness for sins. But is this what scripture really teaches?

The message of the hour

Where did the concept come from"

We have proved that William Branham borrowed some of his teaching of the Seven Seals from Charles Taze Russell. It is interesting to note that Russell also used the phrase "the message of the hour":

[Revelation] 3:4. BUT thou hast a few names [even] in Sardis which have not defiled their garments. — But have given due heed to the Message of the hour, the Ransom.[2]

This passage reveals three things that are bound together in the Word of God and that cannot be separated. These are:

A question that must be asked is this - What is the status of people who claim the cleansing and protection of the blood, but who do not lead the kind of life that entitled them to receive it.

According to 1 John 1:7, the blood of Jesus Christ cleansing us is a consequence that follows after we have met a condition introduced by the word if: “If we are walking in the light.” Then two results follow:

Unfortunately, many Christians deceive themselves about their right of access to the blood. They keep quoting the latter part of 1 John 1:7, but in many cases they have never fulfilled the condition preceded by “if ”: walking in the light as He is in the light.

Fellowship is two-directional. First, with God and, second, with our fellow believers. This makes fellowship with God, and with one another, of unique significance in our lives. The closer our fellowship, the brighter the light. As we mature in Christ, we come to a place where there are no longer any shadows, no dark corners, nothing swept under the rug, nothing covered up.

Is that a difficult thing for people to do? The answer is yes! The light seems so bright. We tend to recoil from it, saying: I could never bring that terrible thing out into the open—that awful memory, that guilty secret, that enslaving habit—I could not expose it to the light. The natural man shrinks from it. But the wonderful secret is this: When your sin is exposed to the light, the blood of Jesus washes it away and everything is clean.

God actually says this in Jeremiah 31:34: “I will forgive their iniquity, and their sin I will remember no more.”

God does not have a bad memory, but He does have a supernatural “eraser” that blots out the memory of sin once it has been forgiven.

On the other hand, if you do not bring your sin into the light, your sin remains. Consider once again this tremendous principle: The blood of Jesus cleanses only in the light.

Suppose that we have met the conditions: We are walking in the light, and we are in fellowship with our fellow believers. Then we have the right to make this testimony: The blood of Jesus Christ, God’s Son, is cleansing me, now and continually, from all sin.

Remember the words of Jesus in Luke 6:

Look at how they treat those that disagree with them. Isn't the answer obvious?

Did William Branham add to the Bible?

There is something wrong with your experience, when you say that you love God and refuse His Word. There is something. You refuse the very… No wonder the things can't, the church is in its condition, and things cannot be done as God promised, is because you won't even receive the Word or walk in the Light. The Bible said, "Let us walk in the Light, as He is in the Light, then the Blood of Jesus Christ, God's Son, cleanses us from all sin." Sin is "unbelief."

Then if we are walking in the God-given Light of the hour, then God takes that Word that's given for the hour and vindicates It.[5]

John 1:7 makes no reference to walking in the "light of the hour". Why would William Branham point to himself and make belief in his message be the only thing that fulfills this scripture?

And this is his command: to believe in the name of his Son, Jesus Christ, and to love one another as he commanded us.  The one who keeps God’s commands lives in him, and he in them.[6]

Yes, sir, they believed, all the way along. So does Satan. Those Pharisees, who could condemn them, not believing? But they didn’t believe the Word for the hour. They were worshiping the glare of something else. It’s the same thing they’re doing today. See? They’re keeping up Luther’s predict-…traditions, or—or Wesley’s traditions, and the rest of them, the Pentecostal tradition. But what of the hour?[7]

And to you man that's listening to this, across the world, wherever you may be. There is something wrong with your experience, when you say that you love God and refuse His Word. There is something. You refuse the very… No wonder the things can't, the church is in its condition, and things cannot be done as God promised, is because you won't even receive the Word or walk in the Light. The Bible said, "Let us walk in the Light, as He is in the Light, then the Blood of Jesus Christ, God's Son, cleanses us from all sin." Sin is "unbelief." Then if we are walking in the God-given Light of the hour, then God takes that Word that's given for the hour and vindicates It.[8]

How would you know what's right? The manifestation of the spoken Word of God being made manifest, Light of the hour. Certainly. There is what the evidence of the Holy Spirit is, believing the Word of God when It's manifested. He was the Word, manifested. And some of them denied It, laughed at It, made fun of Him and called Him a—a fortuneteller, some evil spirit; there is evidence, speaking in tongues, there is evidence of the fruits. The only evidence there is, is when man believe the written Word. When It's vindicated, walk in the Light of It. Jesus was the Light of the hour because He was the promised Word of the hour, and tried to tell them so, but they were too—too much in darkness to understand It. So is it, today, now.[9]

The prophets were part of the Word. Jesus said they were called 'gods.' And they were, as long as the Word of God was brought to them. He said, "How can you condemn Me when I say I'm the Son of God? And—and, you, those… It's written in your law, 'those who the Word of the Lord come to,' you called them 'gods.'" See, the… It wasn't the prophets; it was the Word of God. And it's same thing now. And it was Jesus, same thing, the Word of God made manifest. And that is always the Light of the hour.[11]

Geographically, and also in the material, the scene is set. Isn't it time for God to come back in human flesh, "the Word that's sharper than a two-edged sword, and a discerner of the thoughts and intents of the heart," to appear on the scene, to make Jesus Christ the same yesterday, today, and forever! It's a promised Word that's been lotted for this day. We are living in this day, and God is here with us, to manifest that and make it true.'[12]

And the greatest robbery that the church of Jesus Christ ever had, is a false light, a glare of some other age, when God is trying to inject, or project, to the people, the Light of the hour.[13]

If you are true seed, you will hear that Word; the Spirit will baptize you into the body of Christ, filling you and empowering you, and you will receive the Word for your day and age. See how clear the true evidence becomes when the Word is revealed to you? [15]

In every church age we hear these words, “He that hath an ear, let him hear what the Spirit saith unto the churches.” The Spirit gives the Word. If you have the Spirit you will hear the Word for your age, as those true Christians took the Word for their age.[16]