William Branham believed that it was wrong for both men and women to wear shorts. While it may be argued from a biblical perspective that a woman wearing shorts is immodest (see 1 Timothy 2:9), is there any biblical support for condemning men who wear shorts? 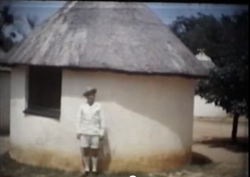 Why did William Branham preach against men wearing shorts, when he wore shorts while hunting in Africa?

Isn't this the very definition of "hypocrisy"?

hy•poc•ri•sy \hi-ˈpä-krə-sē also hī-\ noun
plural -sies [Middle English ypocrisie, from Anglo-French, from Late Latin hypocrisis, from Greek hypokrisis act of playing a participle on the stage, hypocrisy, from hypokrinesthai to answer, act on the stage, from hypo- + krinein to decide—more at CERTAIN] 13th century

1: a feigning to be what one is not or to believe what one does not especially: the false assumption of an appearance of virtue or religion[1]

This picture comes to us courtesy of a slide show given by Rebekah Branham Smith who stated that her dad took the picture for a joke because "the natives talked him into putting on the shorts which he would not otherwise have done."

The problem is that, obviously, William Branham's daughter has to defend him for breaking his own standards. Do we have any proof that he did this against his will? 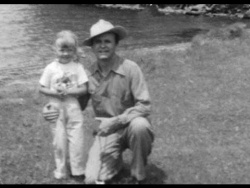 Did someone put pants on his daughter against his will?

We have had some people excuse this photo by saying that the picture clearly wasn't taken for public consumption, but only for his own family to see. Our response is, "of course it wasn't for public consumption. Who said it was? What if we had a picture of William Branham doing something else he criticized openly, like wearing a dress? Would it be OK to criticize that kind of hypocrisy? He said that a man wearing shorts was like a man wearing a woman's underneath clothes."

The issue is that William Branham screamed condemnation for men who wore shorts but then wore them himself. He ridiculed others for wearing them but then allowed someone to "talk him into it".

Are shorts an item of women's clothing?

William Branham stated that shorts were "the woman's underneath clothes" but don't men were shorts for underwear as well? Or is it that William Branham didn't wear any underwear?

Was the attire of men in battle or in strenuous activity similar to shorts? 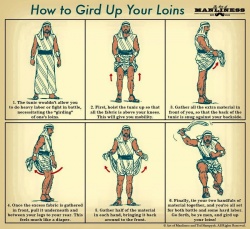 "The power of the LORD came on Elijah and, tucking his cloak into his belt, he ran ahead of Ahab all the way to Jezreel. [2]

Elijah wrapped up the outer garment about his waist to leave his legs free for running. This action is also seen in 2 Kgs 4:29 and; 9:1 as well as Jer 1:17. It is describing the adjustment one would make to their robe in preparation for a vigorous undertaking.[3] The people of Israel had been told to celebrate the Passover in this fashion, to show that they were ready to go forward (Exod. 12:11).[4]

Wherefore gird up the loins of your mind, be sober, and hope to the end for the grace that is to be brought unto you at the revelation of Jesus Christ...[5]

Peter is stating that, when vigorous action was required, long robes would need to be gathered up and tucked into the belt. This was the equivalent to wearing shorts today. Peter was saying that we need to ‘roll up your sleeves’ or ‘get down to it’.[6]

Now she has got her Adam to wearing her underneath clothes. A man put on them little old sissy-looking shorts, and get out here, I don't think there is much man to him. He is the biggest sissy I know of. See? See, she has got her perverted Adam to act like she, see, wearing her underneath clothes. She seen what she could do out yonder when she took off all of her clothes but her underneath ones. That's the shorts. Course, that's the woman's underneath clothes, and here her Adam is wearing them now. Which, according to God's original Word, "Is an abomination for a woman to put on a garment that pertains to a man, and a man to put on a garment pertains to a woman," from the original Word. Think of it!

Now, he now wears her bangs, also. He combs them down, puts a curler in them. Some of the most sickly sights I've ever seen in my life, is some of those kids out here today with their bangs combed down like this, and colored, bleached hair, with some kind of a peroxide something, and bleach their hair, and rolling it in curlers, making bangs. You big sissy! That's a horrible thing to say from a pulpit, but judgment begins at the house of God. You don't even know whether you're a man or woman. And I understand that our United States Army is coming out next in shorts. That's right. See what the perversion is? It's a woman's clothes; wears her bangs. "

Women with shorts on, belongs to an organization. Man dressed like that, is on a organization. I'll give you the abbreviation of it, B.S.S., Big Sister Society, so that's what they belong to. Come out there, a big sissy society, with them little old pants on, big old knotty-looking, dirty-looking thing…[8]