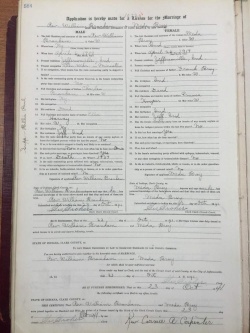 What was William Branham's actual birthday? We have four different possibilities...

According to his Marriage Certificate with Meda Broy, William Branham wrote April 6, 1909 as his date of birth. Note that this is an official government document and William Branham would have no reason to lie as to the date (click on the picture at the right to enlarge it).

That Light, that you see on that picture was hanging over my cradle when I was born. Born on a little straw tick with a shuck pillow. My mother was fifteen years old; my dad was eighteen. Five o'clock in the morning, they didn't have a window in the house, had a little door. I don't know whether you seen… How many of you ever seen one of them little—like supposed to be like a window, but it's just a little door you opened up. 98 And—and that Angel of God, at five o'clock in the morning, April 6, 1909, at five o'clock in the morning, come right in and stood over that little bed where I was laying. They didn't know what… My people before me were Catholic. And so there was no Catholic churches up there, and so they taken me over to a little Baptist church. And there I made my first visit to a church. The Baptist church is called "Opossum Kingdom Baptist Church. Opossum Kingdom Baptist Church." There's where I made my first visit to a church. [1]

I am forty eight years old in April the sixth.[2]

The Marriage Certificate of Willliam Branham and Hope Brumbach lists April 8, 1909 as the date of birth of William Branham (click on the picture at the right to enlarge it).

Why did William Branham change his date of birth?

William Branham tells on several occasions of his encounter with a medium:

William Branham appears to have believed a spiritualist astronomer over the birthdate that his parents had told him. 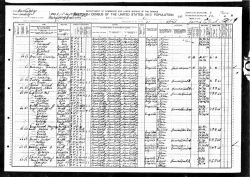 According to the U.S. Census form dated April 15, 1910, Charles and Ella Branham (spelled Brainon, possibly because Charles was running from the law) entered “Willie” as 3 years old as of April 15, 1910. As a result, William Branham's birthday would have to be April 14, 1907 at the latest.

On September 29, 1951, William Branham was speaking in New York City and stated:

And Brother Bosworth here is one of the greatest teachers on Divine healing that I ever heard in my life... how I could speak of him, of how down through the age when I was a little boy in school, he was out there preaching the Gospel and praying for the sick, when I was just a boy. Your mothers and dads listened to him preach the Gospel on Divine healing, both of them out of Zion, Illinois. Candidates, or, out from under the—the great teacher, late Doctor Dowie. How Doctor Dowie, in his death, prophesied that I would come to that city forty years from the time that he died. Not knowing nothing about it, he died on one day, and I was borned on the next. And forty years to the day I entered the city, not knowing nothing about it. Oh, how God's great move is coming together. I hear the sound of abundance of rain.[5]

Alexander Dowie died March 9, 1907 which would mean that William Branham's date of birth was March 8, 1907.