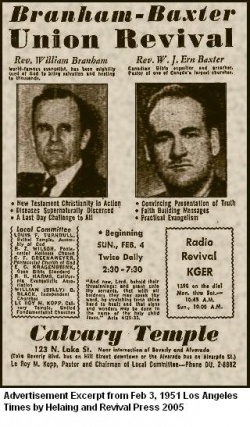 Controversy surrounded Branham right from the start of his public ministry.

In 1947, a minister in Saskatchewan, Rev. Alfred Pohl, stated that many who Branham pronounced as healed later died.[1]

...his question still hit me very hard. "Brother Pohl," he said, "you were there beside my wife's bed the night Mr. Branham prayed for her and pronounced her healed?" "Yes," I replied, " I was right there." He went on, "Can you tell me why it is that my wife who was healed just a few days ago is now in the grave?" My friends, I believe that was one of the hardest questions that I was ever called upon to answer! My heart went out to this dear brother. I felt with him. But how could I answer him?[2]

Let me ask, did this sort of thing happen to those who were healed by the Lord Jesus or by His apostles? Where, then, is it recorded? As Christians we sometimes think that we're "charitable" if we overlook these things, but is this real "charity" or love? Is it loving to permit this type of thing to be carried on in our churches, to the needless suffering, agony, disappointment, and expense of the sick? And more importantly, is it scriptural not to deal with the false, the counterfeit? (see Titus 1:7-14).[3]

In 1948, W.J. Taylor, a district superintendent with the Pentecostal Assemblies of Canada, raised the same concern. He and his executive asked for a thorough investigation, presenting evidence that claims of the number of people healed were vastly overestimated. While he expressed warm regard for Branham as a person, he stated, "I firmly believe that there is a possibility that this whole business is wrong".[4]

He possessed an extraordinary diagnostic gift and could identify the illnesses (sometimes even the names) of persons he had never seen. Unfortunately his healing prognosis was accurate only in rare cases. The excuse of healing evangelists in such cases has always been: The patient did not really believe; for they were convinced that faith leads automatically to health.[5]

Now, it's brought to pass. I hate to say this. God have mercy. Look, friends, down through the rest of the country, over in Phoenix, over in Houston, over in San Antonio, down in Arkansas, down across the country, thousands are being healed, coming through there, of all kinds of sickness and diseases. Oakland, know your day.[6]

Well, you should go home now, rejoicing, sister, 'cause you're healed. God bless you. Let's say, "Praise the Lord," everyone. That's mighty fine.[8]

Young lady, you was healed when you walked to this line. Friends, I want you to open your eyes. I... This is the... I--I've said it was a poorest place for faith, but I believe it's greatest this afternoon. This girl was healed before I took hold of her hand. Just... I felt something move, and the girl was healed. A strange feeling come to you, didn't it? You're healed, young lady. All right. You mark my word and see if that isn't right. Glorify the Lord.[10]

...Then you would ask me, "Does everybody get well, Brother Branham?" Everybody that truly believes gets well. Thousands have been healed.[11]

And, friends, look. It's just not Tallahassee; this has went around the world. See? Everywhere, literally tens of thousands and thousands and thousand times thousands of people healed and saved and filled with the Holy Spirit and...?... See? It's not nothing. It's been tried under every fiery trial, I believe it can be put before, and all. Here's my manager? Is that right, Brother Baxter? Through everything. And always, God is triumphed, never failed one time and can't fail 'cause it's God.[12]

I seen about, oh, I guess thirty or forty thousand healed with one prayer. That's right.[14]

And he went throughout all Galilee, teaching in their synagogues and proclaiming the gospel of the kingdom and healing every disease and every affliction among the people.  So his fame spread throughout all Syria, and they brought him all the sick, those afflicted with various diseases and pains, those oppressed by demons, those having seizures, and paralytics, and he healed them.[15]

That evening they brought to him many who were oppressed by demons, and he cast out the spirits with a word and healed all who were sick.[16]

And wherever he came, in villages, cities, or countryside, they laid the sick in the marketplaces and implored him that they might touch even the fringe of his garment. And as many as touched it were made well. [17]

And he came down with them and stood on a level place, with a great crowd of his disciples and a great multitude of people from all Judea and Jerusalem and the seacoast of Tyre and Sidon, who came to hear him and to be healed of their diseases. And those who were troubled with unclean spirits were cured.  And all the crowd sought to touch him, for power came out from him and healed them all. [18]

God anointed Jesus of Nazareth with the Holy Spirit and with power. He went about doing good and healing all who were oppressed by the devil, for God was with him.[19]

The people also gathered from the towns around Jerusalem, bringing the sick and those afflicted with unclean spirits, and they were all healed.[20]

And when this had taken place, the rest of the people on the island who had diseases also came and were cured.[21]