The Importance of Vindication 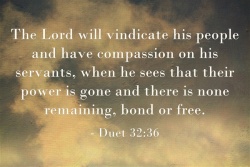 William Branham used the word "vindicate" and its derivations (vindicated, vindicates, vindicating, vindication and vindications) 1773 times in his recorded sermons between 1947 and 1965. His use of the word increased significantly in the latter years of his ministry (1220 times from 1962 - 1965).

This is interesting given that the King James Version of the Bible never uses this word (although it is used in more modern translations).

Is vindication really that important?

What does vindication mean?

1 obsolete: to set free: DELIVER
2: AVENGE
3 a: to free from allegation or blame

(2): to provide justification or defense for: JUSTIFY

c: to protect from attack or encroachment: DEFEND

vin•di•ca•tion \ˌvin-də-ˈkā-shən\ noun 1613: an act of vindicating: the state of being vindicated specifically: justification against denial or censure: DEFENSE[1]

In the Old Testament, false prophecy was considered criminal in nature, punishable by death:

But the prophet who presumes to speak a word in my name that I have not commanded him to speak, or who speaks in the name of other gods, that same prophet shall die.’ 21 And if you say in your heart, ‘How may we know the word that the LORD has not spoken?’ — when a prophet speaks in the name of the LORD, if the word does not come to pass or come true, that is a word that the LORD has not spoken; the prophet has spoken it presumptuously. You need not be afraid of him.[2]

In order to know whether to obey the prophetic word, and in order to condemn the false prophet, criteria had to be established by which a distinction between true and false prophets could be made. In some cases, at least, the distinction could be made easily; when a prophet in Israel spoke in the name of other gods, he was not only a false prophet, but he was also guilty of breaking the first commandment, and therefore was deserving of the death penalty. The more difficult case to distinguish would be that in which a prophet actually spoke his own words, but claimed to be speaking the words of God, and therefore—among other crimes—was guilty of gross presumption.

The criteria for distinguishing the true words of God are expressed very succinctly in two clauses, (a) The word is not true—the Hebrew rendered literally is “the word is not.” The implication seems to be that the word has no substance, or that what the prophet says simply “is not so.” That is, the word supposedly spoken by God through the prophet was not in accord with the word of God already revealed and it was therefore automatically suspect, (b) … Or does not come to pass—this clause describes prophetic words of a judgmental or predictive nature. The truth of the words would lie in their fulfilment.[3]

1 John 4:1 warns Christians not to believe every spirit, “but test the spirits to see whether they are from God, because many false prophets have gone out into the world.” Similarly, Paul encourages the believers at Thessalonica that even as they welcome prophetic utterances, they must be vigilant in testing all messages, holding fast to what is good and rejecting all that is evil (1 Thess. 5:20–22). In Paul’s letter to young Timothy we hear the most explicit warning to reject presumptuous persons who oppose the truth and are corrupted in their minds (2 Tim. 3:1–8).[4]

The course of time

It is true that the credibility of the prophet could be tested only in the course of time. In the case of Samuel, the text states that “YHWH was with him and let none of his words fall to the ground, and all Israel knew that Samuel was established as a prophet of YHWH” (1 Sam 3:20–21). It is with that test of time that we are now able to clearly judge whether William Branham was vindicated or not as a true prophet.[5]

Conduct if a prophet is judged as false

The concluding remark concerning the “false prophet,” that “you shall not fear him” (Hebrew - תגור ממנו), means that the people should not “fear” in the sense of attempting to follow him, that is by “walking in his ways” (see the use of the verb, ירא, “to fear,” in Deuteronomy 10:12).[6]

Was William Branham vindicated as a prophet?

The passage of time has not been kind to the ministry of William Branham:

As a result, an objective evaluation of William Branham's life and ministry will lead one to conclude that he was not "vindicated" under either Old or New Testament standards.

I'm… I am neither the Father, Son, nor Holy Ghost. I am a man, your brother, vindicated—ministry vindicated by a supernatural Being, not me, the Angel of the Lord that has come from God to minister these blessings to you.[7]

...that we might become You, sons of God, to reflect the Word of God, vindicated, made it manifest through our ministry life that You have given us.[8]

The entire mystery is unfolded. That's the ministry of that angel. See? Be so simple people just drop off the top of it. But yet it'll be perfectly a-vindicated everywhere, just be perfectly normal. See? Everybody that—that wants to see it can see it. See? That's right. But those… Jesus said, as He said when He come, said, "You got eyes and can't see, Isaiah said you did. (See?) And you got ears and you can't hear."[9]