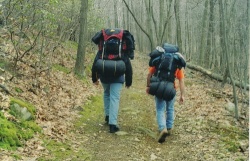 2 brothers, Onlybelieve and Berean, set off on a long journey to the Kingdom of Atlantis. Before they started the journey the King of Atlantis gave them each a small black book containing all the info on how to get to Atlantis.

Brother Bill offers to guide them

As they set off they were stopped by a man named Brother Bill, who was selling guided tours to Atlantis. When Bill bragged about his successful tours to India and Africa, Onlybeleive immediately bought into the message of Bill. However, Berean was reluctant and told Onlybelieve he was going to call the King to check Brother Bill's credentials first. But after Bill told a story of 16 men falling off a bridge and drowning during the trip to Atlantis without him, Berean soon agreed to have Bill guide them.

Bill gave them so many secret maps, books and tapes that the 2 brothers needed to travel with big heavy packs. They felt special and looked down upon the other travelers who had only the small black books to guide them.

Around 1977, Berean began to question Bill's guidance and asked Onlybelieve why they were still not at the gates of Atlantis as Bill had stated under divine inspiration.

Onlybeleive quickly replied that "it was only a prediction."

"What about the the time Bill promised a big brown bear for dinner and we went to bed hungry?" asked Berean.

Onlybelieve reminded Berean of the plane promised to them by Bill. They would be able to put their heavy packs and tent in the plane, fly around the world and then straight up to Atlantis.

The thought of the plane was just enough to get them both back in step.

As time went on "only" Bill was allowed to read from the little black book given to them by the King.

Berean decided that when Bill was not around he would remind Onlybelieve that the book given to them by the King of Atlantis was all they needed.

On February 28th, Bill was several hundred miles away in the city of Houston while Onlybeleive and Berean camped alone on Mt. Sunset in Arizona. Knowing that Bill wasn't going to be back for over a week Berean finally got the nerve to call the King for answers, since the pack of books,tapes and special maps had become much too heavy for the long journey.

That was the last time Berean wore the heavy pack given to him by Bill.

Seeing Berean run around so happy, Onlybeleive became curious for the first time since they had started the trip

So he asked Berean, "What happened?"