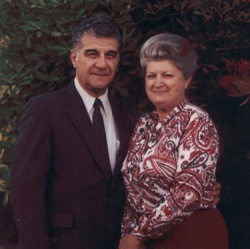 David Mamalis spent much of his life transcribing the sermons of William Branham, and referencing paragraphs from these sermons to scriptures in the Bible. His works can be found on the internet at www.thefreeword.com. The following article is adapted from Rev. Mamalis' biography on that website.

Apostolos David Mamalis was born in Athens, Greece in 1930. His home was at the foot of the Acropolis, from which he daily walked across Mars’ Hill to attend school. He continued his college education in Switzerland, and it was during this time that the brothers of the church he attended prophesied over him that the Lord had a definite work for him to do.

David Mamalis came to the United States in 1955. He graduated from Southern California Bible College with a degree in Theology, and was also ordained as an independent minister. This is where he met his wife, Pauline. After their marriage in 1959, he attended San Francisco State University to further his education.

Out of the blue: Meeting William Branham

In 1961, David Mamalis was traveling to Visalia, California, to attend one of William Branham’s meetings. As he searched for the hotel where he was registered to stay, he became lost and drove several miles out of the way. He decided to pull into a service station to get directions. When he pulled in, William Branham was sitting there in his car waiting, and he asked David Mamalis, “Are you looking for me?”

William Branham led David Mamalis back to his hotel, and they talked about the Bible. Later that evening during the service, “Jehovah-Jireh,” preached on February 26th, David Mamalis felt that William Branham was speaking directly to him when he referred to Abraham separating himself. David Mamalis cherished the times he had to spend with William Branham, especially the opportunities to advise him in the use of Greek words and their meanings.

In 1965, he attended the “Choosing Of A Bride” meeting, after which he felt compelled to leave Los Angeles, and move to Arizona. He attended Arizona State University studying Law and Library Science, and became well educated on copyright laws. He then went on to Denver University where he received his Master’s Degree in Library Science. It is evident that the hand of the Lord was upon him through the path of education he had chosen. This equipped him with all the necessary knowledge to classify and print the message of the hour.

David Mamalis accumulated a reel-to-reel library of many of William Branham’s messages and knew of no public distribution of these messages. He felt that it was not right to have all this abundant spiritual food to himself. It was his desire to share it. So, in 1973, he formed a company called Information And Media Consultants, and furnished many people with tape libraries. During this time, he printed an Index of Brother Branham’s sermons, making it publicly known that these sermons were “Public Domain.”

In 1983, Brother Mamalis had a vision to make these sermons available in printed form. He chose to print in chronological order, because his desire was to have the benefit of being able to study all the messages in the order they were preached. This is when "The Word Publications" was formed. Beginning with the year of 1965, and working back, every message that William Branham preached was transcribed, proofread, punctuated, and Scripture referenced.

David Mamalis was also the pastor of “Phoenix Christian Fellowship” for over thirty years. His ministry emphasized the importance of the blood of Jesus, the cross, repentance, and the Holy Spirit.

Retrieved from "http://en.believethesign.com/index.php?title=Rev._David_Mamalis&oldid=20985"
Categories:
This page was last edited on 25 August 2015, at 03:24.
Content is available under Creative Commons Attribution unless otherwise noted.
Privacy policy
About BelieveTheSign
Disclaimers
Mobile view