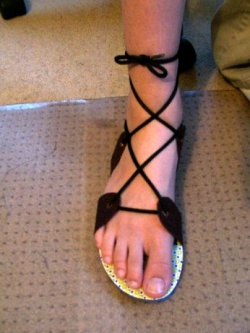 What's very strange is that in Bible times, the only shoes that were generally worn were sandals, which were all generally open-toed.

Would William Branham think that Mary, the mother of Jesus, and basically all of the women mentioned in the Bible were all dressed in an immoral fashion?

I ain't got nothing against the movie. I ain't got nothing against television. It's the rotten stuff that's on it. That's what it is. If you'd have kept it moral, it'd have had to stay moral. You couldn't sell old-fashion button shoes here in town, today, at all. Women don't want them. They want the toes out of them. The rest of the women is doing it. That's right.[1]

Now, it ain't paint, and scissors that cuts your hair that bothers you. It's that spirit in you that makes you go get it. That's what it is. Max Factor could make all of it he wanted to and lay it over there, and if you was a Christian you'd never touch it. I mean if you was baptized with the Holy Ghost and living where you ought to live (That's right.), and your pastor preach the truth and let you know about it. You wouldn't even care a bit. How could you sell old button shoes down on the street today, them high laced up shoes which have got more leather in them than a dozen pair of these little things that you pay twenty five dollars for? A little strap across the toe and a big old red painted toenail sticking out like that, and the heels flopping around through the rain, and you go down the street like that. That's right. That's right. But you couldn't sell that old fashion shoe because you don't want it; you done seen Martha Susianna out yonder wear some other kind. See? You want to dress like her. You don't want that dress that hangs loose. You want that one's like you're poured into it, because that you seen Susie on the television and the radio and in the magazine. The devil putting all that stuff around, young kids, drinking beer, Ortels '92, and Schlitz and this kind of stuff, it's… That's a lie. And nothing but… That turns young men and women to batty-eyed wretches to drink that stuff. It's the devil. It fills the insane institution. It fills the prostitute houses. It does everything else. It breaks up homes. It causes rape and murder and everything else.[2]

And I thought, "O God, how can You stand it?" And I looked over to my right, when I heard someone make out a big groan. And there set an aged woman, probably sixty years, or seventy years old. She had on those little old vulgar clothes, just about halfway up her limbs, and her poor old wrinkled flesh was just as flabby as it could be. And she had on this here lip makeup, and a great big purple thing on the side of her face, painted: a little pair of shoes on, sandals, with purple toenails, painted; purple fingernails, painted. And her hair was cut real short, and curled up, and dyed blue. And I looked at her.[3]

You can't go to town today, you merchants and you business men, here in this convention… And you shoe men, what if you put the old fashion button shoe, that the women used to wear? You got a shoe hook with it when you bought it. What if you tried to sell that shoe in Chicago today? You think you'd have any business? No, sir. And it's got five times the leather that these little old stilts that they build for women with the little peg like that, and her toes sticking down, and their heels sticking up. Charge them twenty-five to thirty-five dollars for about forty cents worth of leather, and they're silly enough to buy it. But why is it? Why don't the merchant… If he tells them the truth, they don't want it. That's exactly right. The skirt that your mother used to wear that covered her all over, and she probably paid three dollars, or a dollar and a half for it, and you go downtown and pay thirty-five dollars for a little vulgar thing that the devil's poured you in to get out here and make you answer to adultery at the day of judgment. Look out, preacher. You say, "I never did commit adultery." I don't know about that. The Bible said, "Whosoever looketh upon a women to lust after her, has committed adultery with her already in his heart." And it don't matter how moral you live, how clean you live, how honorable you live to your husband; if you dress yourself to make a man look at you like that, at the judgment bar the sinner that answers for adultery, you'll be the one that committed it. That's right. Now, take that with you, my dear friend. Think it over for a little while.[4]

I think even the women is getting super dressing, modern age. The old-fashion shoes, they had some leather in them, you buy them about three dollars a pair, the very best kind, had more leather in them than a dozen pair has got today, that you pay twenty-five dollars for. But it has to be the super type, you know, heels about like that, and no toes in it, but it's super. You see, it's the thing. You have to almost be in super curves to walk in it, you see. That's right. Everything has got crazy, to me, see. But it's a—it's a super age. It's a super time.[5]