William Branham told a story of how he prophesied that the Ohio River would flood Jeffersonville and New Albany, Indiana, and that the water would rise 22 feet over Spring Street. 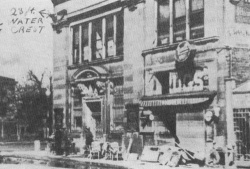 The flood took place in January and early February of 1937, with damage stretching from Pittsburgh to Cairo, Illinois. One million people were left homeless, with 385 dead and property losses reaching $500 million ($8 billion in 2012 dollars).

No mention of a prophecy until 1951

The first time that William Branham mentioned this prophecy was on July 17, 1951 many years after the flood took place. There is no independent evidence that he prophesied this flood in advance of it happening.

It is interesting that he mentions the 1937 Ohio River flood on several occasions in 1950 and 1951 prior to his claiming to have predicted the flood. Given the import of this so-called prediction, we find this failure to mention the prophecy quite telling. 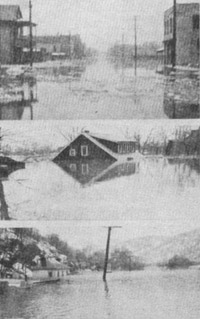 Scenes from the flood

Peter M. Duyzer, the author of a biography on William Branham, contacted Mr. Warren Schimpff, the owner of the store whose “red-hots,” or candies, William Branham bought in his day, and asked him to measure the water mark on his building.

When asked, Mr. Schimpff graciously consented to personally measure the still-existing water marks on his building. He said, “[T]he water went to the middle of the 2nd story windows & as best as I could measure with a long tape measure, the 1937 high water mark was 222 or 223 inches above the sidewalk [Approx 18’- 6”- PMD]. William Branham stated it was “Thus saith the Lord, 22 feet to the inch, exactly.” How could the Lord be off in his measurements by 3’-6” or almost 20%?[1]

And now, after a bit, It... When I got converted, It got more than ever. It predicted the 1937 flood, when hundreds of men stood there, and laughed, and turned their heads; and I predicted twenty-two feet of water over the streets. Why, I stood there and seen it in a vision. They said, "The boy's gone crazy." And just a few weeks after that, twenty-two feet of water went over the Spring Street in Jeffersonville, Indiana. See?[2]

I seen the '37 flood coming. I remember, I stood right on Fall's City Transfer Company; many you all acquainted with Jeffersonville, knows where that's at. I stood there and was preaching. I'd become a minister then. Many other things happened along the line, oh, it's numerous. How It would tell me to watch at a certain place, do a certain thing.[3]

Predicting that flood would come, I said, "I seen them measure twenty-two feet over Spring Street down here." 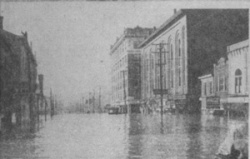 Old Brother Jim Wisehart and them laughed at me. You remember that, Brother George? He said, "Oh, Billy, in '84 it only was about six inches on Spring Street."

I said, "I seen a man come down from the skies, and take a measure stick, and stick it there on Spring Street, said twenty-two feet."

He said, "You're just excited."