Jonah and the Whale God

William Branham taught that Jonah might or might not have been out of the will of God and the main God of Nineveh was a whale god because of the city's proximity to the ocean. A couple of things were certain. Nineveh was a port city on the ocean and was a city of fisherman. But what does the Bible teach?

What does the Bible say? 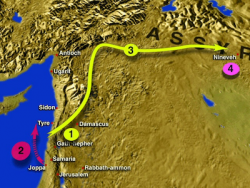 Does the Bible tell us who the God of Nineveh was? Do we know where Nineveh was located?

Where was Nineveh located?

Nineveh was founded by Nimrod (Asshur), as Gen. 10:11 states, and was situated on the eastern bank of the river Tigris, opposite the modern town of Mosul. It was about 250 miles in a direct line north of the rival city of Babylon.

When Nineveh became the capital of Assyria is not definitely known, but it is generally believed it was during the reign of Sennacherib. The prophecies of the books of Jonah and Nahum are chiefly directed against this city. The latter prophet indicates the mode of its capture. Nah. 1:8; 2:6, 8; 3:18. Nineveh was the capital of Assyria during the height of the grandeur of that empire, and in the time of Sennacherib, Esarhaddon, and Assurbanipal. It was besieged for two years by the combined forces of the Medes and Babylonians, was captured, and finally destroyed B. C. 606.[1]

We can conclude that Nineveh was located on a river and was hundreds of miles from any ocean. Why did William Branham the prophet not know that?

Was the God of Nineveh a "Whale-God" 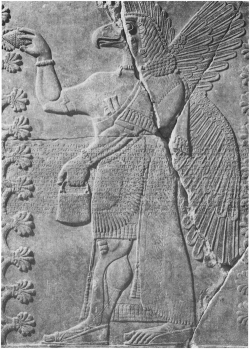 Nisroch, the god of Nineveh

The Bible is clear who the god of Nineveh was.

Nisroch was the god of King Sennacherib, in whose temple at Nineveh the king was assassinated by Adrammelech and Sharezer, his sons (see 2 Kings 19:37; Isaiah 37:38). Nisroch was the city god of Nineveh, the chief capital of the Assyrian Empire; scholars speculated that he was perhaps identical with the Assyrian god Nusku.[2]

Why did William Branham insist on saying that the god of Nineveh was a "whale god"? Did he just make it up?

Nineveh was a port city

Oh, yes. God kept him alive three days and nights. And we find him then. And we was told that all the Ninevites had turned away from God and went to worshipping animals, which is a heathen trait, and they was… Most all around Nineveh, it was on the seashore, so the occupation was fishing. And the god of the sea was the whale. He was the largest specie in the—in the ocean, and that was the god of the ocean. [3]

The people in Nineveh saw the whale spit out Jonah

I want to show you something now, show where God knows what He’s talking about. Now, the people of Nineveh… That was a big city about a half a million people, pretty near the size of St. Louis, Missouri. And they were heathens. They were in all kinds of sin. They worshipped animals, and idols, and everything, and they were—their occupation were fishermen. And so the whale was the god of the sea. So all of them was out about eleven o’clock fishing, all the fishermen pulling their nets out there in the sea, and the first thing you know, up come the sea god, the whale. Run up to the bank, licked out his tongue, and the prophet come walking right out on the bank. Sure they repented. God knows what to do. God knows how to do things to people who wants to believe. See? Jonah wasn’t out of the will of God. See, the whale god spit the prophet right out on the bank. Sure they’re going to believe his message. And there he come out.[4]

Jonah, the prophet, was a sign. His sign was when he spit, the whale spit him out upon the bank, that was a sign. Them people were heathens, fished for a living. And they seen the whale-god come in, this god of the sea, and take the prophet and spit him out upon the bank, to give the message, and down the bank he went. There was the sign. Now the Voice was, “Repent or perish!” Before God struck that nation, to tear it to pieces and sink it beneath the sea, He sent a prophet with His Word. He gave a sign, a supernatural sign.[5]

You know what God did? He must’ve put a oxygen tank or something in there. He kept that prophet alive for three days and nights, and took him on a ride, all the way across the ocean to Nineveh. Nineveh was a large city, many thousands of people. They were idol worshipers, and they worshipped gods, and their great god was the god of the sea, the whale. All of them were fishermen. Here they was out there pulling their nets, sinful as the United States is now, and the first thing you know, in come the whale (He was a god to them.), opened up his mouth, stuck out his tongue, and the prophet walked off like a gang plank. There come the god, spitting the prophet out. No wonder… See, God had to do it that way. God knows what He’s doing. No wonder they repented at the preaching of Noah—or Jonah. Because why? That he was… The whale god spit him out on the bank. The prophet walked right out of the whale’s mouth and begin to preach. Sure they repented. God does things in supernatural ways, His wonders to perform—certainly.[6]