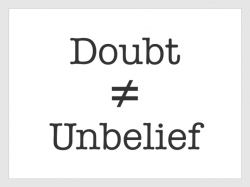 Is all doubt bad?

Tim Keller in his book, The Reason for God: Belief in an Age of Skepticism (Dutton: Feb 2008), pp. xvi-xvii) states the following:

A faith without some doubts is like a human body without any antibodies in it. People who blithely go through life too busy or indifferent to ask hard questions about why they believe as they do will find themselves defenseless against either the experience of tragedy or the probing questions of a smart skeptic. A person's faith can collapse almost overnight if she has failed over the years to listen patiently to her own doubts, which should only be discarded after long reflection. Believers should acknowledge and wrestle with doubts — not only their own but their friends' and neighbors'. It is no longer sufficient to hold beliefs just because you inherited them. Only if you struggle long and hard with objections to your faith will you be able to provide the grounds for your beliefs to skeptics, including yourself, that are plausible rather than ridiculous or offensive. And, just as important for our current situation, such a process will lead you, even after you come to a position of strong faith, to respect and understand those who doubt.

But even as believers should learn to look for reasons behind their faith, skeptics must learn to look for a type of faith hidden within their reasoning. All doubts, however skeptical and cynical they may seem, are really a set of alternate beliefs. You cannot doubt Belief A except from a position of faith in Belief B. For example, if you doubt Christianity because "There can't be just one true religion," you must recognize that this statement is itself an act of faith. No one can prove it empirically, and it is not a universal truth that everyone accepts. If you went to the Middle East and said, "There can't be just one true religion," nearly everyone would say, "Why not?" The reason you doubt Christianity's Belief A is because you hold unprovable Belief B. Every doubt, therefore, is based on a leap of faith.

...the only way to doubt Christianity rightly and fairly is to discern the alternate belief under each of your doubts and then ask yourself what reasons you have for believing it. How do you know your belief is true? It would be inconsistent to require more justification for Christian belief than you do for your own, but that is frequently what happens. In fairness, you must doubt your doubts. My thesis is that if you come to recognize the beliefs on which your doubts about Christianity are based, and if you seek as much proof for those beliefs as you seek from Christians for theirs — you will discover that your doubts are not as solid as they first appeared.[1]

The inevitability of doubt

Abraham was a man who was deep into a life of faith. He had left everything… his country, his culture, his family… trusting on the promise of God. He is also the man who half the human race, essentially three world religions, looks to as a paragon of faith, who has just had, first of all, a word of the Lord, a clear, audible revelation, but he was also filled with with doubt.

Abram said, “O Lord GOD, what will You give me, since I am childless, and the heir of my house is Eliezer of Damascus?”[2]

Then Abraham fell on his face and laughed, and said in his heart, “Will a child be born to a man one hundred years old? And will Sarah, who is ninety years old, bear a child?”[3]

So how do you think you’re going to do what Abraham could not do?

Probably, you’re never going to get past it. That means there will always be to some level of doubt in anyone’s life. There has to be. Doubt, in a sense, is a problem that never goes away. It is an inevitable thing, but look at this incredible balance the Bible has here and everywhere. What an incredibly nuanced, balanced view of doubt.

In spite of these wonderful revelations twice Abram says, “But how do I know? How can I really trust? How can I know? I’m filled with doubts.”

Does God say, “How dare you question me?” Never, and yet does God say, “Well, that’s the way it is. We all live with doubt and we can’t help it”? No. On the one hand, God does not condemn. On the other hand, he challenges it. He keeps coming after him. There is a remarkable balance.

Thomas doubted but Jesus did not condemn him. When you express doubt and say, “My faith is weak,” instead of God saying, “How dare you?” God says, “Here, I will help you to have faith and not doubt.” He says, “Doubters are welcome because honest admission of weakness and difficulty and struggle is the way you become Abrahams.”[4]

When Jesus talks about faith, he always says, “Faith is not the opposite of thinking. Doubt is the absence of thinking.” For example, he’s talking about possessions in Matthew 6. He says, “Don’t worry about what you will eat, or what you will drink, or your body, what you will put on.” He says, “Don’t worry about those things. Consider the lilies of the field; God takes care of them. Consider the birds of the air; God takes care of them. Won’t he take care of you, O ye of little faith? The pagans run after these things, material possessions, but not you, O ye of little faith.”

In Luke 8, Jesus is asleep in the storm, and the disciples are seeing the storm, and they’re seeing the waves. They’re saying, “Oh my word, we’re going to perish!” Jesus Christ wakes up, and he looks at them and says, “Where is your faith?” He doesn’t say, “You need more faith.” He says, “Where is your faith? Get it out. It ought to be here. Look, you saw me raise people from the dead. You saw me promise to you I was going to take you this place and this place and this place. You saw these things. You knew what I can do. You knew who I was, and yet when I was just out of sight, you were looking at the waves. You were looking at the waves, and so you were scared.”

He doesn’t say you need more faith. He doesn’t act like faith is this mysterious thing that has to be whipped up, some people have and some don’t. He says, “You know what you should have been doing. Where is your faith? Get it out. It ought to be here.” Jesus specifically applies this to possessions.

He says, “If you worry about possessions, if you’re consumed about money and about what you eat and what you drink, you show you don’t really know, you’re not being controlled by what the Bible says about God the Father. God the Father owns everything. God the Father will take care of you. He clothes the grass of the field. He takes care of the birds of the air.”

How did Jesus deal with doubt?

There was a person in the Bible that thought that Jesus was the messiah but later on he began to have some doubt.

How did Jesus deal with this man's doubt?

Jesus did not say, "How could you doubt me, John?" He did not condemn John for doubting. What he did was point to the evidence and to tell John's followers to go back to him and tell John the Baptist what they saw.

Jesus did not condemn doubt. He simply pointed to the evidence.

William Branham admitted that we had a right to doubt him. This is the correct approach. If Paul commended the Bereans in Acts 17:11 for not simply accepting his word but going to the Bible to prove it, why wouldn't we take the same approach to William Branham?

You've heard me never, as far as speaking, I'd say, "God made me His prophet." I've heard people say, on tape they picked it up when the inspiration was on, but that was Him speaking, not me. See? Better for Him to tell you that, than for me to tell you that. See? More you can believe Him; you got a right to doubt me.[9]

William Branham also believed it was healthy to ask questions. In fact, that was what contributed to a strong church:

Now, if anyone's got any questions that they want to hand in, why, just push them right on up, let some child bring them or whatever you want to. Or maybe, if we get through… I—I got about six here on one page, and then here, then we got two over there. Now, we're—we want to find out. The reason we do this is to find out what's on the people's mind, what they're thinking about. See? And that's what makes a good strong church. You've got to have the—the times, just like you got to comb the cockleburs out like, you know, and everything, get all the—the things out of the way so that you can move steadily. So now that's the reason we have question night once in a while, is to find out. [13]

William Branham at times confused doubt with unbelief, but they are actually two different things.

The first time that the devil met Jesus Christ, he doubted Him. Doubt always is of the devil. That's where the first sin come. There is no other sin but doubt. Unbelief is the original and only sin.[14]