Some message believers will go to any length to prove the message is true, including fudging the facts a bit.

Faking The Hall of Religious Art in Washington, D.C.

And one of them is in Washington, DC, in the religious Hall of Art, with a note under it, "The only supernatural being was ever photographed in the history of the world." And now, then, if you're ever through there, drop in, see it.[1]

The following picture has been used on the internet to "prove" William Branham's comment is true: 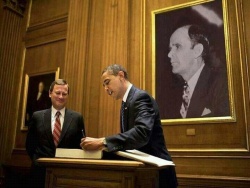 The problem with William Branham's statement is that there is no Hall of Religious Art in Washington, D.C. There is a copy of the picture that someone sent to the U.S. Library of Congress for preservation. But the photo does not hang on the wall and there is no caption underneath it. Rather, it sits in a filing cabinet. We have personally been to the Library of Congress and have seen the photo in the file folder. It was never hanging on the wall but remains in a filing cabinet.[2]

For those that want to know exactly how this was done, go check out funnywow.com 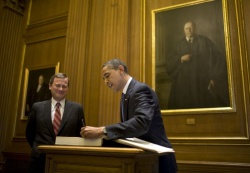 Faking the fulfillment of the Municipal Bridge vision

A fake newspaper article is being circulated that purports to show the fulfillment of the Municipal Bridge vision.

The problem is that if one checks the facts it is obvious that the news story is fake. It is assumed that the article has been photoshopped to look like 16 people died. The actual facts are as follows:

1. The story is about fourteen people that died in January 1890, not sixteen people.
2. These deaths occurred well before William Branham was born.
3. The bridge was not the Municipal Bridge but was the Big Four Bridge which is close to Tow Head Island in the Ohio River between Jeffersonville, Indiana and Louisville, Kentucky.

LOUISVILLE, Ky., Jan. 9. -- The most appalling accident known here for many years occurred this evening about 6 o'clock. Caisson No. 1, about a hundred yards from the Kentucky shore, used in the construction of the bridge between Louisville and Jeffersonville, suddenly gave way and the men employed in it were either drowned or crushed to death by the stone and timbers. As those working in the pumping station were watching for the men in the caisson to put off in their boats, leaving for the night, they suddenly saw the low, dark structure in the dashing white waves. The life saving station was immediately notified of the accident and three skiffs were manned and pulled to the scene of the wreck. Word was also sent to the police station and a squad was at once ordered to the ground to aid in the work of recovery.

The site of the bridge is at the upper end of the city just below Tow Head Island.

Within an hour from the disappearance of the caisson, three thousand people were on the shore and strained their eyes to see something of the wreckage. Dozens of boats were flying about over the spot where the caisson had stood and life lights danced to and fro with them, but there was not a trace of the massive structure of stone and timbers. It was soon known that only four of the eighteen men who were at work at the time of the accident had escaped.

The last man out of the caisson was FRANK HADDIX. He barely escaped being dragged down by a companion where he was caught waist deep in quick sand. ABE TAYLOR, one of the saved, says he stood nearest the iron ladder by which they got in and out. He heard a rumbling and there was a rush of air. Almost at the same instant, he jumped up the rungs of the ladder, followed by other men. They had hardly got clear of the caisson when the water burst through the manhole, knocking the men all into the river where they were picked up. HADDIX said he saw MORRIS, who was climbing next below himself, swiftly drawn under by the sand and heard his cries for help but could do nothing.

The caisson is not wrecked, as first supposed, but has settled down in the bed of the stream, completely filled with sand and water. The pumping station is hard at work clearing a way to the bodies but none will be reached tonight. There seems absolutely no hope for any of those caught within the caisson. The negroes who escaped say JOHN KNOX, gang boss, had them dig too deep before letting the caisson settle, and the digging was too close to the shoe of the caisson. Just before the accident, KNOX gave some orders to the keeper in charge of the upper door to the exit. He opened this door and the compressed air which kept out the river rushed out, letting in the stream. The men say they were working in ugly quicksand at the time. The caisson was about 40 feet by 20 and built of timbers twelve inches square.