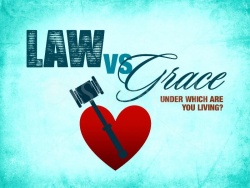 Questions and Answers on Falling from Grace

The following question was received via email and has been edited to reduce its length:

I have viewed your video, "Fallen From Grace" and I do not think you represented Brother Branham fairly. Let alone Paul. Your error I believe is not really knowing what Paul preached and your inability to correctly place what is said.

In your video you claim for William Branham to say boys with long hair and pants hanging down as "fallen from Grace" is anti-Paul's Gospel. Are you sure about this? Did Paul preach that men were to have long hair?

Let us look at what Paul said..

Ye that are justified by the Law ye have fallen from Grace.

Think about it! You declare the long haired boy as JUSTIFIED, while condemning William Branham for saying he is not. Are you sure you know what you are doing? It was Paul that preached against long hair on a man and it was Paul who established the standard which Grace set for men and women. Modesty is in the standards of Paul's grace.

Who's Grace do you think those that heard Paul partook of? I will tell you. It was Paul's Grace they partook of. He was the dispenser of the Grace he had received. He was very clear on this.

If ye have heard of the dispensation of the grace of God which is given me to you-ward... (Eph 3:2)

What Paul was dealing with in Galatians was not what you imagine. Those of the circumcision were endeavoring to enforce on the Galatians "Covenant Law". It had nothing to do with Long hair and being immoral and women, scantly dressed or being arrayed in expensive garb. Those of the circumcision were preaching "The Law" as a means of perfection and acceptance into the covenant. Paul said to adopt the Law.. i.e. Covenant law was to fall from Grace.

On this issue, you are deceived. Liberty from THE LAW is not a liberty to an occasion of the flesh. And, to equate the quotes you presented from William Branham as saying he was preaching "perfection" through dress is simply a fabrication. He never preached perfection was though what anyone wore or did not wear. What you do is obfuscate one issue with another and attribute two lies to William Branham when in fact the very basis of for your reasoning on the first complaint is totally a deception to begin with.

Here is our response: 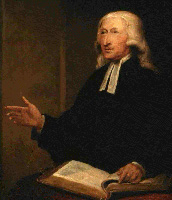 If we accept your doctrine that men with long hair (or hair of similar length to former First-Lady Jackie Kennedy) have fallen from grace, then John Wesley has to be included in that category of people that fell from grace. He had hair longer that Mrs. Kennedy.

But if any man seem to be contentious, we have no such custom, neither the churches of God. (KJV)

But if anyone wants to argue about this, we do not have any custom like this, nor do any of God’s churches. (ISV)

So while short hair may be preferred on a man, it did not seem Paul was overly dogmatic on the issue and certainly does not give it the force of law. In other words, while long hair on a man may not be appropriate based on the scriptures, it does not mean the man has fallen from grace.

Finally, are you misinterpreting what Paul said about grace? Was it Paul's grace that he was preaching or was it the grace of Jesus Christ?

You cannot take one scripture and base a teaching on it. Look at what Paul said elsewhere:

Paul did not say "my grace", he pointed to "his grace", the grace of Christ Jesus.

William Branham said that he preached the same message that Paul preached. In a vision of a heavenly place, he hears his converts shouting “We are resting on that!”

So let’s compare Paul’s doctrine of “Falling from Grace” with what William Branham taught.

Paul wrote in the letter to the Galatians that “whosoever of you are justified by the law; ye are fallen from grace.”

He asked them - “having begun in the Spirit, are ye now made perfect by the flesh?”

Any boy walk around with his britches hanging off his hips, and head hanging back, and his hair hanging down his neck like a Mrs. Kennedy's water-head haircut, and going around like that, as a hoodlum, and then call that American? You've fallen from grace. (THE WAY OF A TRUE PROPHET PHOENIX,AZ 63-0119)

Modern church and their theological paint, have their women all with their glory shaved off, by their some ricky and a pastor that they got, like a Jezebel if there ever was one. Bobbed hair, shorts, paints, all fixed up in a theological taste, that's the way the church stand. Right. But her spiritual character is far from that being the homemaker that Jesus Christ is coming to receive.

If any Christian would marry a woman like that, it shows he's fallen from grace. (THE CHOOSING OF A BRIDE 65-0429E)

So Paul, teaches that when you replace the Holy Spirit with laws and regulations, you fall from grace. That’s why he wrote:

“Stand fast therefore in the liberty wherewith Christ hath made us free, and be not entangled again with the yoke of bondage.”

William Branham, on the other hand, claimed that a person’s outward appearance tells whether they have fallen from grace. Dressing according to William Branham’s standard of what was right is obedience to a law – it is a yoke of bondage that cannot make anyone perfect. You can’t be perfect by the flesh. What justifies us is believing that Jesus Christ gave himself for our sins.

So William Branham taught a different gospel than Paul with regards to what it means to fall from grace.

Paul taught in Romans that “The just shall live by faith”

The Book of Hebrews says that we are “sanctified through the offering of the body of Jesus Christ once for all.”

And the book of Galatians tells us that we “receive the promise of the Spirit through faith.”

This is the gospel that Paul preached – it is a gospel of grace, deliverance and inheritance through faith in Jesus Christ.