Because he said so 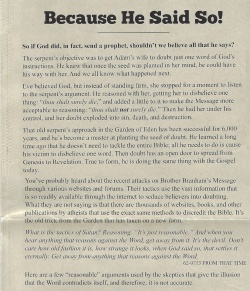 In 2012, Voice of God Recordings published a newsletter entitled, "Because He Said So" in an attempt to offer a defense against those who have discovered William Branham's twisting of scripture, failed prophecy, fictional life stories, and other fundamental issues with the material they publish around the world. It appears that this newsletter has been removed from the website after the repercussions of this publication -- cult followers began to notice that the newsletter was not so much of a defense as it was a blatant attack on the Holy Bible.

What do we think of this publication?

We were recently asked about this newsletter. One ex-cult member giving their testimony mentioned that this was the very thing that made him realize that they are uplifting a man rather than pointing to Christ. Others, curious to see it, are struggling to find it. While for some time this publication was not easily accessible to the public, it has now been republished by Voice of God Recordings.

We plan on discussing each section of the newsletter. Their attack on the Bible presented many questions concerning scripture to readers, and offered little in the way of answers to either the fundamental questions of William Branham's ministry or what Voice of God Recordings considers to be flaws in the Holy Writ.

The first section asks the question: "So if God did, in fact, send a prophet, shouldn't we believe all that he says?" And then, referencing a scripture in Genesis where the serpent deceives Eve through words, proceeds to mislead cult members by using very similar tactics.

The opening question of this article is misleading, as it guides the reader into the assumption that all prophets claiming to be from God are actually from God. Throughout the entire publication, there is one critical element missing: following the scriptures instructions to test the prophets to confirm that they are, indeed, from God. "Dear friends, do not believe every spirit, but test the spirits to see whether they are from God, because many false prophets have gone out into the world." - 1 John 4:1 It is also misleading, because it leads the reader to assume that apologetic websites exposing Branham's failed prophecies would exist even if William Branham was sent by God -- and of the Christians who are dedicating huge portions of their lives towards exposing falsehood, I cannot think of a single one who wouldn't listen to a prophet of God that met the scriptural test. Simply put, William Branham did not. In fact, the very reason this publication was necessary confirms that there are issues in the ministry. The author of this publication would have you believe that by comparing the serpent's tactic of "planting seeds of doubt" to examining the words of a prophet, those who question William Branham are also "planting seeds of doubt." Correctly worded, William Branham planted the doubtful seed, the examiners are the ones who are simply examining the fruits of that seed. I truly believe that the reason this publication is no longer freely available has to do with the trail this author is leading you through the first section. "Doubt has an open door to spread from Genesis to Revelation. True to form, he is doing the same thing with the Gospel today." Cult followers are starting to notice that the vast majority of the people who flee the cult of William Branham are making their exodus into Christian churches that uplift the Bible and would NEVER .. absolutely never .. publish a newsletter that discredits the Bible to make it look worse than the fundamental issues in the message. This article was praised by many in the cult when it was first published, as it made a general comparison between those leaving the message and atheists. This does not sit well with a family who watches their sons and daughters leave to become Christians who love Jesus Christ with all their heart.

The opening statements, with a large, bold, heading "BECAUSE HE SAID SO," sets up the theme for the rest of the publication. It does not matter if a prophecy failed. It does not matter if a lie was discovered -- even if that lie was bound to a (fictional) supernatural event. Because he said so, you are not to question. And those who do are like atheists, because WE [VOICE OF GOD RECORDINGS] say so. 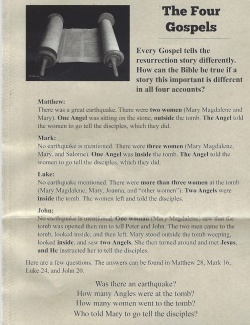 VOGR throws the Bible under the bus

The method used by most fundamentalist or evangelical churches is the belief of "Scriptural Inerrancy." Ironically, this is the same belief proclaimed by Branham cult pastors -- at least until the publication of this article. Many ministers that have proclaimed Scriptural Inerrancy for the past fifty years have now changed their tune: they claim that because their bibles have error, William Branham was justified in his wrongdoing.

The points of contradiction raised by Voice of God Recordings are these:

Those who believe in Scriptural Inerrancy would have no issue discussing these claims to reconcile. In fact regardless of which methodology used to defend the faith, most apologists would simply tell Voice of God Recordings that most of these are not even contradictions. Because one witness felt necessary to describe an earthquake, while others awe-struck that God's only Son had risen did not write about it, is that really a contradiction? Even a non-Christian historian would tell you that this is simply a detail that one account includes and the others do not. The rest of the points Voice of God Recordings attempts to convince their following are "contradictions" are much the same. Those who believe in Scriptural Inerrancy will tell you that one single woman visited the tomb, and returned with more women. And they will tell you that Voice of God Recordings was a bit mistaken about the "two men versus the two angels" -- most Christian ministers interpret the two "men in white" as angelic beings.

But not all Christians use Scriptural Inerrancy in defense of the faith. Other Christians believe that the Bible can be inspired by God while NOT inerrant. This group of Christians would argue with Voice of God Recordings that these were four .. separate .. witnesses testifying to the same event. And any who have watched a court trial calling witnesses to describe an event will bear different results, each from the perspective of the witness. Maybe Matthew was the only one who remembered the earthquake! Maybe Luke, shocked to hear of angelic beings walking the earth, recorded three women instead of two. Does that make his witness testimony of Christ's Resurrection any less valid? The deceptive strategy used in this section by Voice of God Recordings is to lead the reader to believe that because they question the Gospels written by four different men, we should not question the accounts given by one single man: William Branham.

In reality, these are the types of contradictions found in the ministry of William Branham. One man, multiple versions of each story. Not multiple men with a few minor details differing. Those in the cult following of William Branham must ask themselves: Why did Voice of God Recordings change from stressing Scriptural Inerrancy when the public became aware that William Branham contradicted himself multiple times and about multiple unforgettable events? And why have the pastors done the same? Why is it so important to uplift the man, William Branham, that they would start questioning the Gospels proclaiming the life, death, burial, and resurrection of Jesus Christ?

Retrieved from "http://en.believethesign.com/index.php?title=Because_he_said_so&oldid=21859"
Categories:
This page was last edited on 16 January 2016, at 06:00.
Content is available under Creative Commons Attribution unless otherwise noted.
Privacy policy
About BelieveTheSign
Disclaimers
Mobile view