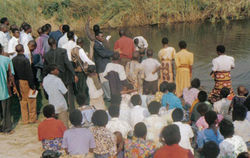 William Branham basically adopted the baptismal formula of Oneness or "Jesus Only" Pentecostalism.

Believers of William Branham's message often challenge those outside of the message to "find one scripture in the Bible in which anyone was ever baptized in the name of the Father, Son and Holy Spirit."

The question is whether this is true from a biblical perspective.

Scriptures referring to how baptism was conducted in the New Testament

In Matthew 28, Jesus told his disciples:

Go therefore and make disciples of all nations, baptizing them in the name of the Father and of the Son and of the Holy Spirit, teaching them to observe all that I have commanded you. And behold, I am with you always, to the end of the age.” [1]

But surprisingly, there is no biblical record that anyone was baptized using this formula. Rather we read the following:

Then Peter said unto them, Repent, and be baptized every one of you in the name of Jesus Christ for the remission of sins, and ye shall receive the gift of the Holy Ghost.

For as yet he was fallen upon none of them: only they were baptized in the name of the Lord Jesus.

And he commanded them to be baptized in the name of the Lord. Then prayed they him to tarry certain days.

When they heard this, they were baptized in the name of the Lord Jesus.

For has many of you as have been baptized into Christ have put on Christ.

What is clear is that, from the historical record, there did not appear to be an emphasis on the exact formula of baptism.

William Branham took the basic teaching from the Oneness movement on baptism and made it more restrictive. He effectively taught that there was only one baptismal formula - his followers were required to be baptized "in the name of the Lord Jesus Christ."

Now, when you Oneness brethren just baptize in the Name of Jesus, there’s just many Jesuses; but there’s only…He was born Christ, the Son of God. He…That’s His Name, that’s what He is. Christ means “the anointed one,” Messiah, Christ. Now, “Jesus,” eight days later He was given the Name, Jesus, when He was circumcised. And He is our Lord. So He is our Lord Jesus Christ. That’s what He is.

Now, show, that you’ll see that Peter had the revelation I’m trying to tell you, now look at these—these boxes on this side: Father, Son, Holy Ghost. That’s what Matthew said. Ten days later Peter said, “Lord Jesus Christ.” Now, see if these three titles isn’t three names, or—or, the one Name of the three titles.

Now, look. Matthew said, “Father.” Is that right? The…Peter said, “Lord.” Now, David said, “The Lord said unto My Lord.” Now, they both said the same thing there, didn’t they? All right, “Thy Lord…Lord thy God is one God” is true.

Father, Son, and Holy Ghost are just titles. They are not names. That is why we baptize in the Name of the Lord Jesus Christ, for that is a name, not a title. It is the name of those titles, just like you take a new born baby who is a son and name him. Baby is what it is, son is the title, then you name him, John Henry Brown. You just don’t baptize in “Jesus Name.” There are thousands of Jesuses in the world and have been even before Jesus, our Saviour. But there is only one of them born the Christ, “Lord Jesus Christ.”[4]

William Branham differentiated himself from Oneness Pentecostals by requiring baptism in the triune name of the "Lord Jesus Christ."

William Branham's initial view was that it didn't matter whether you were baptized in Jesus' name or in the name of the Father and of the Son and of the Holy Spirit:

If you'd just forget… And them that wants to be one way let them be, and you go ahead and be brothers. That's all. Don't… What done it, was breaking among—breaking away (See?), breaking, tearing up, breaking up brotherhood, setting out and separating yourselves. No, sir; we're not separated; we're one. That's right.[5]

He also repeated this very clearly in his vision of the plum and apple trees.

But later, he appeared to change his mind. For example, on January 8, 1961 William Branham stated that a Trinitarian baptismal formula was wrong. But note that he was preaching this in his home church:

Now, do you say then, "Do you believe that all these people that—that's trinitarians are of hell?" No, sir. I believe they are Christians. But the hour is approaching, brother, where they are sincerely wrong. Any man, anywhere, anytime, that wants to talk on the subject, come to me; any minister, bishop, archbishop, whatever you might be. And this is taped, will go around the world. I ask in brotherly love, for any person that hears me on this tape around the world, that will come to me and show me one text of Scripture or one paragraph in any history (that's authentic history) where that any person was ever baptized in the name of the "Father, Son, and Holy Ghost" until they organized with the Catholic church, I'll change my doctrine. Every person was baptized in the Name of Jesus Christ! And my precious brethren, your eyes are blinded to those things. Pray God give you Light! Now, if you got Scripture to support it, I'll be looking for you or listening for your call. You're… you… Beyond this tape, you're willfully walking in spiritual ignorance if you don't challenge me on that. If you want to know what's Light and what's dark, let's ask God. Remember, I say THUS SAITH THE LORD! If you believe me to be His servant… And if that wasn't according to the Word, it would be wrong. Then if it isn't according to the Word, it's your duty to come straighten me out, uh-huh, see what happens. Uh-huh. It's a error! 178 I believe that many thousands of trinitarian people who believe in three Gods is saved, because they don't know any difference. We're going to get to that on down in the message.[6]

But just a few months later, he changed his tune because his audience was different. He was now preaching in Chicago:

I have made my mistakes, brethren, and I've done so many things that's wrong. And if any time along the road I've brought, or you have heard something that I might've remarked or said that give an offense of some kind, or if I said something this morning that give an offense, I ask you as a Christian brother, sister, forgive me. I don't mean to do it. I've only expelled to you my heart so that we would know. If there's any baptizing to be done, you brethren do it yourself. See? That's… I don't do it. If I have, that's the way I'll baptize one, like that. Either one of you can take it. See? So you can take the person they're baptized in the Name of the Father, Son, and Holy Ghost, and they're baptize in the Name of the Lord Jesus Christ too. So if I ever baptize one… But I haven't done it yet. I have only baptized in my own church, and that's just the people there. And that's the way the people at my church are baptized. If you'll look back, that's the old Missionary ritual, the old Missionary Baptist ritual. And now, if… Now, that's that.[7]

The question must be asked - Why did William Branham change his opinion based on who he was preaching to?

Why does Jesus say to baptize one way but Luke tells us a different way?

Various answers have been given.

What is clear is that the effects of baptism were attributed to the water and not to an exact formula of words. The Didache, Justin Martyr (c. 100–165), and Cyprian (c. 200–58) describe a baptism with the trinitarian formula as a baptism “in the name of Jesus.” A compulsory liturgical form is far removed from early times.[9]

...and Peter, being filled with the Holy Spirit identifying the NAME as that of "the Lord Jesus Christ". Of course, nobody was ever baptized in Scripture using that formula, and Peter said "name of Jesus Christ", and omitted Lord if he had a revelation to share God's unique name.

WMB stated that " The Name of The Father,Son and Holy Ghost is The One and only LORD JESUS CHRIST. "

Then the Bible is wrong, because it NEVER calls the Father or the Holy Ghost Jesus Christ. Jesus is called, "Lord" all the time.

And in Exodus, God says that His name is Yahweh and THAT will be His name FOREVER.