Followers of the message often point to the dead being raised in William Branham's ministry as vindication for his status as a prophet.

However, we have been unable to find any evidence that anyone was ever raised from the dead through William Branham's prayers.

William Branham said he had documentation

And then you notice down at the bottom, it had… did you read the little, little inset at the bottom, about raising the dead? Now remember, before you publish anything, you have to be able to prove that. So we’ve got documented statements from doctors, mayors of the city, and so forth, like that, that doctor’s pronounced them dead and gone for as many as eight and ten hours and coming back to life again, through prayer. So it’s a documented statement. This book goes all over the world and translated in different languages and everything. It’s like the Reader’s Digest, amongst the Christian people. And it has to be authentic and has to prove those things when you say them.[1]

Now, I have never healed anybody in all my life. But I have seen the Lord heal tens of thousands, of documented statements from doctors and great hospitals like Mayos’. And—and I have seen Him in my short ministry of twenty-eight years for Him, with documented statements, raise up four dead people to this day, that had done passed beyond the curtain of time and was raised. Which we have the statements from the doctors, that—that pronounced them dead and back to life.[3]

Voice of God Recordings was contacted and asked for copies of these documented statements. The response was that the documents have all been lost.

Did the documents ever exist? Isn't there even one piece of evidence? It does not appear that any exists. Given William Branham's questionable credibility, can we believe him?

No evidence in newspapers

On the left is an article in the July 23, 1947 edition of the Jeffersonville Evening News, which states: 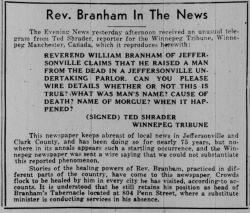 Rev. Branham In The News

REVEREND WILLIAM BRANHAM OF JEFFERSONVILLE CLAIMS THAT HE RAISED A MAN FROM THE DEAD IN A JEFFERSONVILLE UNDERTAKING PARLOR. CAN YOU PLEASE WIRE DETAILS WHETHER OR NOT THIS IS TRUE? WHAT WAS THE MAN'S NAME? CAUSE OF DEATH? NAME OF MORGUE? WHEN IT HAPPENED?
(SIGNED) TED SHRADER
WINNEPEG TRIBUNE

This newspaper keeps abreast of local news in the Jeffersonville and Clark County, and has been doing so for nearly 75 years, but nowhere in its annals appears such a startling occurrence, and the Winnepeg newspaper was sent a wire saying that we could not substantiate this reported phenomenon.

Stories of the healing powers of Rev. Branham, practiced in different parts of the country, have come to this newspaper. Crowds flock to be healed by him in every city he has visited, according to accounts. It is understood that he still retains his position as head of Branham's Tabernacle located at 804 Penn Street, where a substitute minister is conducting services in his absence.

Claims of people raised from the dead by William Branham

A man pronounced dead by three doctors, raised to life... where is the evidence??

And by the way, a man that laid in the morgue, pronounced dead by three doctors when I went in to where he was at, he’s driving a Pennsylvania locomotive tonight, and still they don’t believe. That’s true. That is true. They won’t believe.[4]

Now, I remember of one case…If someone would want a copy of the paper, it may still be obtained of the “Arkansas Gazette,” called the “Sun.” It’s on the Associated Press, a big paper, circulates many many thousands of subscribers. Well, there stood on the platform…her picture. If you wish to, you might write to her and get a copy, if you want to. And perhaps there might be a reporter standing around (which I know there is), so you can write yourself; be satisfied. All right. Notice, on the front page, you’ll see a great big page, all the way across the front of the page, picture, a woman pronounced dead, laying in the line, bringing from the hospital with cancer of the heart, colon, and liver; and told the nurse and them that was bringing her, pushing her through the streets from Phoenix, Arizona; that the doctors told her husband who…Her name is Mrs. Hattie Waldrop, she lives on... ? ...street in Phoenix, Arizona. Her husband owns a big plumbing establishment there.

In 1950, William Branham claimed there were 3 people raised from the dead in his ministry:

Just think, friends, that in the ministry that I have had from the Lord alone, I’ve seen many, many, many times more miracles performed than is written in the Bible, that Jesus Christ has done in these three years, in one unit, one group of His ministry. One group, He’s done more miracles than has been written in this Bible. Everything that could be written in the Bible except leprosy, that I know of, has been healed, even to three specific cases of people who were pronounced dead, are living tonight, healthy and strong. Who did that? Jesus Christ. He’s the same yesterday, today, and forever. And He’s here tonight. And He, Jesus, was the Rock that was in the wilderness that followed the children of Israel.[5]

Now, that’s three times that I’ve seen that done. Maybe I can get to it later when Mrs. Hattie Waldrop here in Phoenix, and Ralph Perry at home. Now…That I mean’s been pronounced dead, laying out…This boy, when I started in… [6]

Hold it... maybe one of their names was Mrs. Morgan? Wouldn't you think you would remember the names of the people raised from the dead:

...I know Mrs. Morgan, Mayos’ nurse, give up with cancer years ago, laying on the dead list right now. And go to Louisville, Kentucky, and look and see if she hasn’t died, eight years ago. And come over Jeffersonville Hospital and look at her nursing now. And so, she was supposed to have died eight years ago. Dead, done pronounced dead, and laying there yet still on the dead list in Kentucky, of cancer research. And then, when she was there, she felt sorry for that man, because he was—looked so much like her husband. And I seen a vision of him walking.[7]

It's still 3 people raised from the dead in this sermon from 1955:

I have seen Him in my ministry of ten years heal tens of thousands of people, blind, crippled, twisted, lame, halt. I have seen Him raise three people up from the dead after they were pronounced dead, two of them in the United States and one of them in Helsinki, Finland. Why, I’m sure you have heard of that. It swept over the world.[8]

And I could bring you statements to show of four different people, that, pronounced dead by doctors, after prayer and rebuke of death. See? We stand in there to rebuke that thing. And if God gave you power to do something, you better be careful what you’re doing. See? You better be care-…He said, “Don’t…”[9]

I say this, with—with Christian sincerity. I suppose, if I could write down every instance that taken place that I have seen Christ do since I been a minister, I couldn’t pile a volume of books that high. I have witness of doctors’ statements, of five people being pronounced dead, laid out dead, and come back to life again, by prayer. See? Many that they claim they did, and I—I couldn’t say that. I wouldn’t say it ’less there’s some way to prove it, you see, and to know it. But seen them, after being dead for hours, days.[10]

We have been unable to locate this article in Voice of Healing magazine. This is a chance for followers of William Branham to prove someone was raised from the dead. We will publish the article if you can find it!

The doctor signed the witness which appears in the men’s Voice Of Healing. “The baby died with double pneumonia, that morning at nine o’clock, in his office, pronounced dead, no respiration; had been laying in the rain all day, dead, and was healed.” Is alive today, as far as I know, living to the Kingdom of God.[11]