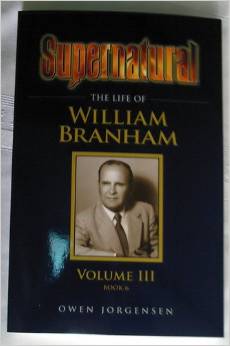 This article is one in a series relating to "Supernatural: The Life of William Branham" - you are currently on the topic that is in bold:

It comprises six volumes and is taken almost exclusively from the sermons of William Branham with absolutely no critical thought on the part of the author.

Every event in this book happened. Many of these stories are well documented from multiple sources. In my research I made use of newspaper and magazine articles, books, photographs, films, and testimonies by people who knew William Branham personally and were eyewitnesses to some of the supernatural phenomenons (sic) described in this biography.

We take exception to the above statement. Why?

Jorgensen's use of corroborating evidence is almost non-existence with the bibliography for Book One limited to:

Examples of errors resulting from a lack of proper research

The lack of credible research is reflected throughout the book on an almost constant basis. For example:

Failure to deal with significant issues

Well over a hundred significant issues relating to William Branham and his message have been identified. Yet, Jorgensen does not deal with any of these major issues in his pseudo-biography.

A few examples of issues he failed to research or comment on include: