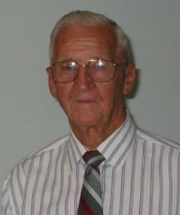 Jack Lunsford traveled from California to Tucson, Arizona in 1963 to attend one of Rev. William Branham's meetings. Jack had been a soldier with the U.S. army during WWII, and had seen action on the front lines in Germany. While he had made if back alive, he suffered from what is now known as "shell shock", and had also experienced a nervous breakdown.

Gene Hamby, a friend from church who had colon cancer, accompanied Jack to Tucson. Both Jack and Gene received prayer cards, and Gene was called to the front during the service "Be Not Afraid". The audio recording of this service records how William Branham identified both of these men whom he had never met:

Now, here's a man. We're strangers to one another, but Jesus Christ knows us both. Do you believe Him? You believe me as His servant? You will? Now, when Jesus met a man, it was--we find Him doing a miracle on, was Simon, wasn't it? That's the first man He met. All right. He told Simon what his name was. Now, the Lord help me to know something that's wrong with you, that it is... Yes, I see it now. It's an intestinal trouble: colon. It's an inflated colon. You're not from here either. You've come from the west this way; you're from California.
There's somebody with you. He's got a prayer card to be prayed for tonight. He's setting out there now. He's your friend, and he's suffering with a nervous condition, like a nervous breakdown. You believe he's going to get healed? So do I. You believe now that Jesus can tell me what your name is? Mr. Hamby. Then return back, lay your hands on your friend, and believe with all your heart, and you can both go back and be well in the Name of the Lord Jesus Christ. Do you believe? Now, pray. (Be Not Afraid, June 7, 1963, Tucson, Arizona)

Gene was instantly healed of colon cancer, and Jack went from having shock therapy, and even being placed in a mental ward for a period of time, to living with his family in his right mind. Jack's son David, was also able to attend William Branham's meetings, and witnessed some incredible healings.<mediaplayer>GeneHambyHealing.mp3</mediaplayer>