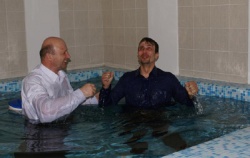 The joy of Baptism in Sakhalin Island, Russia: a clean heart and identification with Jesus Christ.

The Jewish Ritual of Baptism

Immersion in a ritual bath (Mikvah) is required for "ger tzedek" (converts to Judaism) as part of their conversion. Other rituals for conversion to Judaism include circumcision and an understanding and observance of all the relevant laws.

In the Tanakh, and other Jewish texts, bathing for ritual purification was established for specified circumstances; in order to be restored to a condition of 'ritual purity'. For example, Jews who become ritually 'defiled' by contact with a corpse (according to the Law of Moses), had to use the mikvah before being allowed to participate in the Holy Temple. Through practices such as these, immersion in the mikveh represents purification and restoration, and qualification for full religious participation in the life of the community. (See Book of Numbers Chapter 19)

In modern times, the adherence and observance of the laws, rituals, and customs regarding the mikvah differ greatly among the Jewish denominations. The only modern exception is that after menses, women need to immerse in a mikvah in order to be permitted to her husband.

John the Baptist, a prophet who preached before Jesus started teaching, foretold the soon coming of the Messiah. John was called the Baptist, as he and his disciples would baptise (immerse in water) those who believed his message of repentance for the remission of sins. Jesus himself was baptised by John the Baptist.

Historical evidence of baptism in the Early Christian Churches

NAME was an ancient synonym for “person”. Payment was always made in the name of some person referring to ownership. Therefore one being baptized in Jesus’ name became personal property...The early church always baptized in the name of the Lord Jesus Christ until the development of the Trinity Doctrine in second century...Christian Baptism was administered using the words, “IN THE NAME OF Jesus.” (Vol.2, Pg. 377)
Baptism was always in the name of “Lord Jesus” until Justin Martyr when triune formula was used. (Vol. 2 Pg. 389)