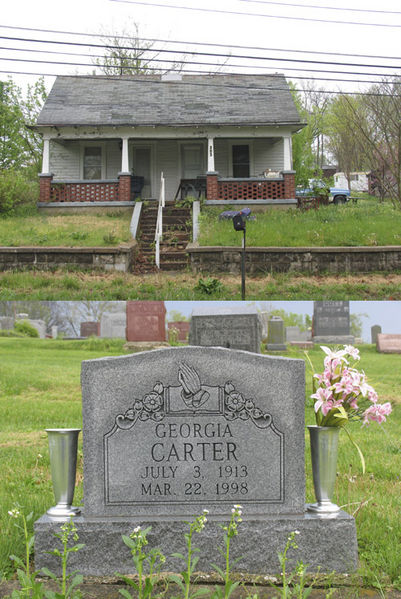 One night I come home; I was laying in my bed. If you want to write for these testimonies, I'm giving you addresses. You write to Georgie Carter, Milltown, Indiana, and it'll--it'll go to her: Georgie Carter, Milltown, Indiana. And she belonged to a church that did not believe in Divine healing. She was taking piano lessons when she was a little girl, and her Uncle was taking her to this--to a piano lesson. And when he did, this man, being a full grown man, and her a little girl, ravished the child. And when it did, it give her TB. And she'd been laying nine years and eight months on the flat of her back with TB of the female glands, all through her body and into her lungs. And she approximately weighed thirty-seven pounds. I think that, what they could weigh her...

When little Georgie Carter had been laying in the bed down there for nine years and eight months, down thirty-five miles down the Southern... Never heard of the city in my life, little place. The Lord gave a vision. Went down there and healed her. She come up off the bed after laying there nine years and eight months and weighed thirty-five pounds. If you'd like to write to her, you can have--write to her. Miss Georgie Carter, Milltown, Indiana. She's my pianist at the Milltown Baptist church, now.

Sermon: Jesus on the authority of the Word, Wood River, Illinois, February 17, 1954.

Click on a date/time to view the file as it appeared at that time.

You cannot overwrite this file.

The following 2 pages use this file:

This file contains additional information, probably added from the digital camera or scanner used to create or digitize it.

If the file has been modified from its original state, some details may not fully reflect the modified file.