Do message believers place the message above the Bible? 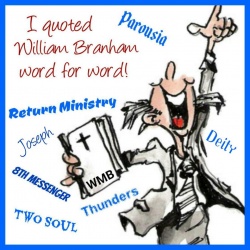 It is clear that some followers of William Branham believe that he was Jesus Christ. But what most in the message do not understand is that they themselves put his sermons above that of the Bible because they believe that he was infallible. These groups would not only include virtually all of the followers of Joseph Branham but the vast majority of those following William Branham's message in all of its various forms.

How the message is exalted

While such people may think that they place the Bible above William Branham's teaching, this is in fact not the case. In fact, the opposite is true. William Branham's message ALWAYS trumps the Bible. Why? Because here is what they actually believe:

So the answer is "YES", the followers of William Branham hold his teachings above that of the Bible.

In the Psalms, David says:

I bow down toward your holy temple and give thanks to your name for your steadfast love and your faithfulness, for you have exalted above all things your name and your word.[1]

If you believe the message of the Bible, and the present Message of the day, a vindication of It; the reason you are sitting here, because you were predestinated to set here. You wouldn't have been here, otherwise; you would have been on the street, maybe drunk, some of you; and some of you out here and running around with some other man's wife; and you women out, married, and running around with some other women's husband, or something like that. See, but you were predestinated to be here. See, you can't help it. You have a Father, He is God, and you were a seed.[3]

If we once get above our Bibles, and cease making the written Word of God sole rule both as to faith and practice, we shall soon lie open to all manner of delusion, and be in great danger of making shipwreck of faith and a good conscience. Our blessed Lord, though He had the Spirit of God without measure, yet always was governed by, and fought the devil with, 'It is written.'[4]

But if you've sold your inheritance, if you sold out and done these things… What am I saying? Return back. If you joined up with some cult that tries to keep you away from fellowship with other brethren, leave the thing. This is jubilee. Amen. I feel religious. Return. Return. This is jubilee. Don't let it pass by. Remember, don't let it pass by.[5]

There had to come forth, must come forth; God ordained it so, that there must come forth, them Seven Seals must be opened. It was supposed to be done in this Laodicean age. And I think, beyond any shadow of doubt… Not as we brag; we have no brag, only on Jesus Christ; none of us. We only brag on Jesus Christ. But we are thankful with the… for the privilege of knowing by any… beyond any shadow of doubt, God has chose us in this last days, and has proven it by the signs in the Heavens and in the earth; and every one of them coming right straight back to the Word, to prove that it's so, this age that we live in, the Message and how It is. We're not a cult. We're not a bunch of fanatics. We are servants of God, that's been called by the Holy Ghost. You'll have all kinds of names tacked to you, but that don't mean it's so.[6]

Retrieved from "http://en.believethesign.com/index.php?title=Do_message_believers_place_the_message_above_the_Bible%3F&oldid=23824"
Categories:
This page was last edited on 20 April 2019, at 01:19.
Content is available under Creative Commons Attribution unless otherwise noted.
Privacy policy
About BelieveTheSign
Disclaimers
Mobile view