Jump to content
From BelieveTheSign
(Redirected from Did William Branham prophesy his own death?)

The circumstances of William Branham's death

On December 18, 1965, William Branham and his family (all except his daughter, Rebekah) were returning to Jeffersonville, Indiana from Tucson, Arizona for the Christmas holidays.

About 6.2 miles west of Friona, Texas, just after dark at 8:15 PM, Branham's 1964 Ford station wagon collided head-on with a 1956 Chevrolet that was headed westbound. The driver of the other car, 17-year-old Santiago Ramos, died at the scene and the other three passengers, Rodolfo Melendez, Raynaldo Melendez and Daniel Cocanegra, were severely injured. Branham's wife was seriously injured and their daughter, Sarah, who was laying in the back seat, was also injured. Branham's left arm was mangled and caught in the driver-side door, and his left leg was wrapped around the steering wheel. After about 45 minutes, Branham was pulled from his car and transported to the hospital at Friona, and then later transported to the hospital at Amarillo, Texas. He lived for six days after the crash, dying on December 24, 1965 at 5:49 PM. His body was returned to Jeffersonville, Indiana for burial and was finally buried on April 11, 1966, Easter Monday.

Did William Branham prophesy his own death?

William Branham stated several times that God could kill him if he did not speak the truth. In fact, he stated less than one month before he died:

That is Truth! God has the authority to kill me, before these people across the nation.[1]

Did William Branham bring about his own death in 1965 by challenging God? Was his death simply God's response to his comment that if he was in error, God should strike him dead?

Three times in the month immediately before his death, William Branham said that God had the authority to kill him if he wasn't telling the truth (see quotes below).

Within a month, William Branham was dead.

Were you aware that William Branham was approached by Gordon Lindsay several months before his death and warned that several prophecies had been made that if he did not stop preaching error, God would take his life? Did Kenneth Hagin also prophesy William Branham's death because he was in error?

The details of these prophecies can be found in our article on the Hagin Prophecy which Gordon Lindsay related William Branham shortly before he died.

What happened to William Branham's body after his death? 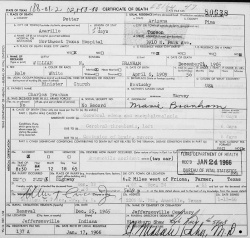 After William Branham's death on December 24, 1965, Pearry Green confirmed that his body was embalmed and kept in a freezer prior to the funeral.  It is standard practice, as otherwise, the body would decay.

The embalming process involves injecting embalming fluid into an artery while blood is drained from a nearby vein or from the heart. The two gallons or so needed is usually a mixture of formaldehyde or other preservative chemicals. Chemicals are also injected by syringe into other areas of the body.  This is done to slow down the process of decay.

The embalmer would then insert a long, pointed, metal tube attached to a suction hose into the body close to the navel. This is used to puncture the stomach, bladder, large intestines, and lungs. Gas and body fluids are withdrawn before more embalming fluid is injected into the torso. Again, this is done to slow down the inevitable process of the decay of the body.

Incisions and holes made in the body are sewn closed or filled with “buttons.” The body is then washed, dried and put into cold storage.

Was the driver of the other car drunk?

The driver of the other car 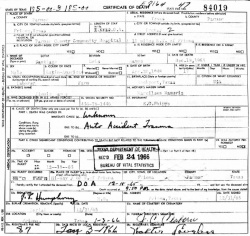 The driver of the other car

While many in the message have repeated the story that William Branham was killed by a drunk driver, there is no proof that this was the case. The driver of the other car may have fallen asleep or perhaps Willliam Branham was distracted and drove into the other lane. This latter possibility is suggested by William Branham's daughter, Sarah, who was in the car at the time. In an open letter which she wrote in July 1989, she stated:

I know my father was a very cautious driver, always keeping speed limits and observing the traffic. Under normal circumstances, he would have reacted and avoided the car coming towards him. While speaking, he looked over to mother during this unpleasant conversation. Just then it happened.

So it is quite possible that William Branham veered into the other lane while he was looking at his wife.

What is clear is that there is no proof that the driver of the other vehicle was drunk.

There is a story that has been propagated by some Message ministers that none of William Branham's bones were broken as a result of the accident. There is no information that would support that. In fact, from the newspaper reports it is clear that William Branham's legs and arms were fractured and that that his skull was fractured as well. 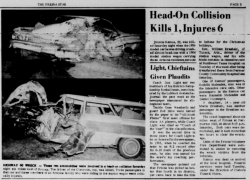 Description of the photograph: HIGHWAY 60 WRECK — These two automobiles were involved in a head­-on collision Saturday night six miles west of Friona. The driver of the Chevrolet, top, was killed. Three passengers In that car and three members of an Arizona family who were riding In the station wagon were criti­cally injured.

Jimmie Ramos, 22, was kill­ed Saturday night when the 1956 model car he was driving crash­ed almost head­one with a 1964 model station wagon carrying three Arizona residents enroute to Indiana for the Christmas holidays.

Rev. William Branham, of Tucson, Ariz., driver of the station wagon, and his wife Meda remains In Intensive care at Northwest Texas Hospital on Tuesday of this week after being transferred there from Farmer County Community Hospital late Saturday.

One of Ramos' passengers, Rodolfo Melendez. also was in the Intensive care unit. Other passengers in the Ramos car were Raynaldo Melendez and Daniel Cocanegra.

A daughter, 14 ­ year old Marie Branham, was another passenger In the Branham automobile.

The crash happened about six miles west of Friona at Par­ merton Hill, at about 8:15 p.m. Saturday. Both cars were de­molished, and it took more than two hours to clear the wreck­age.

Units of the Friona Volunteer Fire Department were sum­moned to assist in removing the wreck victims from the vehicles.

Ramos was dead on arrival at the local hospital. Funeral services were held Tuesday, under the direction of Claborn Funeral Home.

And the Seven Seals of God, when It was opened there on the mountain, God will let me die right now at this pulpit if That ain't the Truth. And I foretold you, a year and six months before it happened, what He told me, "Go to Arizona," and what would happen out there in the desert. And there's men setting right here, tonight, was standing right there and present when the seven Angels come down. And even mag-... The magazine, Life magazine, packed the article of It. It's right there in the observatory, everything. Now they don't even know what It's all about.[2]

Excuse the expression; but that day, setting there in that woods (and God's my judge, and I could fall dead on this pulpit), when that Scripture had stumped me all my life... setting there that morning in the woods, and I was thinking on that, and that Voice spoke to me, He said, "That Scripture is like all Scriptures, It's true."

Why? That is Truth! God has the authority to kill me, before these people across the nation. Many of you here and in Jeffersonville, I can hear the tabernacle ring out now, "Amen!" because they're setting right there listening at it. See, because it's the Truth! What is it? It's when the God, by His sovereign grace; it happens! Outside of that, it won't happen.[3]