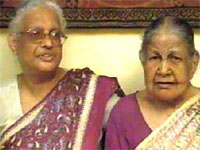 Damayanti Anchan was 8 years old when she attended William Branham’s meetings in Bombay in 1954. Her mother, Grace Mabin, was also present at these meetings. Damayanti Anchan's testimony is told first hand, and she interpreted her mother's testimony from the Kannada language.

“My mother, Grace Mabin, took me along with my brother. The place was very crowded and we could not get inside the Church, but a Pentecostal Brother D. D. Mabin, a member of the local committee, who was acquainted with us, took us along with other Protestant families staying in the same building in Bombay. The meetings were in Hume Memorial Church opposite Nagpada Police station.

Being a volunteer for the meetings, Brother Mabin took us inside the Church and we got place to sit in the balcony of the Church. In front of the altar, there were many sick people and some were on stretchers. I can remember that after the last prayer was said, Brother Branham would get so weak that he was about to fall and the ushers had to pick him up and take him away.

I took my two children, one on each hand and went to the meeting. As there was a big crowd, we went into the balcony and sat there and I could see everything that was going on in the front.

People were on stretchers and many sick people were kept in front of the altar. A blind man came. Brother Branham asked him, “What do you want?” He said, “I want my sight.” Brother Branham prayed and he could see.

Then there was a woman who was deaf by the name of Martha. She was called ‘deaf Martha’, and had come from Udipi, South Kanara, Karnataka State. Brother Branham asked her, “What do you want?” She said, “I cannot hear.” Then Brother prayed and spoke into her ear and she could hear.

Many other sick people were healed. At the end of the service, they lifted up Brother Branham and took him because he was about to fall. He lost his strength. The meetings were for three days in this Church.

Retrieved from "http://en.believethesign.com/index.php?title=Damayanti_Anchan&oldid=21007"
Category:
This page was last edited on 25 August 2015, at 04:11.
Content is available under Creative Commons Attribution unless otherwise noted.
Privacy policy
About BelieveTheSign
Disclaimers
Mobile view