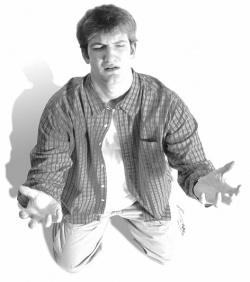 Can you tell whether someone has the Holy Ghost? William Branham clearly was conflicted here because he couldn't seem to make up his mind.

From a question posed to William Branham:

To which William Branham responded:

Yes - you can tell... or at least William Branham could

31 You let me talk to a man two minutes; I can tell you whether he's received the Holy Ghost or not. So can you. It separates them; It's a Mark; It's a Sign. And the Holy Spirit is a Sign. [2]

I have many Anglican friends who has the Holy Ghost. I have many Methodists… I just helped lead four hundred Lutherans to the baptism of the Holy Ghost. See? And so there's a whole Bethany College received the Holy Ghost at one time. So, see, it—it's not a—an organization, it's an experience for anybody that wishes it.[3]

Yes - you can tell by the fruits of the Spirit

In 1963, it was clear that William Branham believed that the presence of the fruits of the Spirit indicated whether a person had the Holy Spirit or not:

You see, that's the reason I have different with the move of the Pentecostal brethren in that manner that they say, "If a man speaks in tongues, he has the Holy Ghost." I different. That's no sign he's got the Holy Ghost. See? I've heard devils speak with tongues just as fast as they could, drink blood out of a human skull, and call on the devil. 245 I've seen Indians take snakes and wrap around them in the—in the—in the rain dance out there in Arizona, hold their hands up like that, and run right around; the witch doctor come out lancing himself, and lay a pencil down, and it write in unknown tongues and give the interpretation. So, see? So don't—don't tell me that. No, I'm too old for that. See? So… The—the fruit of the Spirit is the… Jesus said, "By their fruits (not tongues or emotions, but) by their fruits ye shall know them." So that is the fruit of the Spirit. It's God unfolding Himself in humility, sweetness, and every day the same. It's something about a man that stays right with the Word, every time that he sees the Word, he punctuates it with an "Amen," no matter what the other people say. That's… He believes it. You see?[4]

No - the fruits of the Spirit aren't the indicator

Yes - the evidence of the Holy Spirit is believing William Branham

A month later, William Branham appears to have changed his mind once again.

This time he pointed to himself as the only way to receive the Holy Spirit. Not the fruits of the Spirit, not simply believing and accepting the Spirit of Christ as was promised to all believers. You have to believe William Branham. Is that really scriptural?

And if someone says they believe William Branham but covers up the sexual abuse of a minor (as the pastor did in the church we attended), do they have the Holy Spirit? You think????

Wait... I was wrong... Yes, you can tell by the fruits of the Spirit

Just prior to William Branham's death, he appears to have reverted to saying that the fruits of the Spirit are key:

It's what I was trying to say last night, that spirit can be baptized into that Spirit and still not be a Christian. See? You're living right off of the same Life, but the fruits you bear tells what you are. See? That's right. See? They can do all the signs, and pray for the sick, and heal the sick, and open eyes, and cast out devils, and—and do all these things, living right off of the same Life that's in there, but still it's a lemon. See? That's right. "The fruits, you're known," Jesus said. And so then we find out…[8]