Difference between revisions of "Is God fair?" 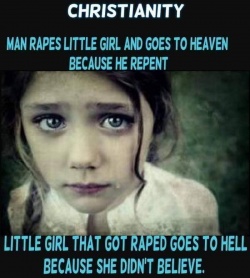 Some people who leave the message (or another Christian cult) move on to reject any concept of God. They are opposed to the very concept of Christianity as a result of their prior bad experiences and become atheists or agnostics. This is quite understandable given the deception, lies and spiritual abuse they experienced while in the message.

The purpose of this series of articles is to present a reasoned response to some of the questions relating to Christianity and God that former ex-message followers have presented to us. We certainly understand their pain and how this has led them to doubt the existence of God and the good news that Jesus Christ brought to the world.

Click on the link below to go to the specific topic. You are currently in the article that is in bold.

The meme at the top right of this page represents the fundamental principles outlined in Christianity which can lead to this scenario.

The non-Christian simply asks the question after one reads the meme: Is this fair?

And of course, as presented, it isn't fair.

The reasoning behind the meme: A person is saved when they repent and believes, which could happen with a rapist or murderer. But a person is condemned if he or she doesn't believe, as in the example of the rape victim who dies in an unbelieving state.

Is this argument valid?

The meme and the argument presented have a couple of significant problems.

The meme presents a distorted view of Christianity that is not an adequate representation of what Jesus actually taught.

What did Jesus teach?

The view presented in the meme is one that message followers are familiar with There are some segments of Christianity that follow "decisionism", numerical success, and church "bigness" as being representative of what Jesus taught. [1]